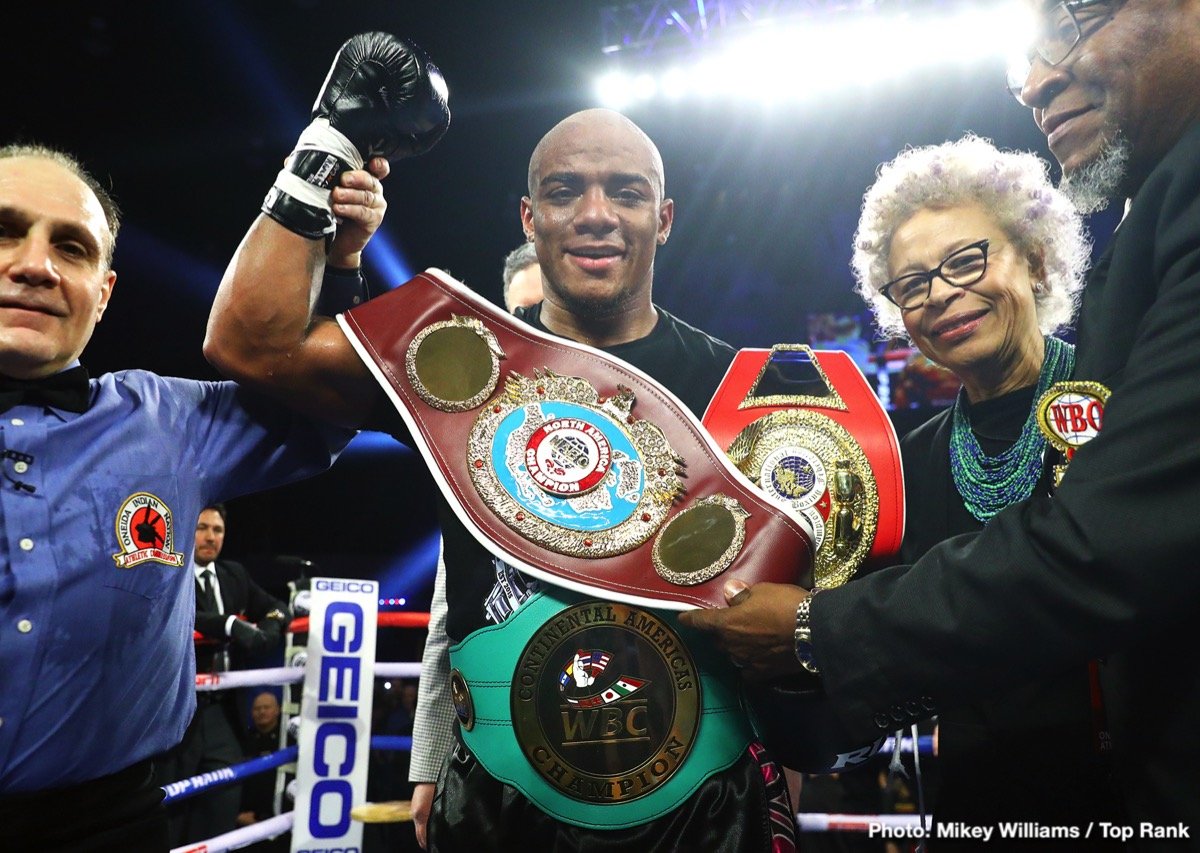 Undefeated heavyweight, Oscar “Kaboom” Rivas scored a dramatic twelfth round technical knockout victory over Bryant “B.Y.” Jennings. Rivas pinned Jennings on the ropes and landed a massive left, right hook and then followed up with several unanswered combinations that knocked Jennings to the canvas. He barely beat the ten-count. Rivas immediately landed a couple more powerful shots on a defenseless Jennings which forced referee, Gary Rosato to stop the fight with fifty-four seconds left in the round.

This fight card was promoted by Top Rank Boxing and was televised by ESPN + from Turning Stone Resort and Casino in Verona, New York.

For the first seven rounds, neither fighter did much of anything to really separate themselves from the other as the momentum swung back-and-forth in this competitive bout. Rivas was the aggressor as he continuously stalked Jennings. He was also the more active fighter, however, the vast majority of his punches were blocked by Jennings, who displayed great defense for the first eleven rounds. Rivas connected the harder shots, while Jennings got the better of the exchanges and displayed a more effective jab, yet he did not throw a lot of punches.

Jennings turned the fight around in his favor in the eighth round as he fought with more of a sense of urgency and finally started to throw punches at a faster rate. He connected on several powerful combinations and was now the one pressing the action. It also appeared that Rivas was beginning to tire as his offensive output started to slow down. Jennings controlled the next three rounds while the twelfth was fairly close before the knockout. Rivas was ahead on two of the scorecards (106-103 and 105-104) at the time of the stoppage while Jennings was ahead on the other (106-103).

Rivas, a 2008 Colombian Olympian, improved to 26-0, 18 KOs and obtained his first knockout after the sixth round. He successfully defended his NABF heavyweight title for the third time and with the victory, he collected Jennings’ IBF International and NABO heavyweight belts. With the most significant victory of his professional career, Rivas will undoubtedly set himself up for a significant bout later on in the year.

This was a devastating loss for Jennings, who was favored in this bout against an unproven opponent and ranked in the top fifteen by all four major sanctioning bodies. He dropped to 24-3, 14 KOs and had his five bout winning streak stopped. It also stalled his attempt to obtain another world title bout.

In the co-feature, featherweight sensation, Shakur Stevenson, who is one of boxing’s most promising prospects, dominated Jessie Cris Rosales and then stopped him in the fourth round. He connected on a massive straight left that knocked Rosales down. Rosales beat the ten-count, however, he was extremely dazed and on unsteady footing, so referee, Charlie Fitch stopped the one-sided bout at one minute and twenty-nine seconds in the round.

The unbeaten southpaw dominated each round as he landed pretty much whatever he threw. Stevenson consistently connected with hard straight left jabs and uppercuts. He also effectively worked Rosales’ body. Stevenson demonstrated tremendous defense that prevented Rosales from landing more than a few punches each round.

The 2016 United States Olympic silver medalist, who is only twenty-one-years-old, improved to 10-0, 6 KOs and in the process, won the vacant IBF Intercontinental and WBC Continental Americas featherweight titles. After the fight, Stevenson said that he wanted to fight undefeated IBF featherweight world champion, Josh Warrington next.

Rosales fought hard but was simply overmatched in this bout. He fell to 22-2-1, 10 KOs and lost for the second time in his last three bouts.