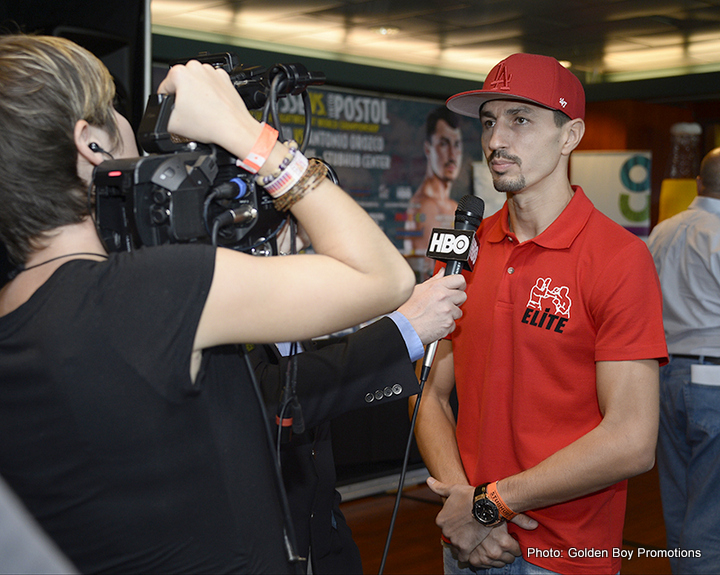 Since you’ve been working with Freddie, what’s been the biggest improvement in your game?

You have mentioned that Matthysse is better than Crawford. Can you tell us why?

Freddie, have you done anything with Postol for these last three fights that would increase his power?

FREDDIE ROACH: These last three training camps the opponents were different and we take into consideration what the other fighter brings to the table also. For Crawford we have had to get ready for lefty and orthodox styles of fighting also, and bring in the right sparring partners at the right time and work on him fighting as a southpaw and fighting as a righty so there is nothing that Crawford is going to surprise us with. We have seen a lot of tape on him. He is a good young fighter but I think we are a far better fighter because our two knockout wins in the last three fights are against far better fighters and I think Crawford is still being built up.

Yesterday, Crawford spoke of Postol’s holding tactics and using elbows and said he would speak to referee Tony Weeks about it. What is your response?

VIKTOR POSTOL: I think with the experience and the respect level of Weeks and the level of fights that he has been in I think that Tony Weeks will know what is legal and what is not legal and he will make sure that no illegal activity happens and I think he is a professional and I don’t think he needs to be told what has to be done.

FREDDIE ROACH: Pretty much I agree that Tony Weeks is one of the best referees in the world and he will call the fight as he sees it and all we are asking for is a fair shake from the referees and judges in this fight.

FREDDIE ROACH: We pretty much prepare for everything. I study a lot of tape and I watch for a lot of his mistakes and his habits and so forth and things we can take advantage of and we work on that very hard and that’s why Viktor is 100% ready for the fight.

Yesterday Crawford spoke about how he thinks the fight will go – he said he can brawl or trade or box. How do you feel it will go? What is your prediction?

What type of a fight would favor Viktor?

FREDDIE ROACH: You know, Viktor has a height advantage and a little bit of a reach advantage. He sets things up real well with his left hand. He is a complete fighter. He trains really hard. He comes here to be with me for eight weeks at a time. We get along really well and we work really well together. He boxed the other day and he is peaking and he’s ready for the fight and he is in great shape. I think this is a good opportunity and I think Crawford is underestimating us a little bit but he’s going to pay for that.

Do you think that the Crawford fight will be easier than the Matthysse fight?

VIKTOR POSTOL: No, not at all. Every fight is different. Matthysse and Crawford are two different style fighters. I never expect any fight to be easy and no one fights the same. Everybody is difficult.

There is talk about the winner of this fight getting a Pacquiao fight. Is this something you would be interested in or no because he is a stable-mate?

VIKTOR POSTOL: As far as the trainer…we have a team and we would sit down with Freddie and decide how we can make this fight happen.

CARL MORETTI: Yes I think there is a possibility depending on how this fight goes and who the winner is. Why not add him to the Pacquiao sweepstakes? Being that he would be declared champion by two sanctioning bodies at 140, it would have to be decided if Manny is going to fight at 140 when he returns or stay at 147. I would love to see Freddie Roach run back and forth to different corners – that would be great. Now he runs around Wild Card without knowing where he is going – this would be even better. He runs upstairs and downstairs at Wild Card – why can’t he run back and forth to different corners?

VIKTOR POSTOL: Definitely I hope so and I want to do everything in this fight that would take me towards that goal. I want to make this an exciting fight.

CARL MORETTI: Obviously, a win over Crawford would raise his profile tremendously. Becoming a pay-per-view star at this point I think is a lot to reach for because pay-per-view is really based on match-ups and how much the public grasps onto you. I think if you are Viktor, you would want to unify the titles or fight the best challenge out there. Clearly the winner is going to have a bright future if the fight is what it expects to be and I think the loser is in the playoffs for anyone as well. A lot of questions will be answered on the 23rd but not about being pay-per-view stars yet. It is the match-ups that matter and this is the best match-up at 140. Maybe it is a rematch if it is that good of a fight but you don’t know yet.

What is the feeling of the Russians and Ukrainians when they come to fight in the US?

VIKTOR POSTOL: There are a lot of great fighters now from Europe that are creating a lot of buzz in the United States, which is the Mecca of the world of boxing. Here is where you have to make things happen and I am happy for them and it is great the this country is giving them and myself an opportunity and it’s great that the boxers are performing at a level that they are performing at.

FREDDIE ROACH: You know Terence Crawford and the University of Nebraska have one thing in common. Nebraska is in the Big 10 and on the 23rd; Crawford is going to get the Big 10-count from the referee. (Written in Nebraska Red per Freddie’s instructions)

Freddie, if Postol were to win and did want to fight Pacquiao, how difficult would it be for you?

FREDDIE ROACH: It wouldn’t be the worst position in the world because I feel that Viktor has done everything to get ready for this fight. I think we have the right style and the right opponent. And if that does happen I will have to deal with it. Going to the Philippines for a long time or staying here. It could happen but it would put me in a pretty good place either way because I really like working with both fighters – they both have a great work ethic and I look forward to that predicament.

But there would be no way you would train against Manny right?

FREDDIE ROACH: Yes, Manny and I have been together for fifteen years and it would be very difficult to go against him of course, but you know Viktor is a very good fighter also and I’m not sure if Marvin [Somodio] would be his chief cornerman or not – but Marvin being a Filipino maybe not, we’ll see (laughing).

How has Postol progressed since your first training camp – in Philippines when Manny was preparing for Algieri – had he sparred with Manny?

FREDDIE ROACH: He sparred with Manny and he gave us great work and it was very competitive and he really got Manny ready for that fight. It was a great training camp but that was a little while ago and everyone is getting a little older and a little bit more mature and he is definitely a tough fight for anyone in the world. When he and Manny sparred together there was great action there.

Was there much consideration to put this fight in Omaha? Viktor has fought everywhere. Is Terence done with Omaha?

CARL MORETTI: No, I don’t think Terence is done with Omaha. There was some concern from the Postol side not to go into the backyard of Terence Crawford. Secondly, when you are doing a pay-per-view event, you want to try and stay in a major market, whether it is New York, Las Vegas or Los Angeles that are used to pay-per-view events. So the combination of both sort of led us to Las Vegas. From a Crawford point of view we know that he is the best fighter out of Omaha and we know what he can do in Omaha, that’s why we brought him to New York and we wanted to do a fight on the west coast to expose him to more people out there — broaden his fan and media base — and when you are talking west coast you are talking Las Vegas and Los Angeles. So for a combination of those reasons, that’s how we ended up in Las Vegas. I do think Terence will fight in Omaha again – he will never abandon Omaha.

FREDDIE ROACH: I would like to wish everyone good luck and I can’t wait to get this one started.

VIKTOR POSTOL: Thank you to all of the fans that support me and I am waiting for everyone to come on July 23rd to watch the fight. And if you can’t make it to Las Vegas, watch it live on pay-per-view.