Vergil Ortiz Jr passed his test against Maurice ‘Mighty Mo’ Hooker last Saturday night, stopping him in the seventh round in a grueling contest from start to finish on DAZN, and now he wants to take on the top dog, Terence Crawford, for his WBO welterweight title.

When it comes to taking on the best, Ortiz (17-0, 17 KOs) has an old-school warrior attitude, wanting to fight the top guys regardless if he’s not ready for that step.

Power-wise, the 22-year-old Ortiz showed that he’s more than ready to take on the unbeaten Crawford (37-0, 28 KOs) with the way he broke down Hooker (27-2-3, 18 KOs) to score a 7th round stoppage last Saturday night at the Dickies Arena in Fort Worth, Texas.

Hooker, 31, took a knee in the seventh after exchanging bombs with Vergil. Although Hooker said his hand was the reason why he quit, it looked more like a case of him having absorbed too much punishment from Ortiz.

Hooker deserves credit for making it to the 7th round, as he looked like he was ready to go in the fifth after being hurt by a body shot from Vergil.

To make it to the seventh was an achievement for Mighty Mo that view fighters have been able to do lately with Ortiz. 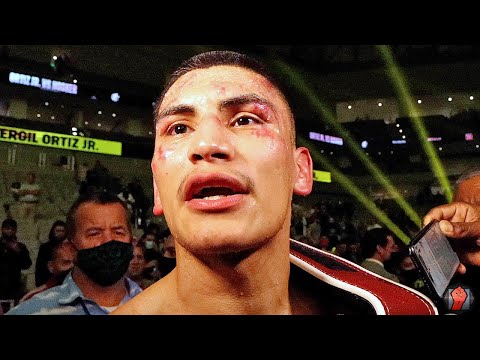 “It definitely gives me more confidence,” Ortiz said after the fight in reflecting on his win over Maurice. “I believe in myself more that I’m ready for a title shot, whoever is willing to give me an opportunity.”

Both Crawford and IBF/WBC 147-lb champion Errol Spence Jr were in the crowd for the fight, but Vergil only had his sights set on Terence. Ortiz is ranked #2 with the World Boxing Organization and in the perfect position to challenge Crawford for his 147-lb title if he’s game.

If not, it’ll be interesting to see exactly who Crawford winds up facing. It sure as heck WON’T be Spence. We know that because Crawford ruled out a fight with Errol last Saturday night, saying he’s “history”.

If Vergil gets that fight with Crawford, he needs to be a little more mindful about keeping his guard up when going on the attack. Ortiz can’t let Crawford land the same type of shots that Hooker was hitting him with all night.

THE FUTURE HAS ARRIVED. ✨ pic.twitter.com/tKa7ia0ZBY

There’s nothing wrong with Vergil’s punching power and his seek & destroy style of fighting. He’s got the power to knockout Crawford.

Top Rank promoter Bob Arum needs to set up a fight for Crawford soon, as he’s been out of the ring since last November.

It’s becoming increasingly apparent that he’s not going to get the fight that Arum has been talking about with Manny Pacquiao since Crawford has already written off Spence, which leaves very few options for him.

Yeah, Shawn Porter is interested in facing Crawford, but that would be a high price tag that would go along with him getting the fight, and it’s not likely boxing fans would be willing to purchase a Crawford vs. Porter match in high numbers. It’s not a great match-up for PPV.