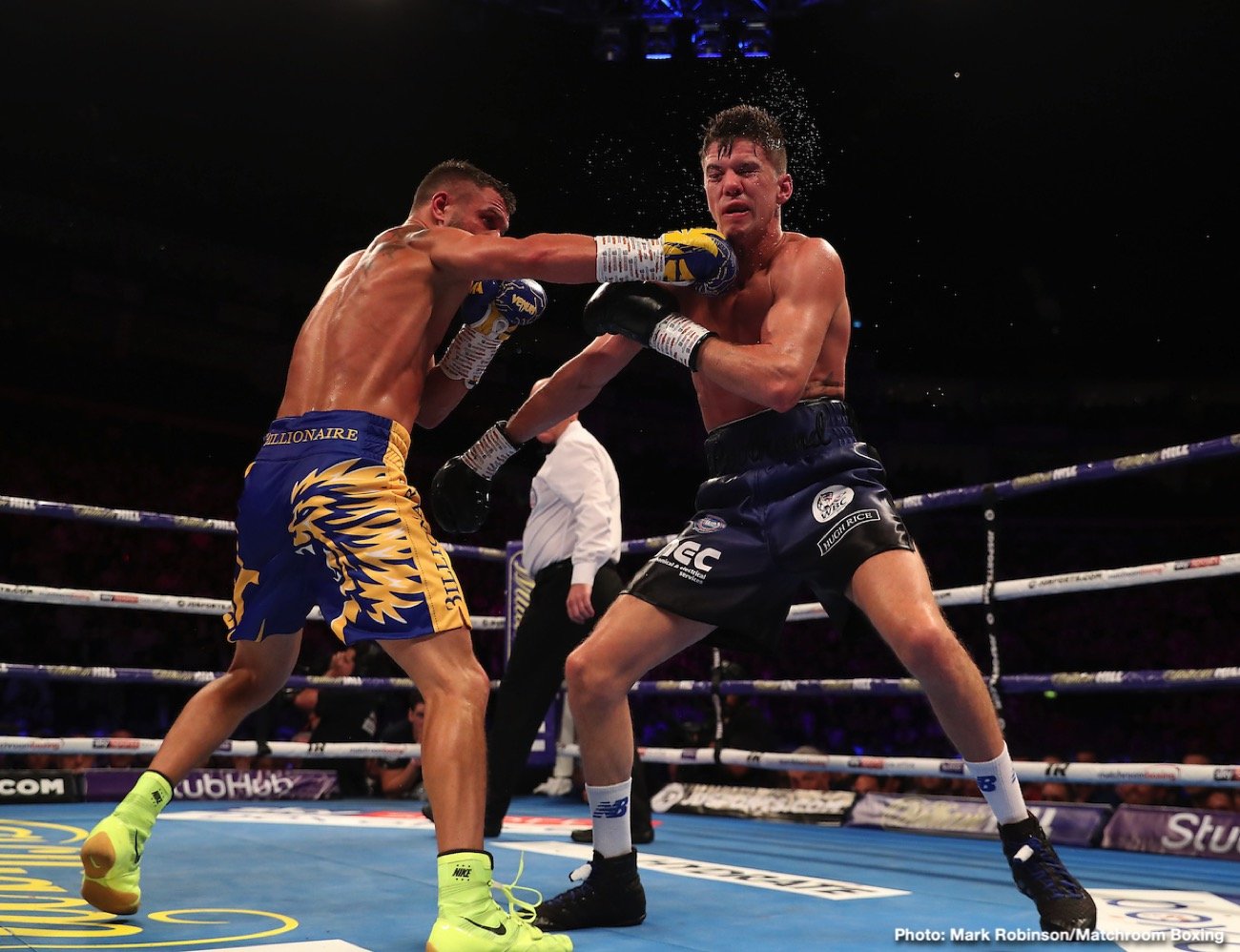 Vasiliy Lomachenko (14-1, 10 KOs) won the vacant WBC lightweight title on Saturday night with a 12 round unanimous decision over Luke Campbell (20-3, 16 KOs) on ESPN+ at the O2 Arena in London, England.

Lomachenko, 31, came into the fight as the WBA/WBO 135-lb champion, and he had to battle hard to beat the highly motivated Campbell to add the WBC belt to his collection. That’s the title that Lomachenko so badly coveted.

The fight was closer than the scores

The scores were 119-108, 119-108, and 118-109. Campbell fought a lot better than the scores handed down by the judges. Campbell fought well enough to have won 4 to 5 rounds. It was the dominating performance by the 31-year-old Lomachenko that the judges’ scores would have you believe.

In the first half of the fight, Campbell fought Lomachenko on even terms.  Campbell surprised Lomachenko in round 7 in hurting him with a big shot. This kind of woke up the sleepy-eyed Lomachenko, who came back to land some nice shots on Campbell. In round 11, Lomachenko knocked Campbell down with a nice punch. Campbell was saved by the bell.

Lomachenko closed the show in a strong fashion in hurting Campbell in the 12th round when he when on the attack. The increased pace that Lomachenko put on Campbell had him reeling in that round. Campbell had already topped out, and he didn’t have the energy stores needed for him to deal with the surge from Lomachenko. Nevertheless, Campbell finished the fight on his feet, and he gave Lomachenlo a run for his money in that fight.

This was a battle of Olympic gold medalists, and it was clearly one of the hardest fights of Lomachenko’s career by a long shot. The only other fight that may have been rougher for Lomachenko was in his loss to Orlando Salido in 2014. If this version of Campbell had fought Lomachenko back then, he’d have likely beaten him if he’d focused on throwing body shots the way Salido did.

Next up for Lomachenko could be to fight for the IBF lightweight title against either Teofimo Lopez or Richard Commey. Those two will be facing each other next. Lopez is the mandatory for IBF champion Commey.

“Obviously, we’re looking to win the fourth belt to unify the title. But Loma and Egis [Klimas] have told me they can’t wait to come back to the UK to fight here again,” said Top Rank Boxing promoter Bob Arum about Lomachenko. “The English fight fans are the best fans in the world. Luke Campbell didn’t disgrace himself. He fought a hell of a fight. He’s a hell of a fighter. Big, big heart, and Luke will be back.”

Arum obviously knows that there’s more opportunities for Lomachenko back in the UK, and he doesn’t want to close the door for fights over there. Lomachenko won’t attract the same big crowd or the amount of attention fighting the winner of the Teofimo vs. Commey fight. That’s not going to be a big seller. The huge fights for Lomachenko are against these guys:

If Lomachenko does return to the UK, it’ll have to be against someone like Josh Warrington or Josh Taylor. Warrington fights 126, and he would need to come up in weight to at least 130 to face Lomachenko. Taylor, 5’11”, might be too big and too strong for Lomachenko. With the way Lomachenko struggled to beat 5’9″ Campbell, Taylor would tower over him, and have too much power.

Crowd favorite, Hughie Fury (23-3, 13 KOs) gave a good effort but wound up losing to former WBA heavyweight champion Alexander Povetkin (35-2, 24 KOs) by a 12 round unanimous decision in the co-feature bout on the card. Hughie fought extremely well in rounds 1 through 6, but he steadily faded in the last part of the fight, and gave the match away to the more aggressive Povetkin.

Towards the end of the fight, the 39-year-old Povetkin resembled the younger guy against the 24-year-old Hughie. Povetkin had the better engine of the two, and he was willing to mix it up in throwing meaningful punches. Fury was mostly jabbing, moving around the ring, and holding. The referee didn’t address the issue with Hughie’s clinching, but he should have. Fury fought like he was trying to survive rather than win the fight. It’s unclear whether he didn’t have the stamina or the courage to stand and fight. Whatever it was, it kept him from winning.

Hughie’s trainer needs to maybe think about dropping Fury back down to 8 round fights, because he doesn’t have the stamina to fight hard for 12 rounds. There’s a very good chance that Hughie will never improve in the stamina department no matter what Peter Fury tries to do to help him in this are. The loss for Hughie is his third. All three losses have come when Hughie has stepped it up against elite level fighters.