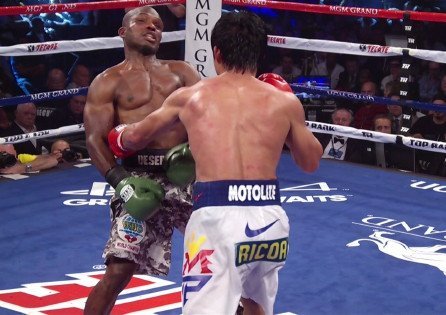 The concluding result of Saturday’s bout in Las Vegas is not foreign to me or my pre-fight forecast. I do not even have the luxury of ownership of this prediction because many of us considered this outcome with a higher probability relative to some of their other outcomes. However, the manner in which the bout transpired was not anything I could have reasonably predicted.

At times I found myself weaving and throwing double hooks in the air having been drawn into the fire fight which was taking place in front of me yet many miles away. Who would have known that the pursuit of validation would inspire the storm we witnessed. Questions have been asked and on Saturday answers found.

I can safely assume that none of you folk would have foreseen the explosive rumble we saw take place. We all know how Manny approaches his fights and seeks to bring devastation to all those who venture into the ring with him. His exploits have threaded fear into the fibre of many who have doubted his abilities or sought to reduce his accomplishments.

Someone forgot to give Timothy Bradley the script; he seemingly reduced fear to some insignificant form and transformed it into aggression. As if he forgot the lessons he extracted from his bout with Ruslan Provodnikov he engaged with fearless aggression.

Round 1. was a fairly close round; one thing notable was that Manny seemed more cautious in his approach. Although measured, Timothy Bradley adopted an aggressive start. He made Manny miss and rewarded him with some body shots. Timothy Bradley punctuated the round with a flurry at the end. It was a Bradley round.

Round 2. Manny started the round with his traditional forward momentum. Bradley continued to make him miss as he moved out of harm’s way. Manny’s flurries connected and caught Bradley’s attention as he struggled to land reply to a man who effortlessly darted away. Not to be outdone Bradley threw some combination of his own. He was simply not willing to back down to any aggression Manny served. They engaged in a fire fight as they traded powerful blows. Bradley was seemingly a possessed buffalo seeking to spear any who stung him, with immediate effect. I gave it to Pacquiao.

Round Three saw Manny stalking Bradley around the ring and he landed some telling blows. To his credit Bradley remained aggressive and exploited the clinches to deliver subtle body shots. I was surprised at Bradley’s energy as he attempted to wear Manny down on the ropes and get off some combinations. With a minute to go, they traded at every opportunity. I give this one to Manny, he got tagged a few times but delivered the far superior punches.

Round Four Saw measured activity from both fighters but they landed some crushing blows. With a minute left Bradley launched two over hand rights while pivoting and one temporary lifted Manny off the canvas. It certainly appeared that Bradley has adapted his style to make good on the promise to knock Manny out. Bradley was unfazed by all that was thrown at him hunting Manny down and fired loaded shots to both the body and head. It was Bradley round.

Round Five, Bradley seemed intent on making Manny fight at a great intensity while they threw each other fire bombs. Timothy Bradley’s over hand right and left hooks matched Manny flurries in their effectiveness. It was a quieter round, but the more effective shots were fired by Manny.

Round Six, Bradley walked Manny down and punished him at every opportune moment. Pacquiao enjoyed a little success with some clean shots. In close quarters Bradley loaded his punches with galvanizing power. In the dying seconds, Manny threw wicked combinations which Bradley seemingly made him miss. Floating on elevated confidence Bradley invited Manny to trade blows with him. Bradley seemed not to have any respect for Manny’s power that night. This was a Bradley round.

Round Seven Saw a similar start as Bradley looked to do damage, Manny was unable to put this man on the back foot. Bradley was all about body shots that round while Manny’s darting onslaught managed to score one –twos. Bradley cast bravado in attempts to draw Manny into a slugfest intent on testing Manny’s chin. I gave the round to Manny.

Round 8 Bradley activity levels are shot. Manny was more effective and picked up momentum. Something seemed to have cracked for Bradley who has slowed down.

Rounds 9 and 10. These rounds were all Manny. He controlled the action firing his flame throwers upon an energy sapped Timothy Bradley. That was Manny round.

Round 11: What the hell had become of Timothy Bradley feverish momentum? He seemed content to box off the back foot which afforded him scoring opportunities. Manny stalked Bradley as he sought opportunities to unload a barrage. Bradley returned to his boxing and scored the more effective punches. That was his round.

Round 12: It was a slow start to this round nothing notable had been thrown in the early stages. Manny was still in control nothing specular but he was still scoring. With thirty second left Bradley engaged in his last flurry.
There was no dispute about who the winner was. Congrats to Manny Pacquiao.

This was an exciting bout, there were times in this bout where I begun to worry about Manny’s ability to sustain the torrent of the punishing over hand rights and hooks Bradley threw. I had expected Bradley to box Manny coupled with occasional aggressive flurries. Bradley’s approach to this bout was the element of surprise to me, who would have thought he would come out even harder than when he fought Ruslan. I was impressed by his efforts and tenacity; however we are aware that the feverish pace sapped all his energy. I have a great deal of respect for Manny Pacquiao and his contributions to our sport. He deserved the win and was able to close the chapter on the ill-found 2012 decision which saw him robbed.

There were several instances in this bout which drew my concern about Manny especially in the face of Bradley’s unrelenting pursuit. Manny looked notable less dynamic than what we have become acquainted with in recent years. One could argue that it was the nature of their style which caused the observation but I do not believe that to be the case. With due humility I would advise Manny to fight another two times at most and call it day. He has done well and his abilities even today and not unquestionable but I saw father time calling upon Manny’s from the middle row. I would of course like him to fight Mayweather. However given what I have noted I am uncertain as to whether a fight with Mayweather still holds the merit it did some five years. Manny is an incredible fighter, he has fought the best out there and achieved in all his pursuits, however a fight with Mayweather now would be even more dangerous than before. I give praise to both Manny Pacquiao and Timothy Bradley who gave us an exciting performance, may their journey yield fruitful harvest.