Tonight at Wembley, Tyson Fury landed a peach of a right uppercut to the exposed chin of Dillian Whyte and he ruined his game challenger. Whyte, who never saw the punch coming, went down on his back, he showed sheer heart and instinct in getting back up before the ref hit ten, but Whyte was gone and the third man had no choice but to end it. Time was 2:59 of the sixth round. Fury is now 32-0-1(23). Whyte, who was undone by an uppercut in his losses to Anthony Joshua and Alexander Povetkin, falls to 28-3(19).

It was a messy fight at times, with Whyte, so much slower, on his feet in particular, unable to close the gap and get to Fury. Whyte, who surprisingly came out as a southpaw, was wild with his swings, missing by the proverbial country mile. While when Whyte did manage to get Fury on the ropes, he was dangerous with his elbows and in the fourth round the two clashed heads, with Whyte picking up a small cut at the side of his right eye. For a while, it looked like the referee might lose control of the fight. 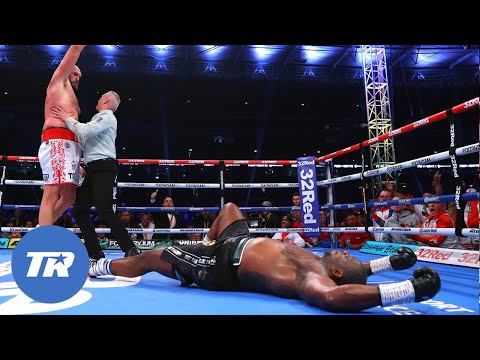 Fury, aside from when he got angry at Whyte’s rough stuff, was in control at all times, his reach and fast hands dominating things. Fury did box as a southpaw himself briefly, this in the second round, and he talked to Whyte at times. Whyte had to ship some hefty body shots in the 5th, and the challenger was as wild as can be once again in the 6th. Then, with the end of the round approaching, Fury uncorked that sizzling right uppercut. Whyte was pole-axed and it was all over.

So what next? Fury, asked again if he really will retire, said he had promised his wife he would retire after the Deontay Wilder trilogy but that he was then offered a big fight at Wembley. “I owed it to the fans to take it,” Fury said. “I have to be a man of my word and I think this might be the final curtain. And what a way to go out!”

So who knows? It sounds as though Fury will actually call it a career, but who can say for sure? Fury is at his peak right now and he did away with a good, dangerous fighter with ease tonight. It seems Fury has at least four or five additional great performances in him yet. 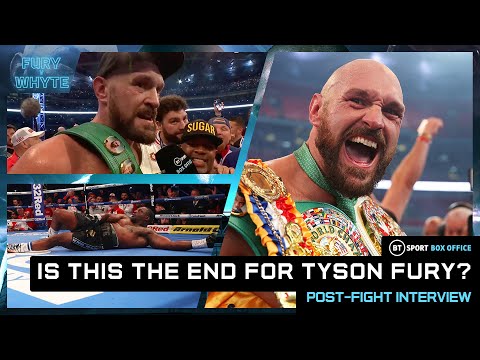