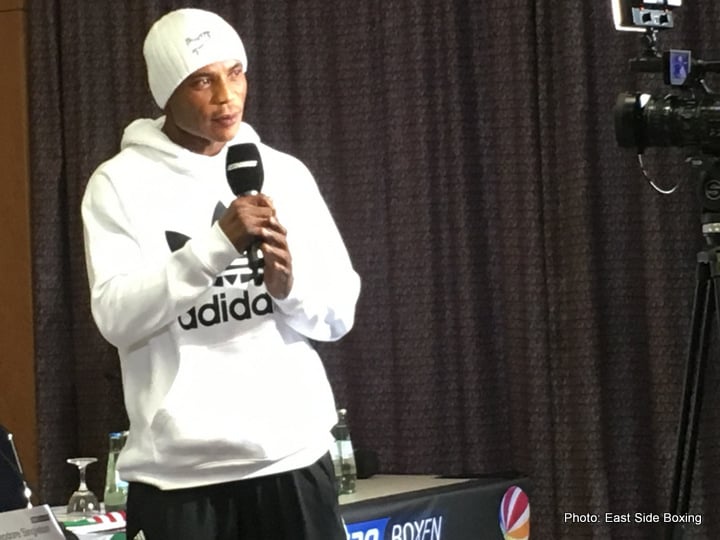 49-46, 48-47 and 49-47 the judges scorecards read unanimously in favour of the German when the fight was stopped in round 5 due to the inability of Zeuge to continue because of an accidental headbutt he suffered in round 3. But many especially Ekpo and his fans have never accepted the verdict upon which the WBA promptly ordered a rematch.

Now the Nigerian Boxing Board of Control (NBBoC) led by its Secretary General, Remi Aboderin have been in contact with the Sports Minister of Nigeria to try and bring the rematch to the West African country which must take place before the end of the year per WBA stipulation.

Don King Promotions and Sauerland Promotions have been ordered by the WBA headed by Gilberto Mendoza to reach an agreement by August 17 or the fight goes to purse bid and that is where the people of Nigeria hope to play the trumpcard.

Ekpo and his manager, Anthony Kermah of Ghana-based Landmark Promotions are working assiduously to land some influential Nigerian business moguls as well as corporate Nigeria to also come on board and support the government stage what could probably be the biggest sporting event ever in Lagos should they win the bid.

Tyron Zeuge who is promoted by Sauerland Promotions will have a big hurdle to clear since the Nigerian government are intent on bringing the rematch to Lagos. Ekpo’s case is also aided by his promoter, the legendary Don King who famously staged the historic ‘Rumble in the Jungle’ world heavyweight fight between Muhammad Ali and George Foreman in Kinshasa, Zaire in Africa way back in 1974, its possible the Nigerians can win the bid for the fight to take place in their country to mark their independence day on October 1st.

Don King Promotions are already looking to replicate a modern version of ‘Rumble in the Jungle’ in Nigeria with the support of Nigeria government should they win the bid.

In which case, Zeuge will be used as a sacrificial lamb by Ekpo in his quest to finally realise the childhood dream to be a world champion, right in front of his own people.