Daniel Dubois (18-1, 17 KOs) ended the two-year reign of WBA secondary heavyweight champion Trevor Bryan (22-1, 15 KOs), stopping him in the fourth round on Saturday night at the Casino Miami Jai-Alai.

In the fourth round, the 24-year-old Dubois poleaxed the flabby-looking 32-year-old Bryant, sending him down face-first like a heavy tree. The time of the stoppage was 1:58 of the fourth.

With the victory, Dubois is now the WBA ‘regular’ heavyweight champion. Hopefully, he can use the belt to eventually fight the main WBA champion Oleksandr Usyk, when the World Boxing Association consolidates the titles at heavyweight.

Super middleweight prospect Luis Rodriguez (9-0, 9 KOs) destroyed Ryan Adams (8-6-1, 6 KOs) by a third-round knockout. Rodriguez dropped Adams twice to get the stoppage. The contest was halted at 2:26 of the third.

Undefeated light-welterweight prospect Raynel Mederos (7-0, 1 KO) destroyed Ryan Wilson (1-1, 1 KO) by a second-round knockout. Maderos knocked Wilson down twice, prompting the referee to halt the contest at 1:20 of round two.

Welterweight Tre-Sean Wiggins (14-5-3, 8 KOs) smashed Travis Castellon (17-5-1, 12KOs), blasting him out in the first round of a total mismatch. Wiggins dropped Castellon several times before the bout was halted at 2:07 of the round. 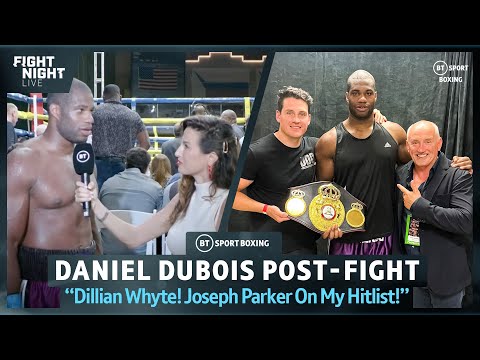 Despite the 32-year-old Bryan being a heavyweight champion from the U.S, he’s not well known to American boxing fans. If he pulls off an upset tonight against Dubois, it should help his popularity.

“The first time he got some real opposition, he got on his knees like a little girl. He quit,” said Trevor Bryan to BT Sport Boxing, talking about Daniel Dubois’ loss to Joe Joyce in 2020.

“I keep telling people that I’m a real heavyweight champion and a real fighter,” said Bryan. “Before I quit, I’m going to be knocked out on my shield, and that’s how you’re supposed to go in this sport. No other way.

“We don’t wave no white flag. We don’t wave flags around here. You’ve got to knock me out to take what’s mine, and that’s exactly what he came to do. He came all the way across the pond. I commend him for that. I’m going to treat him like a hostile enemy.

“All heavyweights can punch, but what can you do when somebody takes away your best punch? It’s going to be a long night. I have all of that. I have all the skills to make it a long night for the boy, and he’s going to see why he’s in there with a top-level champion.

“A lot of people talk a lot of stuff about Trevor Bryan. ‘He looks like this and he looks like that,’ but the one thing I never heard them talk about was my skills.

“Guess what, guys? I came in shape for this one, and I’m going to show you guys what’s going down,” said Bryan.

Trevor Bryan (22-0, 15 KO) will be making his second defense of his WBA ‘regular’ heavyweight title against #1 Daniel Dubois (17-1, 16 KO) tonight at the Casino Miami Jai Alai, Miami. The card will be shown live on FITE on pay-per-view.