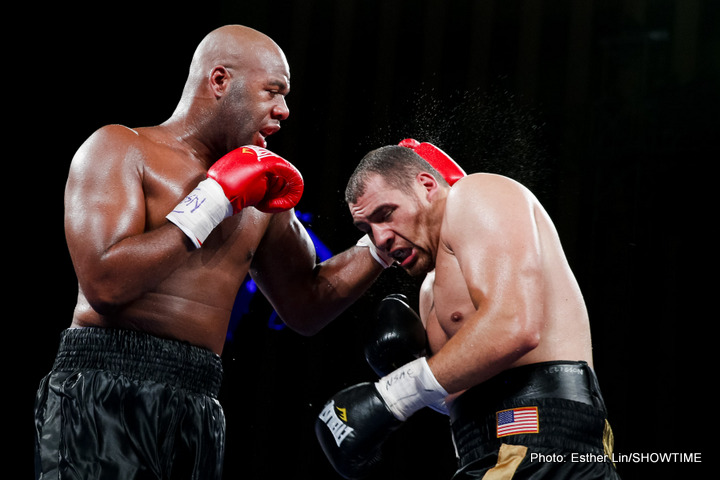 Unbeaten heavyweight Trevor Bryan, who won some sort of version of the WBA heavyweight title with an October 2018 stoppage win over cruiserweight B.J Flores, has been inactive since. While his promoter, the “Only In America Man” has also been inactive, semi-retired as of late. Both will return on September 26th.

It’s been reported by Boxing Junkie and TMZ Sports how King will promote a fight between Bryan, 20-0(14) and Lovejoy, 19-0(19) in an attempt to “bring boxing back into the living rooms.” The fight (no venue yet announced) will go out live on the Impact Network (currently in 88 million homes) and King is excited about it.

“I’m bringing some life back into the business again for the love of the people,” 88 year old King told Boxing Junkie. “I’m bringing back a heavyweight title fight, giving the people what they want. The country is divided. I want to show that working together works. I dedicate this fight to coming together.”

So what kind of a fight can we expect? It’s tough to say, really. Bryan is tall, athletic and he is unbeaten. But the 30 year old (31 in August) has been hopelessly inactive and, to top it off, the Flores fight aside, Bryan hasn’t fought anyone of note. Lovejoy’s credentials are even less solid. The big guy (6’5,” an inch taller than Bryan) has won 19 in a row all by KO but the 36 year old has fought one, that’s right ONE, fighter who had a winning record at the time.

Lovejoy can punch, at least at a certain level, and he has been more active than Bryan, having won a fight this January. But how Lovejoy has got himself any kind of “world” title shot is truly a mystery. Who knows, we might see a good action fight on September 26, with both guys unloading bombs, but no fan in his or her right mind will call the winner a heavyweight champion.

Still, King is doing a great job of hyping the fight.

“It’s an irresistible force versus an immovable object,” King said of the upcoming fight. King added how the winner could face Manuel Charr (yet another claimant of a version of the WBA heavyweight title).