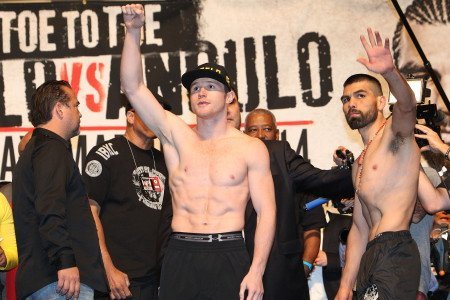 (Photo credit: Esther Lin/Showtime) Every warrior in life is met with a moment that questions his character and outweighs his optimism. What separates those who “are” from those who “were” is the sheer ability to rise when the only other option is to fall. Comes as no surprise that the hottest attraction in the sport this weekend plays host to the Las Vegas desert. And it should also come as no surprise that at the center of it all are two proud Mexican warriors that never say die! As we get closer to this “Fight of the Year” candidate, we hone in on “Keys to Victory”, “Four to Explore”, and an “Official Prediction”:

For Canelo, keys to victory all hinge on conditioning, a solid jab, and a sharpened ring intelligence to regulate each. Erislandy Lara is arguably the most physically gifted fighter at 154lbs not named Floyd Mayweather. What made Angulo effective against him was realizing that in order to be out-boxed, you have to attempt to box. Intelligently, he opted not to fall into that trap, instead choosing to smother and outwork him. Although Lara had his moments, the knockdowns cemented Angulo’s efforts and placed him ahead on the cards late.

Why is that important? Consider this: Against Mayweather, Canelo threw 526 punches. Against a busier opponent (Trout) who threw 726 shots in his direction, Canelo was unable to sustain that pace, throwing only 431 in return. Against a very active Lara, Angulo managed to get off 704 punches, and that was only 10rds. If Canelo can’t keep up, the power and workrate of Angulo could break him in the end.

For Angulo, keys to victory will require him to go deeper into the playbook than we’ve seen in the past. For a great fraction of his career, a heart that doesn’t stop beating and a raging spirit that keeps the opponent fleeting has been his claim to fame. As great as those qualities are, on the elite level it takes more. Canelo is clearly the better pure boxer of the two, so in order to stay a step ahead or at the very least keep up, Angulo will need to use great intelligence to mix his shot selection and refrain from becoming predictable.

Canelo has never been tested to the body at great length. Angulo will benefit greatly from dedicating himself to the ‘rib-shack’, and being prepared to seize the moment when Canelo finally drops his hands (like we’re accustomed to seeing him do). A consistently busy workrate, dedication to the body, and a diverse attack could be precisely what the doctor ordered for Angulo on this big stage. Both men enter coming off losses, but Angulo is the only one of the two with nothing to lose. That means one thing in the end: DANGER!

‘Perception or Reality?’: Saul Alvarez is the leader in the sports famed compubox plus/minus ratio (behind Floyd Mayweather); yet fundamentally, Erislandy Lara is far more skilled. While Canelo’s opponents have enjoyed a decent landing percentage against him, in comparison, over his last 5 bouts, Lara’s opponents averaged a low collective 20% of their punches against him. Angulo, on the other hand, falls very close to the bottom of that same compbox plus/minus list; yet he found a way to outdo all of Lara’s previous (5) opponents, landing a staggering 30% against him. If we believe the plus/minus ratio’s, statistically, Angulo doesn’t stand a chance. But based on the reality of what we’ve witnessed, he has a helluva chance! Should we honor the statistical perception? Or is the reality of what he’s been able to do in the past a better sign of what truly matters?

‘Leap or Faith?’: Against Austin Trout, Canelo weighed in at 153lbs, yet on fight night he tipped the scale unofficially at 173. A 20lb jump in 32 hours was quite a leap, yet his subsequent victory led most to believe it was a non-issue, restoring the faith. Stamina speculation seems to be fueled by this same topic (weight). What doesn’t help is that leading up to this showdown with Angulo, an under-the-radar deal was struck which allowed Canelo to tip the scales above the jr. middleweight level, at 155lbs. The Mexican warrior made several comments about “weight” during this fight camp, even going as far as saying his “greatest concern in every fight camp is making weight”. Considering this trend, is it a “leap” to believe that he can maintain such an active pace for 12rds? Or will fans of Canelo simply have to enter this bout with fear, relying solely on “faith”?

‘Primer Impacto’: The words “Primer Impacto” in Spanish mean “First Impact”. In the end, these two words could potentially tell the story of the night. When we look at the resume of Saul Alvarez in the jr. middleweight division, we see several names, yet inconspicuously absent from that roster is anyone with true pedigree or experience on the Jr. Middleweight level. Some would quickly spit the name “Trout”. A solid counter point is that despite his size, Trout has only one stoppage (over a journeyman) at the Jr. Middleweight level in the past 5 years. Canelo’s only stoppage over a legitimate Jr. Middleweight recently was also over a journeyman (Carlos Baldomir in 2010). Angulo brings natural middleweight power with a relentless approach. For Canelo, the operative question is “how will he handle this “first impact” against a TRUE jr. middleweight?

‘The Rose or The Thorn’?: When the bell rings tonight, star power is one thing, yet experience in both age and craft are another. At age 23, Canelo has 44 pro fights. At age 31, Angulo only has 25. Although those numbers may yield a few truths, the reality will arguably come down to which man is built to withstand the consequence of winning on this elite level. A rose attracts attention by “looking good” at all times, yet the cosmetic nature within allows them to wilt under pressure and intense heat. The thorn, however, is on point at all times, doing damage regardless of surrounding conditions. Canelo is the favorite, but such a status makes no difference. In the words of trainer Virgil Hunter: “with Mayweather he got an education; with Angulo, he will get a beating”! Is he the rose or the thorn? Tonight we find out. Stay tuned.

Tonight, there will be a bell to commence the action, but there won’t be one to end it, as two things are for certain: (1). We’re in for a “Fight of the Year” type night. (2). a ten count will end the night before the final bell comes. These two warriors will come and put it all on the line, and it’s hard to see either one on the losing end. As Angulo has pointed out all week long, “when the bell rings, there will only be two men with gloves on…..and those two men will have to settle this question once and for all”! From every angle, it appears to be a mismatch waiting to unfold. Speed, power, fame, all belong to Canelo. When we look at the betting lines in Vegas, apparently they belong to him too.

The tears for his little angel and a past riddled with tough times has led most to cast a sympathy vote for Angulo. Trouble is, those same tough times have molded him into a man who takes no shorts, no prisoners, and no handouts. Tonight will be no different. The judges won’t give him a sympathy vote, and Canelo won’t give him the victory, yet I have no question that he will come to take it! In many ways, for Canelo, this will be simply another night at the office. He’ll land his flurries and show his heart. But in the end, I have a very hard time seeing him flash his patented smile. In a very prophetic fashion, I boldly predict a revisit to Margarito-Cotto I, where the better boxer does everything asked of him…….except muster the strength to reach the final bell while standing. Skills pay the bills….but this will be a classic case where an iron-will conquers a still developing skill.

(Vivek “Vito” Wallace can be heard every Tuesday night on “Left-Hook Lounge Radio” at 9ET/6PT. He can also be reached at wallace@boxing247.com, Facebook, Twitter (@vivekwallace747) and Instagram (ViveksView).