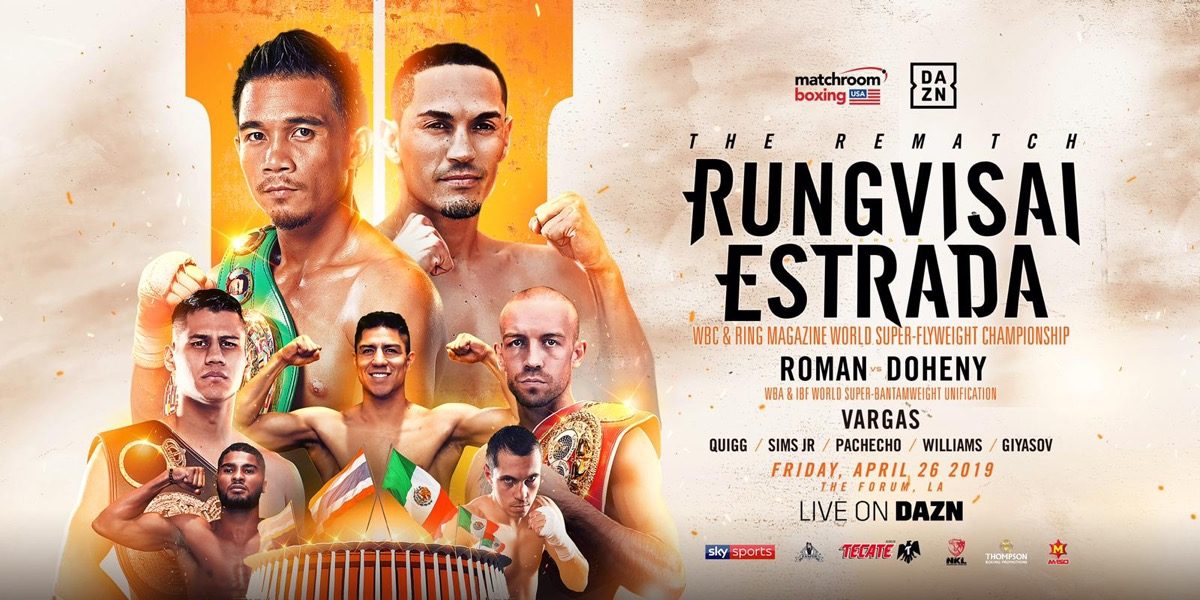 Srisaket Sor Rungvisai and Francisco Estrada rematch and Daniel Roman and TJ Doheny clash in a unification bout at The Forum in Los Angeles on Friday April 26 live on DAZN in the US and on Sky Sports in the UK – and tickets for the blockbuster fight night are on sale now! **TICKETS START FROM JUST $25 AND ARE ON SALE NOW FROM TICKETMASTER**

Rungvisai (47-4-1 41KOs) and Estrada (38-3 26KOs) served up a fight of the year candidate in February in the same LA venue – with Rungsivai edging it over Estrada by majority decision.

The Thai star will defend his WBC and Ring Magazine titles against the Mexican ace, with both men pocketing a pair of wins apiece since their epic tussle in California. Rungvisai was unable to make this week’s launch press conference in LA, but the challenger and former Flyweight World ruler believes that he will settle the score in another epic showdown.

“I’m extremely excited for this rematch,” said Estrada. “I know a lot of fans were asking for it. I’m getting ready to bring the title back to Mexico.

“I’m confident that I’m going to win the fight, but I’m also very excited to watch some of the undercard fights. I think it’s a stacked card, I like a lot of these fighters, so it will be a good card for everybody.”

WBA champion Roman (26-2-1 10KOs) made the first defense of his WBA crown in Japan over Ryo Matsumoto in February and followed that with another authoritative points triumph over Moises Flores in Frisco, Dallas in June, and then put the cherry on top of a fine year by stopping Brit challenger Gavin McDonnell in the tenth round of their clash on the first American boxing bill live on DAZN in October.

Like Roman, Doheny (21-0 15KOs) also went to the Far East for a massive fight, ripping the IBF crown from Ryosuke Iwasa in August in Tokyo. The Irishman’s first defense saw another Japanese look to take the title back to Japan, but Ryohei Takahashi was stopped by the 32 year old champion at Madison Square Garden in January.

“I’m excited to be back home,” said Roman. “This is a fight you want to see. The best against the best, champion against champion. I’ve been asking for this fight since I won the World title, and finally it’s here. It’s going to be a great card, but I feel we’re going to steal the show that night.”

“This is the kind of fight I want to be involved in,” said Doheny. “It’s a dream of mine – as soon as I got my World title that’s all I’ve been pushing for is a unification. I want to thank Daniel Roman for taking the fight and wanting to unify the division. In my opinion this is probably the best two 122 fighters in the world going off right now.

“There’s a lot of respect between myself and Danny, a fight of this magnitude does not need that kind of stuff. Come April 26 when that first bell goes, the respect will be gone out the window, and the fans can expect fireworks.”

A stacked undercard in support of the two World title battles is led by former two-weight World champion Jessie Vargas (28-2-2 10KOs) taking his first steps at 154lbs in his attempts to become a three-weight World ruler.

That will be Vargas’ first fight under new trainer Freddie Roach, and it’s a busy night for the Hall of Fame coach as Scott Quigg (35-2-2 26KOs) continues his charge to becoming a two-weight World champ.

Unbeaten Super-Middleweight talent Anthony Sims Jr is set for a breakout year and will fight for his first title on the bill. Sims (17-0 16 KOs), who is in action in Peterborough, England on Saturday night live on DAZN and Sky Sports, clocked three stoppage wins in the second half of 2018, and will look to convert that momentum in style in first the UK and then in LA.

Shakhram Giyasov (7-0 6KOs) and Diego Pacheco (2-0 1KO) landed wins in Tijuana, Mexico this weekend and will fight on the bill, while Eddie Hearn’s latest addition to his blossoming stable of young USA talents, Houston’s Austin ‘Ammo’ Williams, will make his pro debut on the card.

Tickets are on sale now prices from just $25 – to charge by phone with a major credit card, call Ticketmaster at (800) 745-3000. Tickets are also available for purchase at www.fabulousforum.com or www.ticketmaster.com, and also at the Forum Box Office.