Keith ‘One Time’ Thurman hopes to make a statement tonight in his comeback against Mario Barrios in Las Vegas.  The former WBA/WBC welterweight champion Thurman (29-1, 22 KOs) wants to remind the boxing public that he’s still one of the best fighters in the 147-lb division despite his 2 1/2 years out of the ring. The fight is taking place at the Michelob Ultra Arena in Las Vegas.

Given Thurman’s long layoff and how he’s badly aged, Barrios has a good shot at beating him tonight. Thurman doesn’t look 33.

His appearance is that of someone closer to 40, and someone that old is going to have problems against an active fighter like Barrios.

It doesn’t matter that Barrios has never fought at 147. He’s more than good enough to take advantage of Thurman’s age and inactivity, and perhaps send him into retirement.

It’s unknown how Thurman will react to losing against Barrios. All we know is that Thurman disappeared for 2  1/2 years after suffering his career defeat against 40-year-old Manny Pacquiao in 2019.

Thurman is encouraging fans to order his $74.95 comeback fight tonight on FOX Sports pay-per-view.  Thus far, fans have been largely negative about the idea of paying nearly $80 to watch Thurman fight a tune-up against the 26-year-old Barrios.

Fans think Thurman has ruined his career by him taking repeated layoffs of 2+ years in the last five years of his career, as he had the opportunity to replace Floyd Mayweather Jr. as the top star in the 147-lb division.

After his second long layoff since 2017, Thurman hopes to recapture the form that he had during his best years. To help the 33-year-old Thurman accomplish that goal, his management at PBC has matched him up against former WBA ‘regular’ light welterweight champion Barrios (26-1, 17 KOs).

The layoffs that Thurman has had have damaged his career badly, and it’s doubtful that he’ll be able to ever be the fighter that he was.

Thurman blames his layoffs on injury problems, but it’s difficult to believe that injuries are the reason for him being out of the ring for almost three years. You can argue that boxing no longer holds the interest of Thurman, so he’s chosen not to fight until now.

Thurman wants to showcase his skills

“I’m looking forward to throwing these hands once again, showcasing my skills and talent to the world, reminding them who Keith Thurman is as a welterweight, why I was ranked #1 at one point in my career,” said Thurman to TMZ Sports.

“I’m still one of the baddest and I’m looking forward to shaking up the division and letting people write up new articles, man. We need these new insights, and stop saying, ‘Where is Thurman?’ I’m right here, I’m not going nowhere,” Thurman said.

Barrios, 5’10”, towered over the 5’7″ Thurman went the two fighters stood for the face-off on Friday at the weigh-in. He looked much bigger than Thurman, and not surprisingly a lot younger. Barrios weighed in at 146.5 to Thurman’s 145.5 lbs.

Interestingly, Barrios looked at least ten pounds heavier than Thurman, which is a result of his upper body size.

Other weights for tonight’s card:

“They’re trying,” Thurman said when asked if he feels like boxing fans have forgotten about him due to his long 2 1/2 year layoff. “It’s one of those things where when you fall from glory.

“When you’re no longer truly a champion, they’re like, ‘Does he really need to be recognized?’ Yeah, I’m 33-years-old and one of the baddest that the world has ever created in the sport of boxing today.

“It’s not a hype game. I’ve been boxing since I was seven years old, and I’m 33 today. That’s 26 years in the game. I’ve put my heart and my soul into this sport.

“I’m a student of the game, I know the sweet science, and like we’ve been saying, there ain’t no better test than the Keith Thurman test. Just so you know, that’s Southern English, that’s no improper English, right?

Keith haunted by loss to Pacquiao

“There ain’t no better test than the Keith Thurman test. Everybody knows that I’ve been talking this for a minute. Whoever they put in the ring with me, they’re going to get some revenge punches. They’re going to get hit with a few shots that I wished I hit [Manny]Pacquiao with. Do you know what I’m saying?

“We’re stepping in with some revenge punches and Pacquiao is retired. So I’m not ever going to get those punches in. I wish I had pushed it a little more, but it’s all said and done.

“There’s so much to learn. I have that experience. It was monumental in my career. I just didn’t get the outcome that I wanted. So everybody else can get these revenge punches. I mean, I’m going to find my satisfaction in beating up somebody.

“I don’t know if Barrios going to be enough,” said Thurman. “It might leak over to the next one and the next one, you know? I’m trying to learn to let go.

“I’m trying to forgive myself and let go, but part of that journey is, ‘Let’s just throw a few more power punches and feel more satisfied within the warrior spirit that you carry.

It’s too bad Thurman can’t mentally let go of his loss to Pacquiao because it’s pretty obvious why he lost. 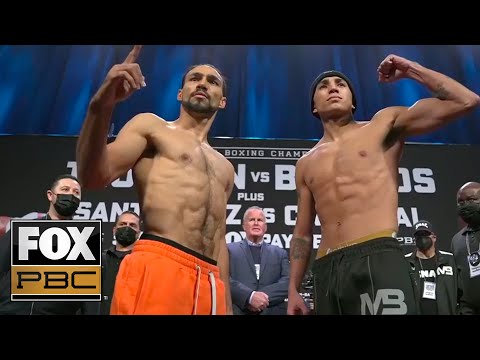 Thurman had been out of the ring for two years after his victory over Danny Garcia, and he’d only had one warm-up fight against Josesito Lopez before the Pacquiao match in July 2019.

What really hurt Thurman’s chances of beating Pacquiao is that he’d gotten fat after his win over Lopez, and he had to take all that weight off in camp.

Thurman says he had to shed 25 lbs in training camp for the Pacquaio fight, and that was way too much for this level of opponent. It’s likely that if Thurman had fought Pacquiao in 2016, he would have had problems beating him without any problems. That version of Thurman would have been too good for Pacquaio.