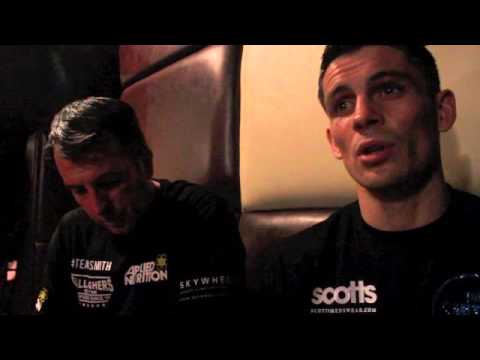 Stephen Smith produced a career best performance on his most important night to demolish the previously unstopped Italian Devis Boschiero, 37-4-1 (19KO’s), in 6 rounds, after dropping him 5 times en-route to victory in this IBF super featherweight world title final eliminator.

From the moment referee Marcus McDonnell brought the fighters together Smith looked in a different class to a fighter who has only previous tasted defeated at the very highest level. Smith looked confident and purposeful, exerting his authority as early as the 1st, sinking powerful hooks into the body of the Italian that seen him gasping for air.

Smith confirmed his dominance in a huge 2nd round, landing a crunching right hook as both fighters looked to exchange, sending his shocked opponent to the canvas. With two minutes to go, Smith smelt blood, unleashing a barrage of punches that saw Boschiero down once more.

The Italian used all of his experience to see the round out, responding well in a 3rd round he lost comfortably to the Smith jab, despite avoiding the carnage of the hellacious 2nd.

As we moved into the 4th round, Boschiero’s left eye had all but closed and Smith took full advantage winging in right hooks, the pressure eventually leading to the Italian taking a knee in the Smith corner to avoid further punishment.

Boschiero showed courage to emerge from his corner for the 5th, when the fight had all but gone away from him. Smith continued to control the action behind a powerful jab, which nullified any intention Boschiero had of finding a home for his chin on home fighters chest.

Smith just wasn’t to be denied.

The end came in the 6th when Smith sent his opponent to the canvas for the penultimate time, with a sickening left hook to the body timed to perfection, removing what fight was left within his stubborn challenger. When the second landed, the pain was felt throughout the building, leaving Marcus McDonnell with no choice but to stop the fight.

A sensational performance, finished in sensational fashion. Stephen Smith moves on to 23-1 (13KO’s) and more importantly a mandatory shot at the impressive Jose Pedraza’s IBF super Featherweight championship, should the Puerto Rican defeat Edner Cherry on 3rd October in Cincinnati.

Pedraza without doubt will provide a sterner test for Smith, but in this form, he will fear absolutely nobody.