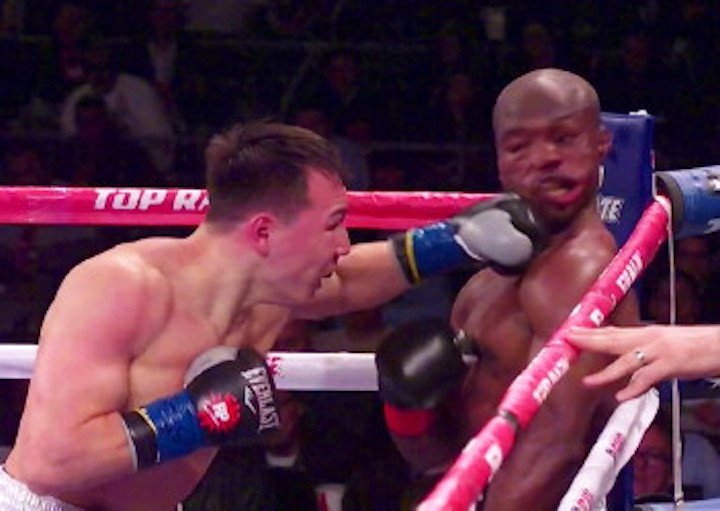 Heaven knows, there are eighty long, long years to go before the 21st century reaches its end, plenty of time for many things to take place – including great prize fights. Still, just recently there has been some early, premature talk of which fight is deserving of being given the amazingly lofty distinction: Fight of the Century.

Promoter Eddie Hearn, no stranger to hyperbole, spoke of how, so far, tonight’s Ruiz-Joshua rematch is The FOTC, as in terms of the biggest, in terms of cash revenue generated, in terms of global viewing figures. Hearn may be right.

But in terms of the greatest action fight, the greatest thriller so far this century, there is, from this ringside seat, a clear winner. Neither fighter was a truly big star at the time (or even now), the fight had nothing like an enormous amount of hype beforehand, and the fight didn’t make gazzilions of dollars. But it should have done.

It was back in March of 2013, when welterweights Tim Bradley and Ruslan Provodnikov fought in California that it happened: one of the most wild, brutal and utterly captivating fights in history. Yes, sir – this one would have held its own in ANY era.

Bradley, so much the better, more polished fighter compared to the seriously tough but somewhat crude Provodnikov, was widely expected to box smart and outclass the big-for-the-weight, hard hitting Russian tank, Instead – and almost certainly due to the frustration Bradley had felt since having won a hugely controversial, death threat-producing decision over superstar Manny Pacquiao the previous year – Bradley, who was the defending WBO welterweight ruler, decided he wanted to make a statement, prove a point, and punish and KO his challenger. The result was a quite sensational, mesmerizing fight.

Bradley was soon hurt, knocked down in the early going (the first-round knockdown scored by Provodnikov erroneously being called a slip by referee Pat Russell). And then Bradley was hurt bad, as in really, really bad, in the second-round. Bradley, his equilibrium gone, was all over the place, his legs equally abandoning him, Bradley was made to pay for fighting Provodnikov’s fight. Fighting on the inside, Bradley, it seemed looking in, was almost asking to be knocked out. To this day, Bradley and Bradley alone knows how he got out of that second round.

Bradley did fight smart at times, keeping the fight at distance and boxing Provodnikov’s ears off. But whenever Bradley made a mistake – of either warring in the pocket or switching to southpaw – he was teetering on the precipice. Reduced to swinging like a drunken sailor when hurt, Bradley showed amazing heart but none of his usual class. Provodnikov was soon busted up and badly cut above and below the left eye in the war, but he kept coming and coming and coming.

Then, when fans had almost screamed their lungs out, they needed more lung power in the very last round. Almost pulling the fight out with what would have been a stunning stoppage, Provodnikov once again landed a smashing right hand, stiffening the legs of Bradley. Bradley was in bad shape and soon Provodnikov had the satisfaction of finally sending this almost unbelievably tough warrior to the canvas. Bradley may not have survived another minute, but the bell came and the fight, of the century (so far) was over.

Watch this incredible fight again and try and make an argument for any other fight being deserving of such a distinction. Was Bradley-Provodnikov better than Diego Corrales-Jose Luis Castillo? In my opinion, yes. Was it even better than the first epic between Marco Antonio Barrera and Erik Morales? Again, for what it’s worth, yeah.

This one was Special, with that capital S.