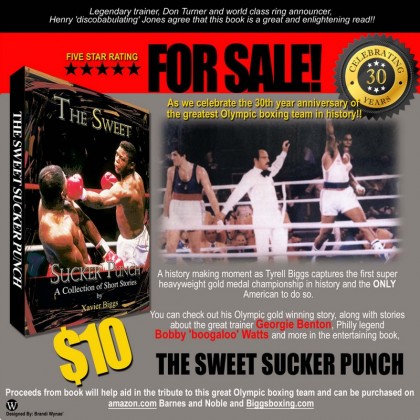 Excerpt from The Sweet Sucker Punch – “A Tribute to Georgie Benton (1933 – 2011)”: It was a balmy spring day in Philly and I was feeling pretty battle ready, so I decided to cruise North Philly and visit ‘Smoking’ Joe Frazier’s Cloverlay Gym on Broad St. I needed unfamiliar sparring to keep my guns sharp. It was about 1pm, a slow time at the gym. There were only a few boxers and a couple of trainers milling around. I remember it well, that nostril-attacking odor of sweaty gloves and pungent hand-wraps when opening the door.

But this smell was spiked with the hint of a familiar, exotically aroma. It was Georgie Benton’s cologne wafting the stale air as he strutted around the floor in his tailor-made outfit and big-brimmed hat angled on his head. Then I heard that unmistakably raspy voice: “Aayy Baby Cakes, ‘what’s happ’nin?”

Ol’ Georgie, as he was known, leaned against the wall, a Daily News under his arm—a real ‘slickster.’ I was glad to see him and replied, “Hey Georgie. Wassup? Anybody around I can get some rounds in with?” Right then some dude came busting through the door with an entourage of about nine or ten teenage kids, all yapping his praises. He paraded across the gym to the locker room, his fan club tagging behind.

Georgie looked and said, “There’s your ring work right there.”…But I was curious, “Yeah, but can he fight?” Georgie pointed his squinty eyes in my direction and quipped, “Just good enough to keep you honest.” “Good. That’s what I need,” I said.

When I returned, dressed and ready, the showoff cat was already on the gym floor stretching, his adolescent cheerleaders standing around, verbally expressing there admiration. It was obvious he wasn’t just there to train. He wanted to put in a show. His silver boxing shoes sparkled, laden with gaudy tassels, and were complimented by silver and black velvet trunks. His body was heavily greased with Vaseline to give his muscles extra glean. I felt kind of corny with my heather gray sweatshirt and sweatpants. Catching his eye, he sized me up. That’s when I knew Georgie had asked him about sparring—when I was in the locker room. We just acknowledged each other and gave a fist dap greeting before warming up.

I noticed his fan club curiously studying me shadowbox. I was obviously caught up in the hype as I was outclassed and out maneuvered for the first two rounds. He wasn’t fast but had slick unfamiliar moves. When the bell rang ending the second round, I was embarrassed. “Yo, Georgie! What do I do with this guy?” I pleaded.

Georgie seemed a little fed up too. “Listen man, when I say ‘Go!’ just shoot the right hand at him.” I was puzzled. “That’s it?” He impatiently snapped back, “Don’t think, don’t hesitate. As soon as you hear me say ‘Go!’ shoot it fast, a straight right hand-right down the pike. You hear me?” I shrugged my shoulders,”Ok.”

Although I was a little perplexed, deep down I knew Georgie had seen something. When the bell rang for the third round, I went in behind a busy jab, anticipating Georgie’s signal. Meanwhile, my sparring partner danced around the ring, entertaining his young impressionable followers with a little creative posturing. About a minute into the round I finally heard that raspy voice, “GO!” My right hand was already cocked and ready. Georgie’s voice was the trigger releasing the torpedo. It came fast with no warning, like brown-skinned lightning. It made solid impact. I don’t know exactly where, but definitely around the head and shoulder area. The dude went down hard and fast. I heard some trainer across the gym yelp in amazement. Georgie just half-smiled and nodded in satisfaction.

My sparring partner pulled himself up from off of the canvas, wide eyed, dazed and humiliated. His admiring attendants were silent; their mouths wide open. I felt kind of sorry for him, and the next round I just transferred my attack to the body and feinted head shots, just to keep him on defense.

After the session Georgie had very few words. “You are better than you think you are. Now go over and work the bag a few rounds, power combinations with dead weight. I got a lunch date with some cute fox I met yesterday. See ya later.” He turned and strolled out the gym with a swagger few men could emulate.

George was an old slickster with a gigantic presence and original style. He was truly one of the master teachers of the “sweet science.” He was assistant trainer to the great “Eddie Futch,” and in Joe Frazier’s corner against Muhammad Ali for that epic battle “THE THRILLA IN MANILLA.” George also helped develop great champions in the seventies and eighties such as Rocky Lockridge, Pernell Whitaker, Meldrick Taylor, Tyrell Biggs (my brother), and many more. His favorite was Evander Holyfield…

Georgie Benton passed away from complications of pneumonia on Monday morning, September 19, 2011 at age 78. He will truly be missed. His spirit will always be alive and strong because he was a master teacher with a powerful style and unforgettable presence.

Links to purchase my book, The Sweet Sucker Punch:

On an end note, I thought about that sparring session and realized how wise Georgie was. Using one word he restored my confidence, gave me the perfect fight plan, and made me realize my potential. Instead of a long drawn out explanation he just went straight to the point…a perfect example of the old saying, “talkers rarely do, and doers rarely talk.”