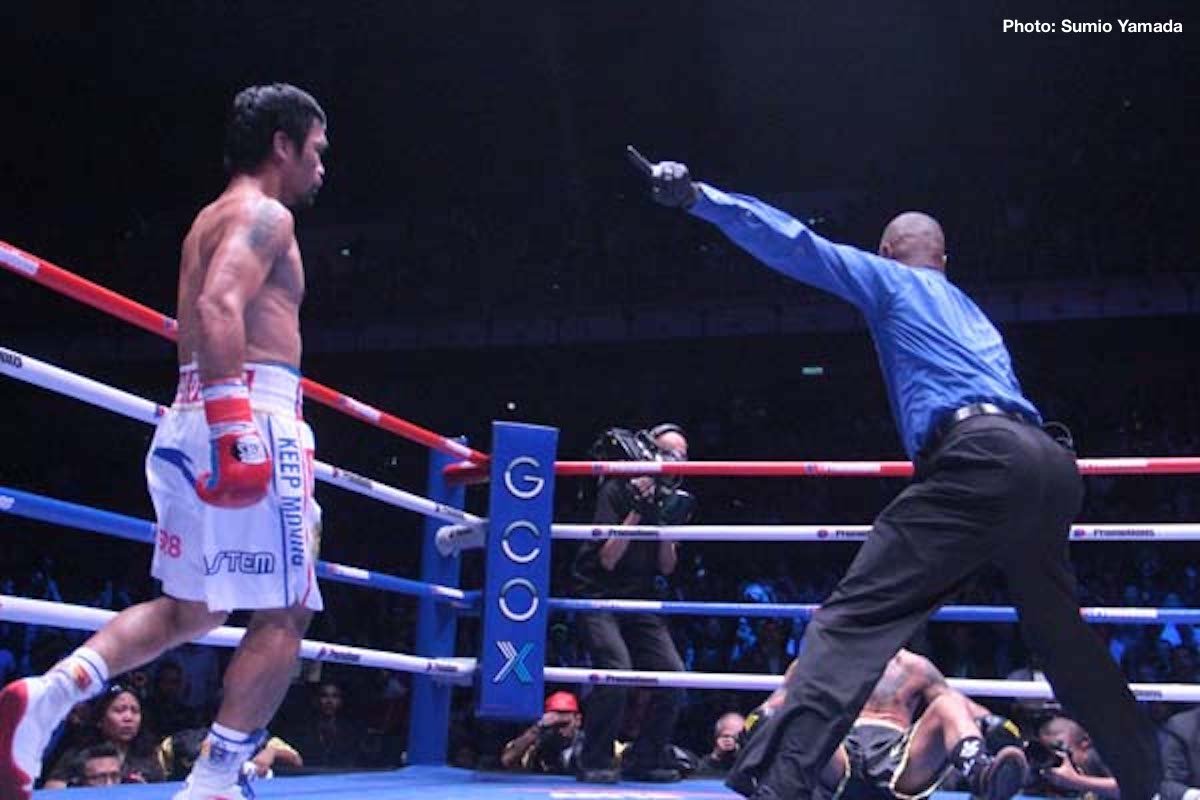 Superstar and all time great Manny Pacquiao has suffered a number of defeats over the course of his long fighting career – seven in fact. Yet one loss above all others troubles Pac-Man; to the extent that the former multi-weight king cannot “with peace of mind” walk away from the ring. The first loss Pacquiao suffered as a pro, to Rustico Torrecampo is not the thorn in Manny’s side, nor is even the KO loss the Filipino suffered at the hands of Juan Manuel Marquez the one that truly bothers him.

No, you can chalk that one up to Floyd “Money” Mayweather. Pacquiao, speaking with The Mirror whilst over in the UK for a prestigious visit to Oxford University, said that he will not and cannot retire until he has a chance to redeem himself against Mayweather; who of course won a comprehensive decision over him back in May of 2015. Despite the fact that Pacquiao continues to insist that Mayweather never truly defeated him – or maybe because of this opinion – Manny absolutely needs that rematch. Also, Manny says the shoulder injury he had to deal with in the richest fight in history was a massive factor.

“I can’t retire with peace of mind because of the defeat,” Pacquiao said. “If you watch the fight, he didn’t throw many punches. First I am fighting Broner and after that there is a big possibility of the Mayweather fight. He is coming back and we are talking about a rematch but we have to deal with these fights first.”

But while Pacquiao has a real fight to deal with next against Broner, Mayweather is taking what many critics are calling another quite farcical boxing/MMA/kickboxing hybrid of a fight against a largely unknown 20 year old who is a natural lightweight and stands just 5’4.” Regardless, if both men win – on New Year’s Eve in Floyd’s case, January 19th in Manny’s case – it is likely the two superstars will meet again.

Manny wants it bad, while Mayweather just wants the money. Yet more of the stuff. It is due to Mayweather’s insatiable craving for cash that Pacquiao will get what he wants. But can Pacquiao possibly gain revenge and beat Mayweather? Pacquiao says, yes, he can. But how would Manny’s peace of mind be affected if he had two losses to Mayweather on his record?