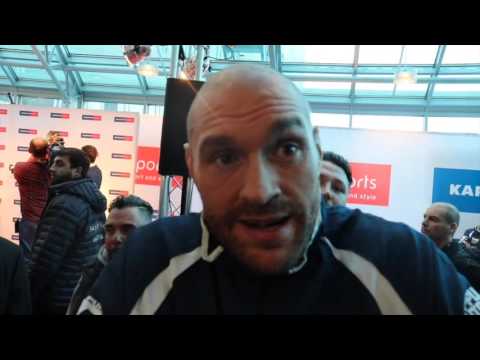 Much has been made of Tyson Fury since it was announced that he would realise his dream of challenging Wladimir Klitschko for the right to call himself undisputed heavyweight champion of the world.

Mind you, much has been made of Tyson Fury since he first laced up a pair of gloves professionally, and you best believe the self-entitled ‘Gypsy King’ wouldn’t have it any other way.

He’s loud, he’s brash, he’s unpredictable and he wins fights, the perfect recipe for a divisive character and as a result ticket seller.

People line up to watch Fury fight and they will do so once more this weekend. Whether that is in the ESPIRIT Arena in Dusseldorf, in a bar or from their sofa, a familiar contradiction will reign throughout the audience.

Half will want Fury to emerge victorious and the other will be desperate to see Klitschko the undeniable ruler of the heavyweight division shut Fury’s mouth for good.

A passionate belief in a fighters own abilities, expressed in an open and colourful manner has forever divided opinion on British shores. The flamboyant, outspoken fighters such as Chris Eubank and Amir Khan could never hope to demand the unwavering support of the masses afforded to their contemporaries Nigel Benn and Ricky Hatton.

The list goes on and is applicable to any nation across the globe, arrogance or ignorance in a fighter’s character is incorrectly considered a flaw, rather than the necessities they actually are.

Without these traits – whether they are communicated overtly as with Fury or displayed in the sheer contempt shown towards opponents come fight night, as with Benn – a fighter is doomed.

The tale of the tape tells depicts a frightening reality, that beyond Dereck Chisora – who Fury has beaten comfortably twice – you would struggle to pick a fringe World level heavyweight from the list of fighters who have shared a ring with the 27-year old from the North West of England.

Not for the want of trying, Fury remains untested at the top level and could very well unravel on the night, it happened to David Haye, it happened to Alexander Povetkin and it happened to Kubrat Pulev, the last three fighters tipped to knock the big man off his perch.

But rest assured not a single thought of defeat would have entered Fury’s head, because despite his press conference antics and constant proclamations of greatness, the man is a serious fighter, ignorant of past records and the challenge facing him.

In his own words he sees a man before him, with two arms, two legs made of blood and bone. A man who holds none of the physical advantages that he has profited from in the past, a man who showed signs of age in his last encounter with Bryant Jennings in New York.

Now, we all know the reality paints a different picture, but Tyson Fury doesn’t see the Wladimir Klitschko we see, whether he is right or wrong, he believes himself to be his equal and when he say’s it, no matter how deluded it might seem to people on the sidelines, you can see in his eyes he believes it.

On the biggest night of his life that ignorance will be his greatest strength, whether that is enough remains to be seen. But, he has not lost before he enters the ring, which when facing a champion of Klitschko’s repute is job number one.