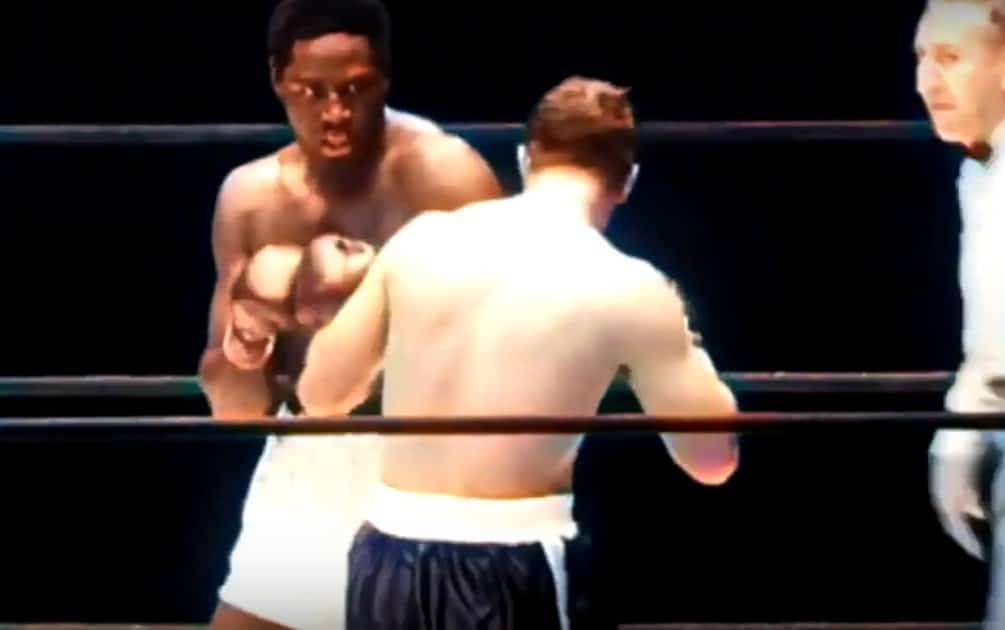 How special was Ezzard Charles? He was so special that these days, if he is remembered to the extent that his incredible talents/bravery and sheer class merit, he is remembered for his epic heavyweight battles. Yet Charles really was no heavyweight; at least he was no natural heavyweight, even during the 1950s, when the big men of the sport were nothing in stature compared to the 6’7” and around 250 pound giants that are commonplace these days (nothing in stature, perhaps, but as far as toughness, heart, desire, well, that’s another story).

Ezzard Mack Charles began his fighting career as a featherweight, compiling a hugely impressive 42-0 record. Naturally gifted and also an extremely hard worker in the gym, the teenage Charles moved up the weights, settling in as a middleweight; winning the Chicago Golden Gloves and then the national AAU 160 pound championship. Turning pro in 1940, an eighteen year old Ezzard was matched tough, as were all fighters back then; really fighting in a wholly different world to the ones pro boxers live in today.

Tough, slick, powerful and possessing incredible stamina and overall fitness, not to mention a sturdy chin, Charles, who was born in Georgia but grew up in Cincinnati (hence his nickname “Cincinnati Cobra”) fought at a breakneck pace: 16 fights in 1940, nine fights in 1941 and 12 fights in 1942. Fast becoming a world middleweight to be reckoned with (and to be avoided), Charles picked up notable, in fact truly special, wins over Charley Burley and Joey Maxim. In fact, Charles beat the criminally avoided (by the world champions) Burley twice, back-to-back, and he also saw off future light-heavyweight ruler Maxim twice, also back-to-back (eventually going 5-0 over Maxim).

Then, in his final two fights before WWII began, Charles lost two fights, back-to-back. Facing two of the members of “The Murderer’s Row,” Charles was decisioned by Jimmy Bivins in January of 1943, and he was then stopped (for the first of just seven times) by the scarily rough and tough Lloyd Marshall (a man who would go on to beat such luminaries as Jake LaMotta, fellow “Murderer’s Row” member Holman Williams, Maxim and Freddie Mills, and who had previously beaten Burley).

Charles was then inactive for a number of months, due to WWII, Charles serving his country with great pride – before he returned to the ring as a light-heavyweight. Charles would hook up with Marshall again (also fighting other members of the “Murderer’s Row” including Bivens, who he finished up at 4-1 with). Charles soon became the clear and obvious best light-heavyweight in the world; his KO revenge wins over Marshall, and more importantly, his three wins over Archie Moore (the third win coming via KO) proving as much. Charles was beaten, via split decision, by Elmer “Violent” Ray in 1947, a few months before his KO wins over Marshall and Moore (and Charles would avenge the loss to Ray, also by KO, in 1948), but he had more than earned a shot at the 175 pound crown.

But no light-heavyweight title shot came. Instead, Charles (who, as a result of the tragic death of his February 1948 foe, Sam Baroudi, who passed away after being KO’d, changed his fighting style and was less inclined to go for the knockout) continued to go to war with the toughest, most fearsome light-heavyweights around, and all for far less money than he deserved. Beating Maxim again in early 1949, Charles was then fighting the crafty and powerful Jersey Joe Walcott for the vacant heavyweight title that June. Charles emerged victorious after a hard 15-round slog and at last he was a world champion. These two would fight three more times, giving the sport one of the most intense, if underappreciated, boxing rivalries.

Charles the heavyweight had to stop himself from training too hard, as he lost too much weight if he went at it full-bore in the gym. Really a natural light-heavyweight, Charles nevertheless engaged in perhaps his most celebrated fight up at heavyweight. Facing the unstoppable Rocky Marciano in 1954 – this after seeing out his series with Walcott (the two finishing all-even at 2-2), defending the heavyweight title on numerous occasions and beating men like Gus Lesnevich and Joe Louis (who had been forced by the IRS to make a comeback) – Charles won the fight in the opinion of many.

Pushing “The Rock” hard, hard, hard and also outboxing Rocky for long periods, Charles was handed a decision loss that could so easily have been placed into his win column. The two met again, with Charles almost ripping Marciano’s nose off his face, before Rocky, showing his greatness, turned it on and got the KO he so badly needed in the eighth.

Charles, never a rich man (in monetary terms), fought on. Winning some, losing others, Ezzard, by now aged 34, incredibly had some 23 fights after losing to Marciano. Sadly, as in breathtakingly sadly, Charles was cut down by Lou Gehrigs’ disease in retirement, and he was wheelchair-bound in his final days, before passing away at the far too young age of just 53 in 1975 (the unsettling footage contained in the 1973 TV commercial that shows a badly disabled Charles in mid-ring sat in his wheelchair is very hard to watch). Marciano, before the funeral (and before his own untimely death in 1969) called Ezzard “The toughest man I ever faced.”