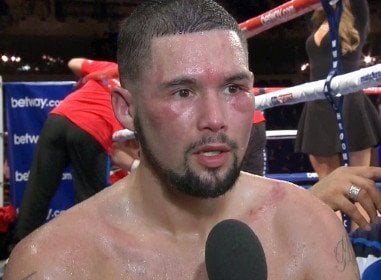 For justification, look no further than Saturday nights fight between Tony Bellew and Nathan Cleverly, which on the back of the success of the Froch v Groves PPV events has been given the same treatment. The basis of this is not down to the enormity of the fight, (there are no legitimate World Titles on the line) rather based on a rivalry carefully built by clever promotion and punctuated by claims from both fighters that this is the best fight in the division. Of course, this isn’t the case; Yoan Pablo Hernandez faces Ola Afolabi for the IBF title in December, a fight that will not get a shred of the coverage.

Then a week later, scores will be settled in London between former Olympian Billy Joe Saunders and the highly regarded Chris Eubank Jnr. Again, a fight I can’t wait to take in, but one which has been built by rivalry, promotional games and claims from Eubank Snr, that his son would beat Gennady Golovkin. On the face of things a preposterous statement, but one that grabs the attention and there have been many more. Whether this stokes a desire to see him fail or succeed, the result is a bigger fight than the Andy Lee and Matt Korobov WBO World Middleweight title fight in December.

Finally we have Tyson Fury a man who is quoted saying; “I’m gonna bang out the Hayemaker with ease! I’ll make it look easy I’m that good! People will say Tyson Fury is the greatest!” ahead of his ill fated and ultimately cancelled fight with David Haye. Statements such as this, either side of his daily social media tirades have seen him established, as a character in a division clearly lacking in men who can ignite either way. Some might call him delusional, but to Fury it’s belief and the reason he is now established on the world scene.

When he fights Derek Chisora on the 29th November in yet another grudge match, minus a legitimate World Title, for the right to considered to face Wladimir Klitschko for the Heavyweight crown, it could be argued that he will do so in a more interesting contest than the champions defence against Kubrat Pulev this past weekend.

Now I’m not saying that a rivalry or charisma being sale-able assets is something new. I’m saying in the past these fights were accompanied by a level of accomplishment and World Titles. What’s clear to me, is the ability to divide opinion is as important as it ever been and Tyson Fury, Tony Bellew and Chris Eubank Jnr do that as good as anyone and they are reaping the rewards.

In psychiatry, delusion is defined as ‘a fixed false belief that is resistant to reason or confrontation with actual fact’, sounds like a useful tool for a boxer to me.