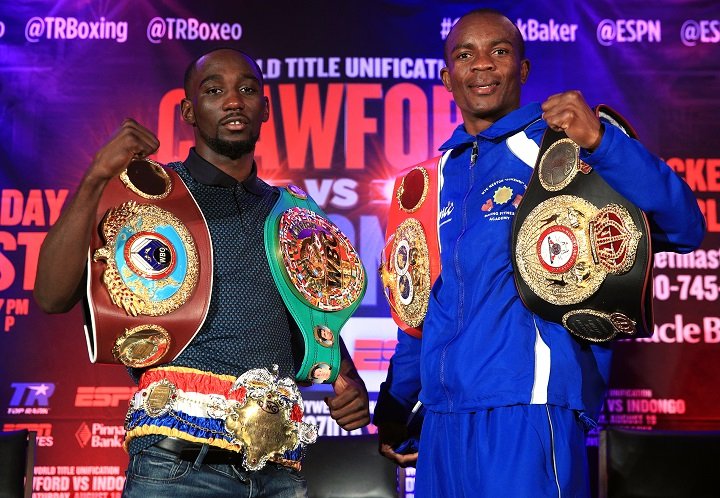 When Terence Crawford and Julius Indongo step in the ring this Saturday night on ESPN history will be on their side. A quality matchup on paper gets majorly upgraded by being the first chance to crown an undisputed champion at any weight in over 12 years. Former middleweight lineal champion Jermaine Taylor was the last undisputed in boxing while Kostya Tszyu accomplished that feat at junior welterweight.

By now if you follow the sport of boxing on a regular basis surely you know Terence Crawford. Crawford is one of the most versatile pugilists in the game but his popularity amongst casuals is limited. The main reason for this conundrum is the two weight classes he’s fought at didn’t have suitable dancing partners. To be a real name in the sport you have to beat a real name in the sport. The best two victories on his resume, Victor Postol and Yuriorkis Gamboa, are known only to the avid follower.

However, Crawford recently stated that he wants the face Keith Thurman at welterweight should he pass the Indongo test. Time will tell. Speaking of Indongo, Julius has made a meteoric rise in the last 9 months in route to a career defining opportunity against Crawford. Last December Indongo shocked undefeated Eduard Troyanovsky via first round knockout and followed it up with a whitewash of three-weight division champion Ricky Burns. Now he sets his sights on doing the unthinkable based off the betting lines for this main event on ESPN. No matter what the outcome is on Saturday just the idea and importance historically of an undisputed bout is very refreshing.

Now that the groundwork has been laid it’s time to get to the nuts and bolts of this matchup. When you strip the term undisputed out of the storyline on paper the third installment of the ‘Top Rank Boxing on ESPN’ looks like a another showcase to extent. I’m sure fans cringe and say how dare you say that, but let’s be honest. Who really thought that Manny Pacquiao versus Jeff Horn was going to be as competitive as it was thank fully. Lomachenko vs. Marriaga was one-sided on paper and even more on fight night.

Pumping the breaks on calling this a 50-50 is in no way taking credit away from Indongo or Bob Arum’s matchmakers. Indongo could in fact pull off a Jeff Horn type performance to give the fans a real show. To be fair Indongo has at least beat a few names rather than a basically unknown Horn was heading into a fight with Manny.

A few items standout when assessing Indongo’s chances to win and they are height, a jab, and power punching. I find myself answering yes and no in two out of the three categories. Does he have a good enough jab, yes he won almost every round against Ricky Burns behind a solid jab. The no part of the equation lends itself to being too predictable with the jab. A real no-no when facing an elite-level counter puncher as is the case with Terence. Power puncher, once again both come in to play. Taking the perfectly landed power punch to KO Troyanovsky out of it and judging his last outing and the number of overall knockouts, Julius has plenty of pop but not overly powerful. Of course height is obvious standing a full 5’10 with a 71.5 inch reach but will he actually use it to his advantage?

All and all Terence Crawford will be too much for Indongo to handle. Although, don’t surprised if it’s all tied up 2-2 after 4 rounds. The one baby-chink in the armor of Terence Crawford is in the early goings as he takes note of what opponents want to do or capable of. A number of fights in the beginning frames show Crawford getting hit flush repeatedly, with Gamboa leading the pack.

Beyond the first rounds with Postol and Felix Diaz, Crawford has been dominating early and often which means he is due for a shaky start of sorts and Indongo is just the guy to do it. Julius’s jab will take a few rounds to adapt to and ultimately come over the top of, hence the 2-2. Look for speed and countering pot shots from Crawford to take over the action. Indongo has never taken a loss so his pride won’t let him go into survival mode unless badly hurt. And since we don’t really know how good of a chin Indongo has a knockout isn’t out of the question. A back and forth start leads to a runaway yet entertaining display of skills by the hands of Crawford.

My Official Prediction is Terrence Crawford by late stoppage.