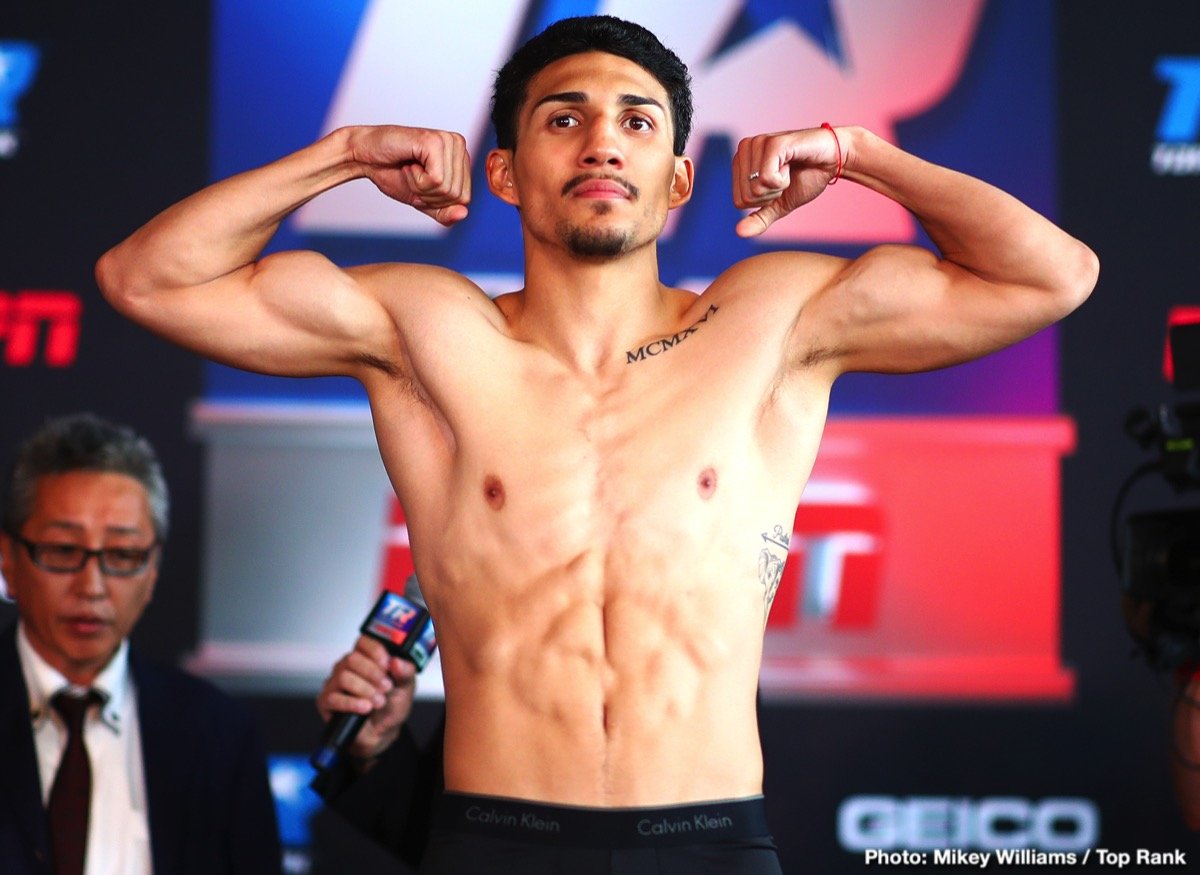 Boxing’s hottest star, undefeated lightweight Teofimo Lopez takes what should be the last step towards securing a world title when he takes on Masayoshi Nakatani (18-0, 12 KOs) in the main event of a big card tomorrow night at the MGM National Harbor in Oxon Hill, Maryland.

With the win, Lopez will be set up for a fall showdown with IBF world champion Richard Commey.

Lopez of Brooklyn, New York has had a meteoric rise up the lightweight division as he has compiled a record of 13-0 with 11 knockouts.

The charismatic 21 year-old Lopez first must get through the undefeated visitor from Osaka, Japan.

Nakatani is the long-time OBPF Lightweight champion, who has cleaned out the best fighters in Japan, and will be making his United States debut.

“Training camp was great this time around, and I just loved how everything was put to schedule,” said Lopez, who is coming off a 5th round stoppage over Edis Tatli on April 20th at Madison Square Garden.

“Nakatani is no pushover, and I know he’s going to come and try to win this fight. He’s undefeated, and is a lot taller than me so he has the advantage with his reach. I trust my coach and my team that our game plan is going to work, and I see us knocking Nakatani out before 12 rounds.”

“A win for me will lead us to become the mandatory challenger to face the IBF World Champion Richard Commey.

“The Takeover is coming July 19 to MGM National Harbor!”

Teofimo Lopez is one win away from a shot at fulfilling his world title destiny. Standing in his way is fellow unbeaten Masayoshi Nakatani, who is intent on spoiling his plans.

Lopez and Nakatani will lock horns in a 12-round IBF lightweight world title eliminator Friday, July 19 at MGM National Harbor in Oxon Hill, Maryland. The Lopez-Nakatani winner will be the mandatory challenger for the victor of the June 28 ESPN-televised bout between IBF champion Richard Commey and Ray Beltran.

Lopez-Nakatani and Dadashev-Matias will stream live and exclusively on ESPN+, the leading multi-sport streaming service, beginning at 10 p.m. ET/7 p.m. PT. The combatants in this special doubleheader have a combined 57-0 record with 47 knockouts.

The undercard, including the 10-round super featherweight contest between the unbeaten Erick De Leon and former world champion Jason Sosa, will stream on ESPN+ beginning at 6:30 p.m. ET/3:30 p.m. PT.

Promoted by Top Rank, tickets for this world championship event priced at $100, $75, $50 and $25 (not including applicable fees) go on sale Friday, June 7 at 10 a.m. ET and can be purchased online at ticketmaster.com or in person at the MGM National Harbor.

“I’m excited to come back, especially for my first headlining bout, one of many to come,” Lopez said. “After Nakatani, you will see me face the winner of Richard Commey and Ray Beltran. If you think you’ve seen it all, you haven’t. My goal is to be a worldwide star, and Nakatani is not going to stop me. Expect another badass knockout, and rest assured, I have something special planned for the celebration. For this fight, we’re doing a nine-week training camp, and I am going to be in the best shape of my career.

“This fight is just a stop on the way to becoming world champion,” Nakatani said. “I hope all boxing fans in Japan and around the world will enjoy what I bring to the table.”

Lopez (13-0, 11 KOs), ranked No. 4 by the IBF, was born in Brooklyn, raised in Florida, and represented his parents’ native Honduras at the 2016 Rio Olympics. The 21-year-old’s rise up the professional ranks has been meteoric, as he made his debut on a Manny Pacquiao undercard in November 2016 and was the consensus 2018 Prospect of the Year. In 2019, he’s graduated to contender status. He knocked out former world title challenger Diego Magdaleno in seven brutal rounds Feb. 2 in Frisco, Texas. Lopez returned April 20 as the pay-per-view co-feature to the Terence Crawford-Amir Khan bout at Madison Square Garden. He thrilled the hometown fans, knocking out two-time European lightweight champion Edis Tatli in five rounds.

Nakatani (18-0, 12 KOs), from Osaka, Japan, is ranked No. 3 by the IBF and has gone the 12-round distance five times. He has held the OBPF lightweight title since 2014 and has made 11 successful defenses of that belt. Nakatani has won four in a row via knockout, and against Lopez, he will be making his first ring appearance outside of Japan.

Dadashev (13-0, 11 KOs) is a three-year pro who has made a seamless transition to the pro game. A former amateur standout for his native Russia, he won a reported 281 bouts in the unpaid ranks before turning pro under the guidance of famed manager Egis Klimas. Dadashev holds victories over former world champions Antonio DeMarco and Darleys Perez and has won nine of his last ten by knockout. He made his 2019 debut March 23 in Costa Mesa, California, knocking out Ricky Sismundo in four rounds. Matias (13-0, 13 KOs), a southpaw from Fajardo, Puerto Rico, has blown through his competition with ease, as seven of his fights have ended in the first or second round. He made his American debut last October in New Orleans, blowing away former two-division world title challenger Fernando Saucedo in one round.

“It doesn’t matter who I fight or where I fight. I am looking forward to the opportunity in front of me,” Dadashev said. “Matias is a dangerous fighter, but I am ready for whatever he brings. I have fought every kind of style as an amateur and a professional, and all of my experiences have led me to this fight.”

Sosa (22-3-4, 15 KOs), from Camden, New Jersey, upset Javier Fortuna in June 2016 to win the WBA world super featherweight title. He made one successful title before relinquishing his belt to pound-for-pound great Vasiliy Lomachenko. Sosa has won a pair of fights since a controversial decision loss to Yuriorkis Gamboa and knows that a win over De Leon (19-0-1, 11 KOs) will move him closer to another crack at the brass ring.