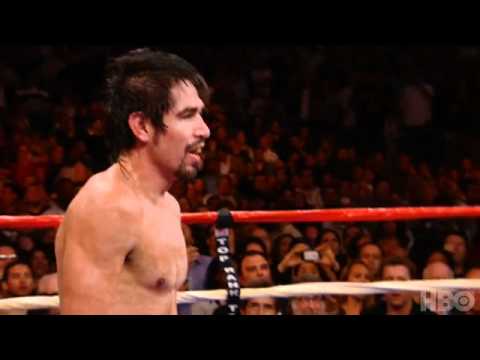 “Sugar” Shane Mosley fought one of his greatest fights; certainly his most aggressive, ruthless and nasty fights. Though deemed past his best at age 37 and in danger of a beating at the hands of the big-for-the-weight Antonio Margarito, Mosley instead put on a violent master-class in Los Angeles a decade ago today.

The former lightweight and welterweight ruler challenged WBA welterweight champ Margarito – the fearsome Mexican being deemed unstoppable and extremely dangerous, this despite his quite recent decision loss to “Punisher” Paul Williams – and most people thought the 31 year old from Tijuana would have too much firepower, toughness and sheer brutality for the significantly older man.

Instead, doing the unthinkable, Mosley smashed Margarito to a stoppage defeat that came in as one-sided a beat-down as you could never have predicted. Mosley was sensational in his relentlessness. You could make a case that Margarito, despite his advantages in size, age and, it was thought, power, failed to win a single round. On this night, Mosley put his fast, accurate and stinging punches together in stunningly impressive fashion.

Margarito soon looked bewildered and he was set to take a whole lot more pain. Blasted to the mat near the end of the eighth-round, Margarito was in dire trouble. The fight could easily have been stopped, with only the Mexican warrior’s reputation allowing the slaughter to continue. Margarito made it back to his stool, just, but he was in no shape to fight in round-nine. Decked a second time in the 9th, Margarito was rescued by the referee. Mosley had pulled off one of the big upsets and he had never looked so good.

Margarito, who was coming off a brutal stoppage win over Miguel Cotto (who had beaten Mosley quite soundly via decision in 2007) never knew what hit him. But then the boxing world was shocked a second time. The soon to be infamous ‘loaded wraps’ scandal all but destroyed what was left of Margarito; the discovery by Mosley’s new trainer, the brilliant Naazim Richardson, of an illegal substance on the Mexican’s hand-wraps ahead of the fight in the dressing room forever tainting Margarito’s previous achievements.

How long had Margarito been cheating? Had he used loaded wraps in his other big fights? Cotto sure thought so, and the Puerto Rican gained revenge when the two fought a rematch on what was this time a level playing field.

Ten years on, and most people think of the wraps scandal when they are reminded of the Mosley/Margarito fight. What followed after the fight does not, however, take away from Mosley’s awesome performance. In fact, Mosley was so good on the night of January 24, 2009 that he was unable to get anybody to face him for almost 16-months.

Shane Mosley had a number of special nights in the ring – his two wins over Oscar De La Hoya being very special – but for many, his crushing of the bully that was the once admired Margarito ranks as “Sugar’s” sweetest night.