Light welterweight contender Montana Love (18-1-1, 9 KOs) lost his cool in the sixth round, shoving underdog Steve Spark (16-2, 14 KOs) out of the ring, resulting in a disqualification on Saturday night at the Rocket Mortgage FieldHouse in Cleveland, Ohio.

Love had suffered a cut over his left eye in the sixth, and he seems to come unglued in reaction to that. After being examined by the ringside doctor, Love charged forward and pushed Spark to the ropes and then shoved him out of the ring. 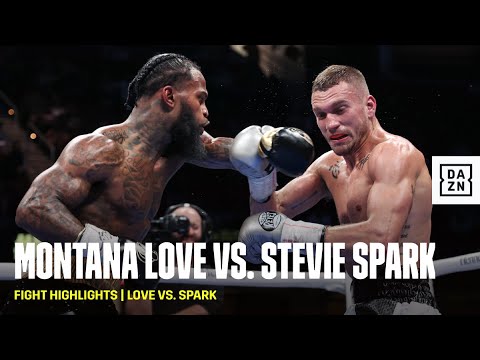 Love and his trainer complained to the referee that Spark had been fouling with elbows, but the call stood. The referee wasn’t going to change his mind, as he was convinced that Love had intentionally shoved Spark out of the ring.

The referee immediately disqualified Love for pushing Spark out of the ring. Love’s promoter Eddie Hearn immediately jumped into the ring, saying that they would appeal the referee’s ruling on Monday and have the results changed to a no contest.

On the instant replay, it looked intentional on Love’s part to shove Spark out of the ring.

Earlier in the fight, Spark dropped Love with a hard right hand to the head after hurting him with a right that caused him to retreat along the ropes.

Rounds three through five were close and difficult to score. Spark landed the harder shots against the southpaw Love, but he was still getting caught a lot.

In the sixth, Love suffered a cut over his left eye from a clash of heads with Sparks. At that point, the ringside doctor examined the cut, and it looked like Love was complaining of not being able to see out of his eye.

It’ll be interesting if Eddie Hearn succeeds in his appeal to overturn Love’s loss. Even if he does, Love still looked very poor tonight and not in the same league as the top light welterweights in the division.

What we saw tonight from Love, as well as in his last two performances, he’s not going anywhere in the 140-lb division.

Matchroom might need to think hard about whether he’s worth keeping around because he’s going to have to continue to have problems with fighting good opposition.

Had this been the likes of Regis Progais, Jose Zepeda, Jose Ramirez, or Teofimo Lopez, Love would likely have been knocked out.