Steve Cunningham says unified heavyweight champion Oleksandr Usyk will defeat Tyson Fury by split decision or disqualification. Cunningham feels that Usyk (20-0, 13 KOs) is a better boxer than Fury, and he’ll be able to beat him with the angles, movement & volume punching.

Cunningham says Fury won’t be able to get away with the borderline illegal tactics he uses, such as constant leaning on his opponents and pinning them down to keep them standing still so he can hit them.

With that said, Cunningham has doubts that the Fury-Usyk fight will take place because he feels Fury doesn’t want the fight.

He says Fury’s huge money demands for the fight are an early sign that he’s going to price himself out and then go in a different direction towards a more beatable foe.

Usyk’s style of fighting is all wrong for Fury, as he’s slow and depends a lot on his ability to grab his opponents in a bear hug and lean on them to drain them.

Cunningham says Usyk’s management will warn the referee ahead of time not to allow Fury to use this tactic without being penalized and or disqualified because he’s gaming the system.

Read:  David Haye dares Fury to battle Chisora toe-to-toe like he said he would

“It goes to show the work of a smaller man. That’s why I think with this Fury-Usyk fight. This fight is tricky. There are components where both of them can win, and areas where both can lose.

“In order for him to KO me, he had to hold me still, ‘I’ll get you there.’ He got Deontay Wilder. Wilder’s cardio wasn’t that up to par. Let me start with Usyk. Usyk is 6’3”, the same height as me, and very athletic.

“Usyk is a better me. He’s a southpaw, 6’3”, cruiserweight champ. He’s a better me because he became undisputed. Usyk is better than me. When he fights Fury, there are two reasons why I got Usyk.

“One, when Usyk fights Fury, his angles are going to be unbelievable. Usyk’s angles, his movements, his brain, his boxing mentality is off the charts, and his fortitude is great. He’s going to get in there and use angles and movement.

“Fury and Joshua are not the same. Anybody thinking that Joshua is big to, that’s the way he’s going to fight Fury. No, it’s not. It shouldn’t be.

“Number two with Usyk, the most powerful reason I believe Usyk is going to be able to get over on Fury is because Usyk has power behind him. I’m not talking about power. I’m talking about the business side of boxing.

“It’s a great tactic because it drains your opponent. It drains the guys he’s fighting. In the third or fourth round, look what it did to Wilder. When he did it to me, Eddie Cotton took a point or two.

“He took a couple of points. So when you look at Steve Cunningham fighting Fury, I didn’t have a promotional team that was really behind me at the time. My manager was my wife. It was us.

“We didn’t have any power in that area or strings to pull or anything to make our side stronger. It was just us and our skill and the mental power that Nazim and myself worked as the management team.

“Now, look at Usyk. Usyk has got Egis. Talk about power. This is what I’m saying. People fail to look at that side of boxing. Egis is a general out here. You see all the guys he has.

“It’s either going to be a big thing in fighter meetings building up to the fight amongst them behind the scenes with the officials. If and when it happens in the fight, Fury is going to end up getting DQed [disqualified] because Fury has to do that to Usyk in order to win.

“Fury doesn’t beat Usyk by standing back and boxing. Usyk wins that fight. If Fury wants to walk him down and try and dog him out. I was still able to move, but he had to pin me.

“When I was doing it, it was working, and then he was still getting in some of those lean-ins. I was getting a little drained, but I always get my second and third winds. I’m like, ‘Let me get out of this round, and I’m going to be cool.’  But then [Fury pinned Cunningham & nailed him] and boom. Game over.

“I just wasn’t prepared for a guy like Fury. ‘I’m going to pin him and lay on him. He’s still moving [pin him] and boom.’ That’s why I say it could be a split decision win for Usyk or a disqualification.

“I don’t think they’re going to allow Fury to do what he does, and that’s how Fury gets those wins. Like I say, it’s a good tactic. It’s rough fighting, it’s borderline legal, and you can get called on it.

“That’s a very hard fight for Fury. Guys are size; we’re 6’3”. That means we’re tall enough to reach the big guys and big enough to have power to get them out of there. You saw what I did to Fury, and I stung Fury a few times in that fight.

“That’s why I say Usyk is perfect because he doesn’t go for those knockouts. Usyk is a volume puncher. Don’t get it twisted. I guarantee those volume punches have power. He’s hitting hard.

“If a fighter doesn’t want to fight, what will they do? They’ll overprice themselves. Did you see the Tweet from Fury yesterday? $500 million? Nobody was paying $500 million for Joshua-Fury, and that’s a better fight, a more exciting fight than Usyk beforehand. You ain’t getting now $500 million. 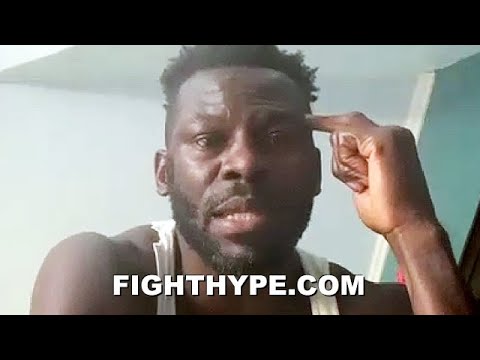 Read:  Fury: “Joshua Hasn't Got The Minerals To Fight Wilder; Wilder Would Knock Him Out Cold”
Share55
Tweet