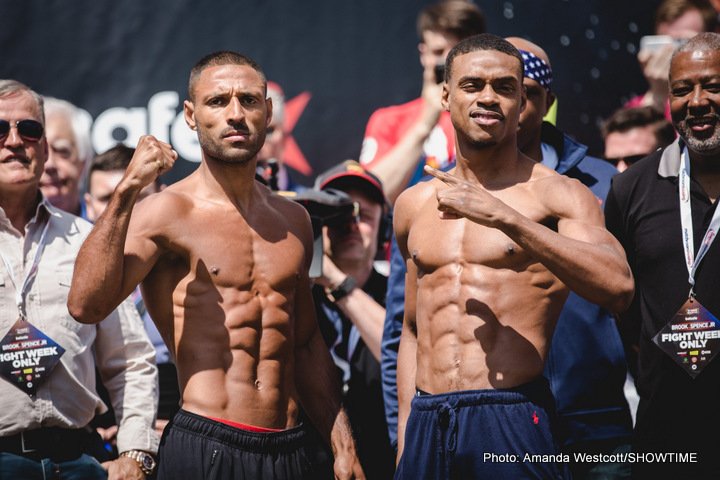 Errol Spence’s overall goal on Saturday night is to knockout IBF welterweight champion Kell “Special K” Brook (36-1, 25 KOs) in front of his own British fans at Bramall Lane in Sheffield, England. Spence, 27, doesn’t want to beat Brook in front of his fans just to be mean-spirited. He wants to beat the 31-year-old Brook so that he can take his boxing fans and add him to his own collection of fans.

Look at Spence as on a mission to not only snatch Brook’s IBF 147 pound title, but also to take his fans as well. Spence has a good chance of doing that. as he’s viewed as the next star in the 147 lb. division. Boxing experts believe that Spence has the talent to take the spot previously occupied by Floyd Mayweather Jr. at welterweight. Brook stands in Spence’s way. We’re going to find out quickly on Saturday night if Spence is the fighter that people say he is or if he’s just a pretender.

Spence can still be the guy that takes Mayweather’s place even if he loses a decision. It would depend on how he loses it. If Spence is robbed by the judges, which unfortunately is a very real possibility as a visiting fighter, then it would still be seen as a victory for him. Hopefully, the judges don’t have a say so in this fight because they could mess this one up if they come up with strange scoring like we sometimes see in boxing.

“This is something I’ve been waiting for and I can definitely knock him out in front of his home fans,” Spence Jr. said to Sky Sports News HQ. “It’s nothing but motivation; they’ll be cheering for me at the end of the night. It’s wartime, all the talking is over, it’s time to glove up and see who is the best welterweight in the division.”

Spence isn’t bothered at all in fighting in Brook’s hometown. That’s pretty brave of the American, because a lot of fighters would likely not want to take the risk unless they were given a huge payday for their trouble. Golden Boy Promotions CEO Oscar De La Hoya thinks Spence and his management is making a mistake in him going over to the UK to fight Brook. De La Hoya sees it as too risky for it to be worth it. He says that if he were promoting Spence, he would keep him at home in the U.S and would build his brand over there.

De La Hoya thinks that there are too many chances of something going wrong with Spence fighting in the UK. He think Spence could be robbed by the judges by them not giving him the ‘W’ if he gets the better of Brook on Saturday night. That might be one reason why Spence wants to knockout Brook so badly. He’s kind of in a situation where he might need a knockout to keep from losing by a questionable decision. Spence has a good manager behind him in Al Haymon, so hopefully if he does wind up on the short end of the stick in losing by a controversial decision, they can get him a rematch. It’ll be interesting to see if the International Boxing Federation steps in and orders a rematch if the Brook-Spence fight ends in controversy.

“I feel great, strong. I’m ready to fight, made the weight. So now it’s time to eat, stay strong,” said Spence. “You’ll see the game plan tomorrow. But you can expect an action-packed fight; this is going to be one for the books.”

The game plan for Spence will likely involve him pressuring Brook from the outset. That’s Spence’s usual style of fighting, him pressuring his opponents and throwing body shots. Spence showed in his last fight against Leonard Bundu that he can fight well on the outside by jabbing when he needs to. Bundu was throwing a lot of punches in close, making it hard for Spence.

Initially, it was not an easy fight for Spence until he figured out how to get the better of the shorter Bundu from the outside using his jab. The jab setup Spence’s big uppercuts that he used to chop down Bundu in the 6th round. One fact that many boxing fans overlook in this fight is Spence’s 3” inch reach advantage over the 5’9” Brook. Spence has longer arms, and he’s quite capable of getting the better of Brook on the outside. Brook’s reach is essentially the same as Spence’s last opponent, the 5’6 ½” Bundu.

Brook could be at the mercy of Spence if he chooses to stay on the outside and beat Brook in a tactical battle. If Brook finds himself getting out-boxed from the distance, he would need to fight Spence’s fight by pressuring him. I don’t fancy Brook beating Spence in a one-on-one fight. I think it ends BADLY for Brook if he chooses to mix it up with Spence for any length of time. Spence is the better inside fighter and the harder body puncher of the two. Brook might have a chance if he can keep the fight on the outside for 12 rounds, but that’s a big if.

Brook, 31, had to go through a great deal for him to get down to the 147 pound weight limit on Friday. Brook still needs to make weight on Saturday morning for the IBF’s check weigh-in. Brook could lose his title if he fails to make weight. I’m sure he won’t mind that too much as long as he wins the fight. I think that’s the overriding concern here.

If Brook can be seen beating Spence, it would give the boxing public the perception that he’s the best fighter in the 147 pound division. I don’t think Brook would lose any sleep at him being criticized for him gaining an advantage over Spence by skipping the IBF’s mandated fight date weight check. It didn’t hurt Danny Jacobs that he gained an advantage over Gennady Golovkin by him skipping the IBF’s weight check in their fight on March 18.