Saint Valentine’s Day – a time when most people are busy getting romantic. For some prizefighters, the day proved to be anything but a love-in. Here is a look at some of the memorable big fights that took place on this special day.

Holyfield, still just 13-0 as a pro, was having his second fight since going through sheer hell to relieve Dwight Muhammad Qawi of the WBA cruiserweight title. Good friend and former team-mate Tillman, 14-1 (the loss coming against Bert Cooper) got what turned out to be his one and only world title shot. Holyfield was far too good in all departments and, showing zero friendship, “The Real Deal” took Tillman out in the 7th round of a largely one-sided affair.

On the same day, at the same weight, but over in Canada, the world saw a young Bert Cooper at his most vicious. Taking on accomplished and celebrated amateur de Wit, a 21-year-old Cooper absolutely destroyed the 1984 Olympic silver medal winner.

Cooper’s hooks were far too much for local hero de Wit, who was decked heavily in the opening round and was then finished off in ruthless fashion in the second. De Wit never lost again, retiring at 21-1-1(14) in 1988. Cooper went on to give us too many thrills to be able to keep a track of. 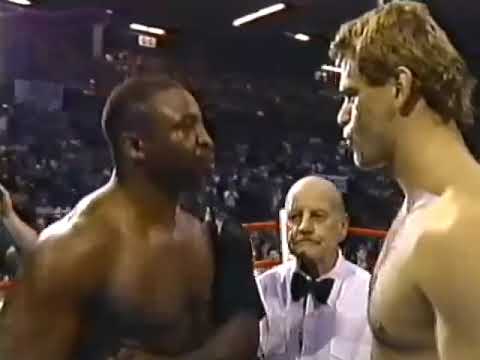 “Fireman” Jim Flynn had shocked future heavyweight king Dempsey the year before, sensationally (and controversially) KO’ing Dempsey in just 25-seconds of the opening round. Was the fight fixed? Did Flynn catch Dempsey with a sucker-punch?

To this day, reports vary. But in the return match, Dempsey turned the tables and iced Flynn inside a round. The following year, “The Manasa Mauler” was world heavyweight champion.

Ali, still looking to get a chance at regaining the crown he had lost to Joe Frazier in March of 1971, met the tricky Bugner in Las Vegas.

Ali was far too good for the defensive-minded Bugner, bagging the lion’s share of the rounds to take a comfortable unanimous decision victory. These two met again two years later, with Ali’s regained world title on the line. Ali always had nothing but respect for Bugner.

One of the most brutal fights of all time, “The St. Valentine’s Day Massacre” saw Robinson take out the tougher than tough “Bronx Bull” for the only time in their epic rivalry. The pounding the iron-jawed LaMotta took in the later rounds of this incredible fight shook even hardened observers. Bloodied and thoroughly beaten, Jake refused to fall. In the end, the referee had seen more than enough, diving in to rescue a helpless LaMotta in the 13th round. This fight was of course immortalized in the film ‘Raging Bull.’