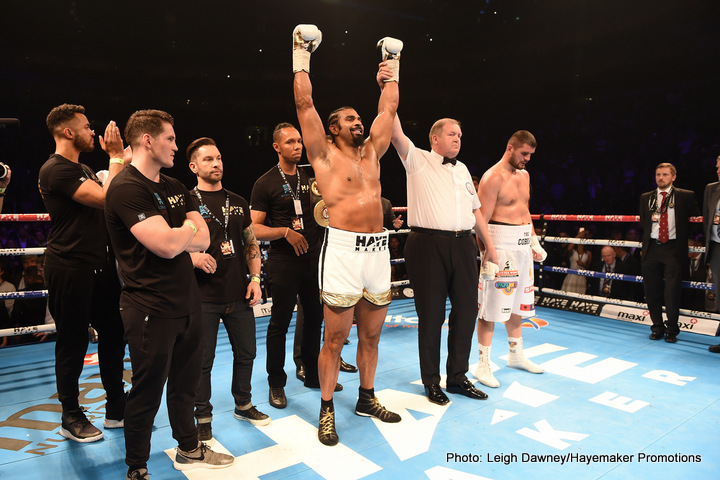 Shannon Briggs is certainly persistent. Having been chasing David Haye for a few months now – crashing the former WBA heavyweight champ’s press conferences, turning up at his gym in London and finally fighting on his under-card – Briggs was in hot pursuit of Haye last night in New York. The vocal, “Let’s Go, Champ” 44-year-old turned up at the Carl Frampton-Leo Santa Cruz fight at The Barclays Centre and he chased after Haye upon seeing his ring target.

Haye tried his best to ignore his tormentor, but on thing is clear: Briggs is not going to go away. But does Haye still like the idea of swapping bombs with “The Cannon?” The last we heard, when the two former champs blew away mismatched opposition in May, the two would clash in London, probably in September. Since then……nothing, at least nothing from Haye. Briggs is on social media at every opportunity calling for the fight and shortly after the passing of the great Muhammad Ali, Briggs vowed to KO Haye in one-round in honour of “The Greatest.”

But here we are, almost into August, and the Haye-Briggs match-up, one that has intrigue to it, has not been officially announced. Does Haye still want the fight, or has he has second thoughts, perhaps looking at the in-shape veteran as a dangerous puncher who brings too much risk and too little reward? If Haye has got himself a bigger fight – maybe a fight for the vacant WBA regular belt that was held by Lucas Browne until it was stripped from him and returned to Chagaev who has now apparently retired – then fine, he couldn’t be blamed for moving past Briggs and taking a more meaningful fight instead. But has Haye got a fight, one that he cannot divulge for the moment?

If not, then why the delay in getting the Briggs fight done and dusted? After all the hype and the war of words, with Haye also vowing to score a quick KO so as to “get rid of this fool,” some fans want to see who wins. Don’t let it be said that Briggs is correct when he says Haye is “scared” and is “running” from him!