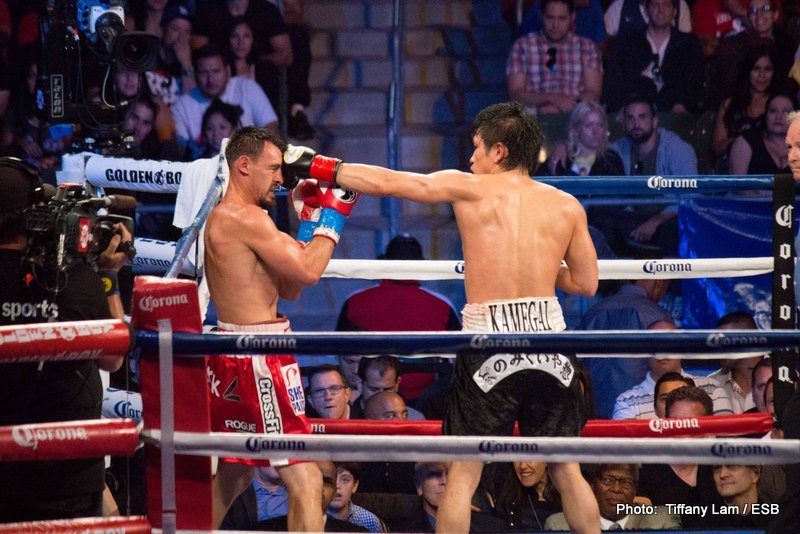 The StubHub Center in Carson, California has become one of the favorite venues for west coast fight fans. Tonight thousands came out for another stacked card from Golden Boy Promotions, with the three signature bouts featured on a Showtime Championship Boxing triple header. Let’s get into the fights.

Both of these welterweights entered the ring coming off loses and in desperate need of a win. Saint Louis native Alexander lost his IBF title via decision last December to Shawn Porter, while Soto Karass was stopped by power punching Keith Thurman later that same month.

Soto Karass was the bigger man in there and the fan favorite, as he makes nearby North Hollywood his home. Southpaw Alexander looked sharp early, circling to his left and throwing a variety of accurate punches. Jesus stalked forward and had his moments, but it was Devon who appeared to be doing the more consistent work. The fighters opened up into the middle rounds, standing in the center of the ring at times and teeing off in heated exchanges. Soto Karass applied nonstop pressure, slowing down Alexander’s movement and working his way back into the fight. But as the late rounds approached, the Mexican native appeared to be getting tired. None the less, he went all out in the 10th and final round, going for broke with wild haymakers. Yet Alexander stood his ground, exchanging with the bigger man and even walking him down at times. It was a great effort from both men and a solid fight. The judges scored it 97-93 and 99-91 twice for Alexander, who improves to 26-2 and figures to have another title opportunity in his future.

Russell attempted to silence critics of his recent lackluster opposition taking on Lomachenko, who came in off a loss to rugged veteran Orlando Salido in a WBO featherweight title bout in March. However, since Salido didn’t make weight for that fight, the title remained vacant and the WBO sanctioned tonight’s match to determine a titlist.

Right from the opening bell it was clear that these were two very skilled, very athletic, very fast southpaws. The early rounds were close, competitive and difficult to score, but it appeared that Lomachenko may have edged them with some vicious body shots. Russell appeared to have the better hand speed, but the Ukrainian’s punches seemed to have more pop. As the rounds progressed the American got into a rhythm and worked nicely behind the jab, but Loma’s body shots echoed through the arena. None the less, Russell was more consistent and may have been winning the middle rounds by staying busier. The Washington DC native has unworldly speed and controlled portions of rounds simply by letting his hands go, seemingly freezing his opponent in those moments. It appeared that this fight would ultimately be decided on judging style – whether they preferred Russell’s higher output or Lomachenko’s harder shots. The bout felt even going into the championship rounds, and that’s when Loma appeared to take over. The Ukrainian simply landed the harder punches (with 57% accuracy on the body work) and hurt his opponent badly in the closing seconds of the fight.

One judge had it a draw at 114-114, while the other two judges turned in better scores of 116-112 for Lomachenko, who is now a world titlist in just his third professional bout.

This was Guerrero’s first bout since his shutout loss to pound for pound king Floyd Mayweather last May. And for Kamegai, it was his second fight at the StubHub Center; having fought here last year (a decision loss to Johan Perez). Both fighters looked in tremendous shape and full of focus during their introductions.

In the opening rounds Kamegai came forward but didn’t throw many punches, while “The Ghost” worked well upstairs and downstairs. The Japanese fighter wasn’t coming in behind the jab or moving his head, and Guerrero took advantage. Things began to change in the 3rd however with nice exchanges between the fighters up against the ropes. Blood began flowing out of Kamegai’s nose in the 4th, clear evidence that he was getting the worst of it in there. However by the 5th round the Japanese fighter had suckered his opponent into a brawl with plenty of old fashioned “phone booth fighting” as both men stood toe to toe and swung for the fences. Kamegai was hanging tough, getting his own licks in and not only busting up Robert’s left eye, but winning over the respect of the crowd. Both boxers seemed to abandon the game plan in the middle rounds and be content with an all-out street fight, which the fans absolutely loved. By the 8th round, Guerrero’s left eye was closing up on him and both fighters were showing battle scars on their faces.

It was bombs away and going into the championship rounds the fans felt they had a fight of the year candidate in front of them. Kamegai was taking tremendous punishment and dishing out his own, while Guerrero was fighting with one eye and refusing to give up any ground. Even with his limited sight and his opponent’s nonstop pressure, The Ghost consistently got off the harder and more accurate combinations. The first minute of the 12th round was stunning; Guerrero opened with a huge right hand that snapped Kamegai’s head back. But the Japanese warrior responded with murderous punches of his own that backed his opponent off. Neither man was willing to move backward, both were exhausted but still gunning for the knockout until the final bell. In the end the judges scored it 116-112 and 117-111 twice for Guerrero, who improves to 32-2-1.

As usual, it was a great night of boxing in Carson with passionate crowd making for a fantastic atmosphere. If you live in the southern California area and are yet to attend a card at the StubHub Center, do yourself a favor and catch the next one. Something about this place just seems to make for great fights. Once the sun goes down and the stands fill in, something in the air takes over and amazing things tend to happen in the ring.