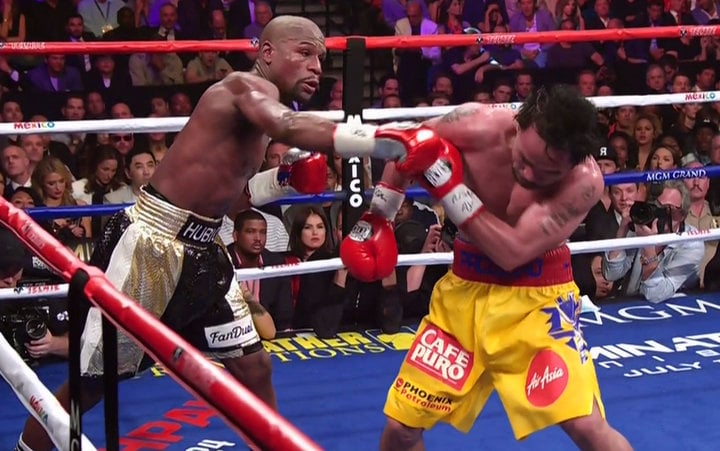 Wanna see a rematch between “retired” great Floyd Mayweather and “retired” great Manny Pacquiao? If you do, and if there are enough fans around the world asking for a rematch of last May’s “Fight of The Century,” it could happen. So says Showtime boss Stephen Espinoza. In speaking with RingTV.com, Espinoza said he has spoken with Mayweather Junior recently, and that the feeling he got was that the 39-year-old would “strongly consider” giving fans any fight – including a rematch with Pacquiao – if the demand were great enough.

“I thought Pacquiao looked good [against Bradley], looked as good as he has looked in the last three or four years,” Espinoza told Ring. “He was active. He showed the power. He was quick. But really in terms of a Mayweather rematch, it’s really up to the audience, to the fans and the writers. I know from talking to Floyd – if there’s a demand for a particular fight – I think he will give it strong consideration. But I think this is one where we’re not going to put the cart before the horse. If people are interested in that fight then I think they’ll make their voices heard and we’ll start working on it.”

So, will you make your voice heard and demand a rematch? We all know the first fight, won by Floyd via a wide unanimous decision, was not in any way a great fight; in fact it was, in the opinion of many, a colossal letdown. But the possible intrigue is there for a rematch due to one thing: Pacquiao fought the first fight injured (his shoulder injury that he concealed ahead of the biggest money fight in all of boxing). Maybe there are enough fans out there who want to see if a 100-percent healthy Pac-Man would have enough speed, power, aggression and energy to defeat Mayweather.

And of course money comes into it. The first fight made gazillions, therefore why wouldn’t the powers that be, including Floyd himself of course, want to pick up such an enormous payday again? But would the rematch, if it did happen, be anywhere near as big as the first fight? Or would millions of fans, who felt cheated in the first fight and are sure a sequel would be more of a “Jaws II” than a “Godfather Part II,” stay away for fear of being cheated again?

Even if Mayweather and Pacquiao do not fight each other again, it seems hardly anyone is convinced the two future Hall of Famers have actually retired for good. Fans, experts and fellow fighters are sure one or both of the two legends will lace ’em up at least once more. But who would Floyd come back for if not Pacquiao, a man he has already comfortable beaten? What would get the fires really burning inside of Pacquiao other than a Mayweather rematch and a chance at revenge?

Maybe as Espinoza suggests, enough fans will demand both greats get it on again, and maybe “Money” and Pac-Man will comply.