In his return to ShoBox: The New Generation, Saul Sanchez scored a first-round knockout to topple unbeaten rising star Ja’Rico O’Quinn in stunning fashion on SHOWTIME® Friday night in front of an enthusiastic outdoor crowd on Main Street of the Rose District in downtown Broken Arrow, Okla.

Sanchez (17-1, 10 KOs), a once-beaten prospect who has fought four times since O’Quinn (14-1-1, 8 KOs) last entered the ring, started fast by flooring the Detroit native with a huge left hand just a minute into the opening frame of their bantamweight main event. O’Quinn, who last fought in January 2020 on ShoBox, was never able to recover from the initial knockdown as Sanchez overwhelmed the highly regarded prospect en route to his career-best victory. 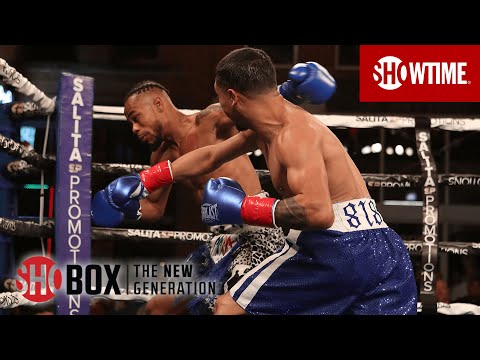 “I just stayed calm and knew I had to work behind my jab but then I surprised him with my left hook and I saw that he got dropped and was hurt,” exclaimed the excited young prospect Sanchez. “That’s when I finished him. Honestly, I never envisioned the knockout that early. In the later rounds, yes. But not that early.

“This moment feels amazing. I made a big statement. He was undefeated and I was on the ‘B’ side. And now I move onto bigger and better things. I will fight anyone right now and I am going to work my way up to a world title. I want to fight again this year. I know I gained a few more fans tonight.”

Hailing from Pacoima, Calif. and trained by renowned trainer Manny Robles, Sanchez effectively eliminated O’Quinn’s ability to recover by landing a huge right hand to the temple that sent the unbeaten star to the canvas moments later. Referee Gary Ritter allowed O’Quinn to continue but Sanchez did not let up and delivered an onslaught of clean combinations that promptly ended the fight at 1:58 of the first round. Ranked ninth by the WBA at 118 pounds, the 24-year-old Sanchez has positioned himself to earn bigger opportunities in the exciting bantamweight division.

“I could feel something was wrong in the dressing room,” said the 26-year-old O’Quinn. “I didn’t even feel like warming up. I knew something wasn’t right and I tried to work past it, but it was not my night. He did what he was supposed to do. He was just the better man tonight and I have no excuses. I will be back. This is a temporary setback.”

In a battle of unbeaten prospects in the co-main event, Luis Nunez (12-0, 8 KOs) of the Dominican Republic made a statement in his U.S. debut by upsetting Cincinnati’s Jayvon Garnett (10-1, 5 KOs) via unanimous decision in their 10-round featherweight bout. The judges saw the fight a shutout with three identical scorecards of 100-90.

Fighting on his 22nd birthday, Nunez dictated the pace of the fight from the opening bell and invested to the body steadily throughout the fight with 51 landed blows. Promoted by notable boxing stalwart Sampson Lewkowicz, the WBA’s No. 11 ranked super bantamweight Nunez was methodical in dismantling the former amateur standout Garnett.

“It was a great performance and I agreed with the judges – I won every round,” said the rising prospect Nunez who made his ShoBox debut. “I feel like I had good defense and an attacking style. He was a good boxer but he never hurt me. I’m ready for whoever my promoter Sampson puts in front of me next.”

Despite giving up the height advantage to Nunez, it was Garnett who was more efficient with his jab with a 46-to-37 edge. Nunez, however, landed 39% of his power punches to claim a clear decision victory.

The animated 27-year-old Eranosyan played up to the Broken Arrow crowd throughout the fight and looked like a seasoned professional in dominating Guerrero, who came out lighting fast winning the first round on all three judges’ scorecards. But it was all Eranosyan from then on as the Miami resident by way of his native country of Georgia outworked and outclassed Houston’s Guerrero, who suffered his first pro loss on ShoBox back in February.

“I am very happy,” said Eranosyan, who is ranked No. 9 by the WBA at 130 pounds and fought for the sixth time in 2021. “This was my first fight on SHOWTIME, but far from my last. I am the best in my division. I was never hurt, and I knew I had won. He was a good fighter, but I am Otar.”

Their output was nearly identical with Eranosyan edging Guerrero by a single thrown punch (585-584) and he was far more efficient throughout the fight landing 42.5 percent (176 of 414) of his power punches on his way to the win.

“There are little things here and there I should have adjusted,” said the 23-year-old Guerrero, a celebrated amateur who won two junior national titles. “Styles make fights and this was one hell of a fight. The better man got the win today. It was a real close decision. I would have given it a draw, if anything. We were both catching each other with good shots. It was a fun fight.

The event was promoted by Salita Promotions in association with Holden Productions, Thompson Boxing and Sampson Boxing. The exciting night of fights will be replayed on Monday, Sept. 27, at 10 p.m. ET/PT on SHOWTIME EXTREME.