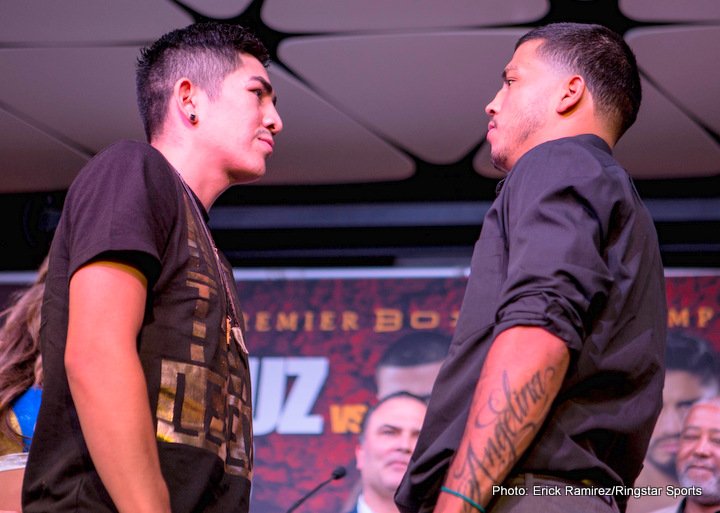 Also in attendance Tuesday was four-time world champion Abner Mares, who takes on Andres Gutierrez as he looks to setup a rematch with Santa Cruz in early 2018. Tickets for the live event, which is promoted by Ringstar Promotions and TGB Promotions, are priced at $30, $50, $75, $100, $150, and $250 and are on sale now. To purchase tickets, visit AXS.com HERE.

“Hopefully I can come out victorious and then face all of the big names. I want to rematch Mares and Carl Frampton then unify the division. I’m going to be ready to face anyone.

“Some fighters when they take long layoffs feel a little bit rusty. I wanted to get in there and test my body and see how I feel heading into the bigger fights in the future.

“Chris Avalos is a tough fighter. He has 20 knockouts so I’m not going to underestimate him. Up there in the ring anything can happen. I’m going to be smart, be patient and do what I have to do to win the fight.

“I’m very happy to be back fighting here in Southern California. I owe all of this to me team and all the fans who make this possible. I love fighting here and I’m going to give you a great show.

“A lot of people think this will be easy for me, but I don’t see it that way. I’ve been in there with him so I know. I’ll never underestimate an opponent. Anyone who gets in that ring with me is dangerous.

“Avalos has good power that I have to be prepared for. I’m really focused on beating him. We both like to come forward so I’m thinking it’s going to be a war.

“If I can get the win, I’m going to rematch Abner Mares. It was a really close fight the first time and I think the fans will really enjoy the rematch, especially now that he’s working with Robert Garcia.”

“I’m not a big talker but I’m ready for this battle. It’s going to be a good fight. This is going to be a war. I like going toe-to-toe and so does he.

“I think fighting close to home is exciting, but it doesn’t matter where the fight is. I think there is certain motivation to do better. I have been working hard in this training camp for this fight.

“My last world title fight I wasn’t really focused. I was running around with the wrong crowd. I am more focused. I stopped talking to everyone I used to. I am a new person. I am a new fighter. Seeing this opportunity in front of me is a blessing. I’m really excited for this fight.

“We did spar in the past and I’ve been wanting to fight him. We aren’t enemies by any means, but it has been forever that I have been waiting for this opportunity.

“I have a lot of tactics on how to fight him strategy wise. It is going to be a good fight and I appreciate they gave me the opportunity.

“We are going to see the best Chris Avalos. I am going to bring the best. It is going to be a fight to remember.”

“Andres Gutierrez is a tough fighter and he’s only got one defeat. He’s no tune-up fight. He’s going to give me a good fight. I’m going to learn a lot and try to make the best of it and put on the best performance that I can.

“Leo and I have two tough opponents in front of us. My opponent was ready to fight Carl Frampton and Richard even said that he thought Gutierrez was going to win that fight. I’ve been training hard for this fight because we all know that young fighters like Gutierrez are warriors.

“I’m excited to be back fighting in Southern California to perform in front of my fans. I think that Robert Garcia brought the best out of me and we’re going to continue to shine on October 14.

“Having the new relationship with Robert Garcia has really changed my career and given me a whole new outlook. It’s made me a better fighter. I’m more mature and I still feel fast and strong.

“I’m excited to show-off a new Abner Mares. I say this before most of my fights but it’s really true. I’m always learning more and you will be able to see it in the ring when I defend my title.

“I’ve been sparring a lot of young guys and it’s got me feeling great in the gym. I can still hang with the 18 and 19-year-olds coming out of the amateurs. So I’m feel rejuvenated heading into this fight.”

“This is a great fight card on October the 14 from StubHub Center in Carson, California. Los Angeles has clearly become the fight capital of the world. Not only do we have several world champions making Los Angeles their home, but we really have some of the best venues and the absolute best fight fans.

“This is a great doubleheader. Double trouble I have been calling it. Two of the most recognized names in the sport. Two Mexican-American world champions defending their world titles. This is going to be a special night for fight fans.

“This is amazing to have these two fights live on a major network like FOX, and also on FOX Deportes. The StubHub Center is nicknamed the “War Grounds” and I really can’t remember a bad fight at the venue. It truly brings out the best of the fighters.”

Let’s play two! Boxing fans will have the rare opportunity to enjoy a boxing doubleheader with two separate live shows on different networks that will showcase five world championship matches from coast to coast on Saturday, October 14 presented by Premier Boxing Champions.

Following that will be a scintillating 154-pound world championship tripleheader on SHOWTIME CHAMPIONSHIP BOXING live on SHOWTIME from Barclays Center in Brooklyn at 10 p.m. ET/7 p.m. PT.

“It’s a common occurrence in Major League Baseball, the NFL and the NBA to be able to watch two or three games back-to-back on the same day, but it is rare in boxing to watch back-to-back live shows from two locations on the same day,” said Tim Smith, VP of Communications for Haymon Boxing. “This is a unique opportunity for boxing fans to watch two separate live cards on two different networks from both U.S. coasts, featuring five world championship matches in the 126-pound and 154-pound division – two of the hottest divisions in boxing. If you’re a boxing fan you’re going to want to get your popcorn ready for October 14.”

All five of the featured championship matches hold major significance in the future for the winners.

If Santa Cruz and Mares win their respective matches, they have both agreed to terms to meet in a highly anticipated rematch and featherweight title consolidation bout in early 2018. Santa Cruz won a hard-fought, narrow decision against Mares in 2015.

The 154-pound title tripleheader features four undefeated boxers and the very best the division has to offer. The winners in each match will face each other in the future to determine which one will eventually be the undisputed 154-pound world champion.