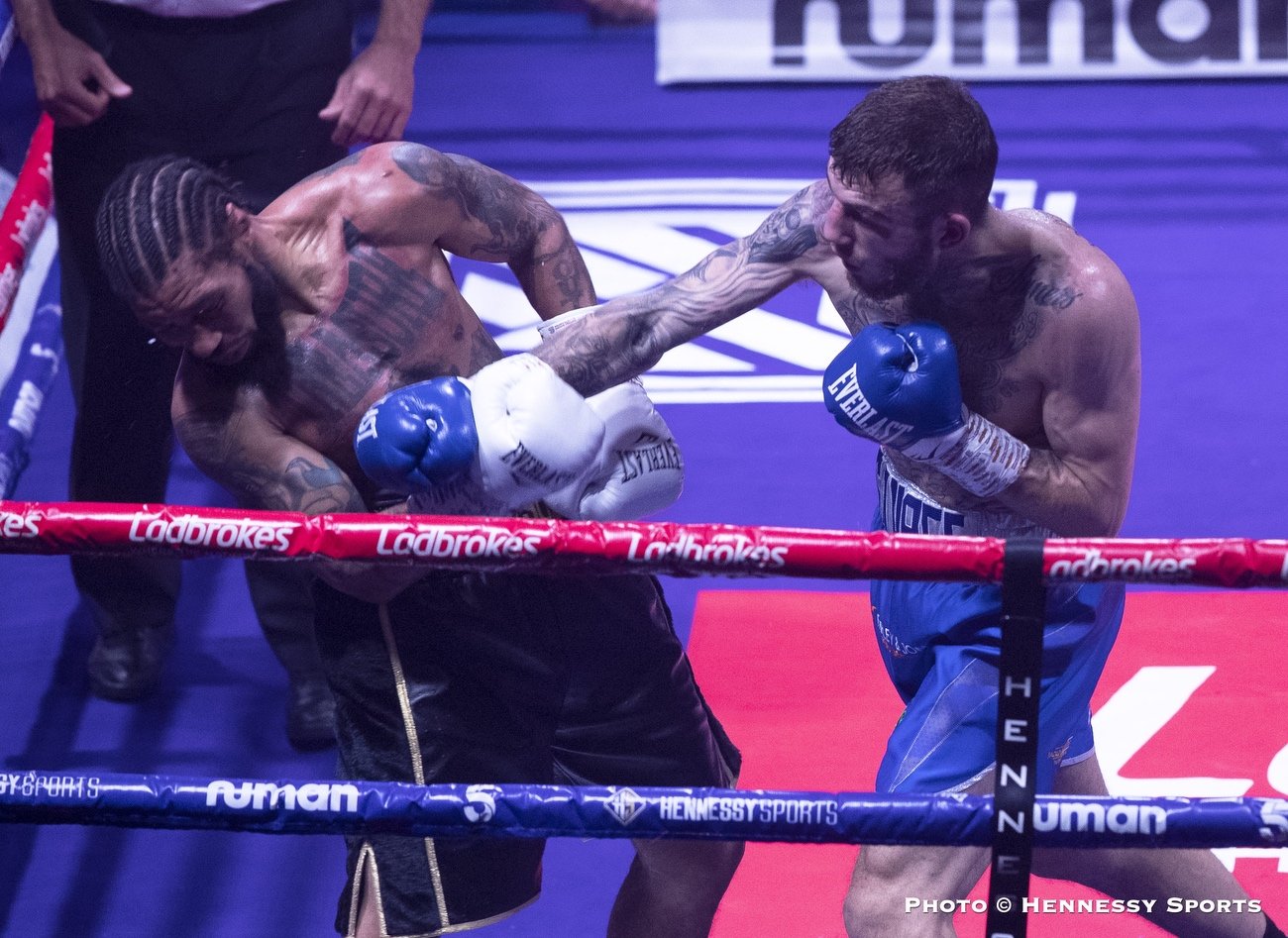 Sam Eggington smashed Ashley Theophane in the sixth round tonight in Redditch with one final body shot to get back on track towards championship contention in 2021.

From the opening bell, Eggington used his size and strength advantage and set a relentless pace to break down Theophane who had some remote success.

Eggington mixed his punches up well throughout the contest from a solid jab to a hard right hand then going downstairs to land some very heavy body shots to slow down the Theophane.

The Birmingham beast kept Theophane trapped in the neutral corner and giving him very little opportunity to escape as he unloaded his big shots.

In the sixth Eggington landed a hard right to Theophane’s ribs under the elbow that dropped the Paddington man. He was up at nine but referee John Latham had seen enough and waved it off at 2:58.

Egginton was coming off a questionable loss to Ted Cheeseman in August, but he firmly put that behind him with his commanding performance tonight and showed that he still has plenty to give.

He said, “I’m over the moon with the result. I felt I was hard done by against Cheesman and I needed to get back with a good win and prove that I’ve got plenty left in the tank.

I know Theophane would be tricky from the start and hard to it. It was hard to get through at first and I just had to keep the pressure on and breaking down and I knew I’d get to him eventually.”

“I’m not shouting anyone out, I’ll fight anyone put in front of me and I can’t wait for a big 2021. I’d like to thank Mick Hennessy and Channel 5, it was a great set up here tonight.”

On the undercard, Brighton heavyweight Tommy Welch, son of the former British and Commonwealth Heavyweight Champion, Scott, made an impressive start to the pro ranks with a second-round stoppage of Matt Gordon in his debut.

Heavy-handed Welch pummelled Gordon in the corner with the referee stepping to halt the onslaught at 2:56.

Hennessy produced some great work with variations to head and body and fast combinations, Arrowsmith stuck with Hennessy and pushed him all the way, but the younger man’s classier work stood out.

Undefeated Monaghan super-welterweight hot-shot Aaron ‘Silencer’ McKenna destroyed the more experience Jordan Grannum in the second round with a perfect left hook to the body.

Although Jordan had not been stopped in 79 fights, he couldn’t handle the power of the hard-hitting 21-year-old who appeared on the show courtesy of his promoter Golden Boy Promotions.

It was the first time McKenna had gone beyond the second round and had to venture into the fifth to get the stoppage against MJ Hall, but the extra rounds will give the 23-year-old talent more ring experience.

Although McKenna set a blistering pace from the opening bell, looking to bomb out Hall with huge shots, he pursued Hall throughout until he got him in the corner and landed some hard shots in the sixth and the referee stepped in.

In the only Championship contest of the evening, Kaisee Hall claimed the Midlands Area Welterweight Championship with a points victory over local rival Ben Fields by a score of 97-95.

Benjamin boxed well showing fast hands and holding the center of the ring, but Fields was pushing the action throughout.