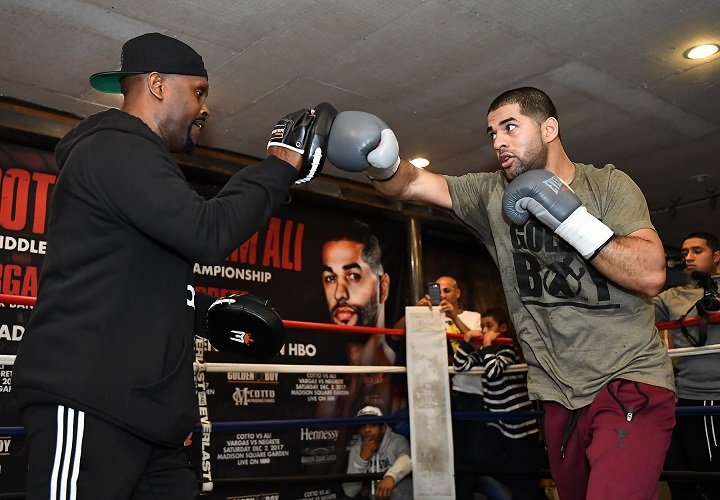 A superstar enters the ring for the final time when HBO Sports presents WORLD CHAMPIONSHIP BOXING: MIGUEL COTTO VS. SADAM ALI AND REY VARGAS VS. OSCAR NEGRETE on SATURDAY, DEC. 2 at 10:00 p.m. (live ET/tape-delayed PT) from Madison Square Garden in New York City, exclusively on HBO. The HBO Sports team will call the action, which will be available in HDTV, closed-captioned for the hearing-impaired and presented in Spanish on HBO Latino.

Fighting for the 24th time on HBO, ring legend and certain Hall of Famer Miguel Cotto (41-5, 33 KOs), from Caguas, Puerto Rico, will take on one last challenger in a 12-round junior middleweight championship showdown before hanging up his gloves after 17 years. The 37-year-old has fought nine times at the Garden before a combined crowd of 140,000 fans, registering an 8-1 record. A four-division, six-time world champion, Cotto has held titles in the super lightweight, welterweight, junior middleweight and middleweight divisions.

Brooklyn-born Sadam Ali (25-1, 14 KOs), 29, looks to spoil Cotto’s retirement celebration and take his 154-pound title. Starting to box at age eight, he’s a two-time New York Golden Gloves winner (2006, 2007) and represented the U.S. in the 2008 Olympic Games before turning pro, going on to win his first 22 fights. Following his only ring loss, in 2016, Ali is on three-bout win streak; defeating Cotto would establish him as a central player in the talented junior middleweight division.

The opening bout is a battle of undefeated boxers, as Rey Vargas (30-0, 22 KOs) from Mexico City takes on Oscar Negrete (17-0, 7 KOs), originally of Tierra Alta, Colombia, in a scheduled 12-round super bantamweight contest. Vargas, 26, who will defend his title for the second time, was last seen on HBO in August with a dominant victory over Ronny Rios. Negrete, 30, who turned pro in 2013, has been on a fast track to a title shot and will be moving up in weight to take on Vargas.

Current WBA International Welterweight Champion Sadam “World Kid” Ali (25-1, 14 KOs) today hosted a media workout at his gym in Brooklyn ahead of his fight against Miguel Cotto (41-5, 33 KOs) for the WBO World Junior Middleweight Championship set for this Saturday, Dec. 2 at the World’s Most Famous Arena, Madison Square Garden, which will be televised live on HBO World Championship Boxing beginning at 10:00 p.m. ET/PT.

Joining Ali at the workout was super lightweight contender Zachary “Zungry” Ochoa (17-1, 7 KOs) who will fight on the Cotto vs. Ali undercard in a six-round super lightweight bout against Erick Martinez (14-9-1, 8 KOs) that will be streamed on RingTV.com

Here is what Ali and Ochoa had to say at the workout:

“I’m really excited to be fighting at MSG against a legend. I know what’s in front on me, and I know what I’m stepping up to. I’m different, I’m a bit of a boxer, I can brawl if I need to, and I have my little tricks.

“My motivation is being on HBO, it being a world title, and my career honestly. People say I didn’t deserve this fight, but they haven’t been paying attention to my career.

“This is my hometown. I grew up here. Cotto is coming to my territory. He’s got power; I need to focus on not getting stuck. I worked a little bit with Danny Jacobs and Curtis Stevens for this fight.

“I want to thank all the fans who are coming to watch my fight! It’ll be a great one!”

“Sadam knows that this is the opportunity of a lifetime. We took the fight knowing what we had to step up to. Sadam’s ready. He’s been ready for a fight like this.”

“I’m so excited to be fighting at MSG. This is a fight for us here in the boroughs, for the Puerto Rican, and Arab community.

“I’m an awkward fighter, and I have a pretty unconventional fight style but I can bang!

“I’m excited to be building myself up again. After my first loss, I’ve been working on all my mistakes. I’ve been able to come back stronger mentally, and I’ve been able to learn from greats like Sadam. We’re good friends, and I’ll be rooting for him.”