Ryan Garcia says former unified lightweight champion Teofimo Lopez is who he’d like to fight next if he can’t get Gervonta ‘Tank’ Davis to agree to fight him at 140.

Attempting to get a fight made with the Top Rank-promoted Teofimo (16-1, 12 KOs) could be just as difficult for the Golden Boy-promoted Kingry Ryan as trying to get a match against Tank Davis. 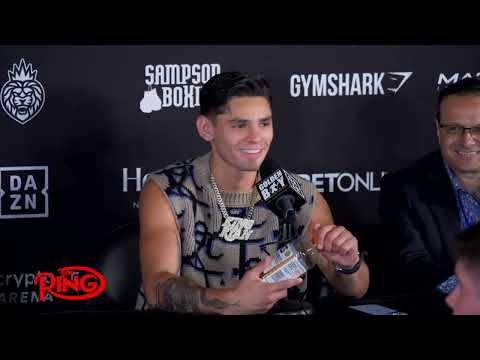 Top Rank is likely going to match Teofimo against another soft touch after he destroys Campa to make sure that he’s mentally come back from his loss to George Kambosos Jr. last November.

Losing to a marginal fighter like Kambosos showed that Teofimo isn’t mentally engaged in the way he needs to be to defeat contenders. Teofimo looked mentally fragile in his loss to Kambosos.

Fortuna hit the deck on three occasions during the fight in rounds four, five, and six.

“I think he’ll be more comfortable at 140,” said Ryan Garcia when asked at the post-fight press conference if Gervonta Davis would be willing to fight him at 140.

“Any jump in weight will probably help him if anything. I’m not looking for a number in particular,” said Ryan Garcia when asked what kind of purse is he looking to get for a fight against Tank Davis.

“I’m sure it’ll be a lot of money. I’m just looking to make the fight happen. I just don’t like that he doesn’t make things clear,” said Ryan when told that Gervonta made a cryptic Tweet on Saturday night following his win over Fortuna, saying, “See y’all at the end of the year.”

“If he’s saying, ‘Seeing you in December,’ let’s make things a little bit clearer. ‘Ryan, let’s get it on. I feel like I’m very transparent with the way that I  talk. I call him out, not because I’m thirsty. I call him out because that’s generally what I want to do.

“We’ll figure it out with the teams, and we’ll make it happen. I want to do this fight for the people, and I know everybody wants this fight to happen. So I’ll be putting my whole heart to try and make this fight.

“I can’t explain it perfectly. That’s something that Lupe [Valencia] and Golden Boy would have to work out,” said Ryan.