Ryan Garcia is already trying to line up a fight in December against Gervonta ‘Tank’ Davis before he’s even taken care of his July 16th main event match against Javier Fortuna on DAZN.

Ryan (22-0, 19 KOs) says he’ll be ready to battle Tank Davis (27-0, 25 KOs) for his WBA ‘regular’ lightweight belt after he beats Fortuna. It seems patently obvious that Ryan is in a big rush to fight Tank, and makes fans suspect that he wants cash-out.

King Ry says he doesn’t want his promoters at Golden Boy Promotions to get in the way of him fighting Tank Davis. As far as Ryan is concerned, he’s ready to face Tank now.

Fortuna (37-3-1, 26 KOs) isn’t the ideal opponent for Ryan to get ready for a fight against a talented star like Tank Davis because the 33-year-old is arguably washed.

Really, this is a non-win type of fight for Ryan because even if he destroys the shop worn Fortuna, he’s not going to get any credit for having done so.

“It’s going to be a great fight. This guy is rugged, he comes after you, so you’ll see a much different fight than [Emmanuel] Tagoe,” said Ryan Garcia to ESNEWS about his July 16th fight on DAZN against Javier Fortuna.

“Now, I think even sooner. I think we could run it in December after I beat Fortuna,” said Ryan about his intentions of fighting Tank Davis in December.

Ideally, it would be better for Ryan to get a few solid wins under his belt against the top ten opposition before facing Tank because he didn’t look great in his last two fights against Emmanuel Tagoe and Luke Campbell.

“Honestly, I think it’s envious and jealousy,” said Ryan when asked why the fans booed him during the Gervonta ‘Tank’ Davis vs. Rolando ‘Rolly’ Romero fight last Saturday night at the Barclays Center in Brooklyn, New York.

“I think Fortuna is going to talk s*** too. I probably won’t understand anyway because of his accent. If there’s a translator, that would be cool,” said Ryan Garcia. 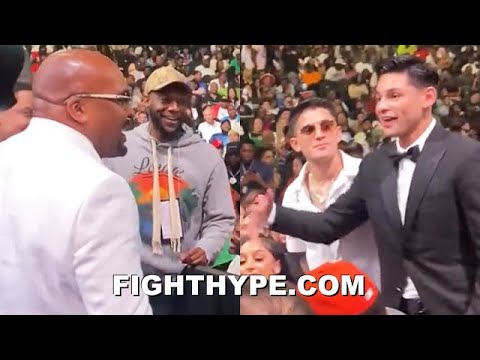