Trainer Joe Goosen rates Emmanuel Tagoe as a “good” fighter but he believes that he’s going to be out of his element against the “unbelievably great” Ryan Garcia this Saturday night in their main event fight on DAZN at the Alamodome in San Antonio, Texas.

There’s a lot of interest from boxing fans to see how good Ryan looks after being out of the ring for a little over a year, dealing with anxiety & injury problems that he’s since taken care of.

Tagoe, 33, doesn’t possess the punching power or the amateur pedigree that Ryan has going for him, which is going to make this contest a tough one for him.

Goosen describes Tagoe as a “slippery fighter,” and he’s going to need to be that way for him to keep from getting nailed by one of Ryan’s big left hooks.

If Ryan can consistently land his left hook during the fight, Tagoe won’t last long under that kind of bombardment. We don’t know how good Tagoe’s chin is, but if he can take Ryan’s best shots, that’ll say a lot about his toughness.

However, Tagoe is going to need to do more than just absorb punishment for 12 rounds on Saturday night for him to win the fight.

To date, Tagoe’s best win is a narrow 10 round majority decision over Mason Menard in November 2020. That fight showed that Tagoe has very little pop in his punches.

Menard is a fighter that Teofimo Lopez knocked out in the first round in 2018, and Christian Tapia stopped in two rounds last July.

“I’ve said it before. I haven’t really heard of Tagoe in a sense where, I know he’s ranked #9 or #10, and that’s a good thing, but what I do know is my son,” said Henry Garcia to ESNEWS about Saturday night’s important return fight by Ryan Garcia against Emmanuel Tagoe.

“Whenever you fight my son, you’re going to get something that is going to surprise you or shock you because my son is the real deal, he’s out to win, and he’s out to knock people out. That’s just something he does,” said Garcia.

“Emmanuel Tagoe, he’s a slippery guy. He’s got that many wins for a reason,” said trainer Joe Goosen to ESNEWS. “I don’t care if you’re fighting your grandmother.

“If you have that many wins and that type of record, you’re winning and that gives you confidence in yourself. He’s probably working really hard, if they’re smart, they’re working hard and I think they are,” Goosen said about the 33-year-old Tagoe.

“He’s training in Florida. They got out here in time, they’re working hard, and he probably has a game plan. I’ve watched film on Emmanuel, he’s good, but when I describe Ryan, I don’t use the word ‘good.’

“I use ‘unbelievably great.’ To me, that’s what you’ve got in the ring. A really good guy [Tagoe] against a really, really great guy [Ryan Garcia], and that gives me confidence in the outcome of this fight for Ryan,” said Goosen. 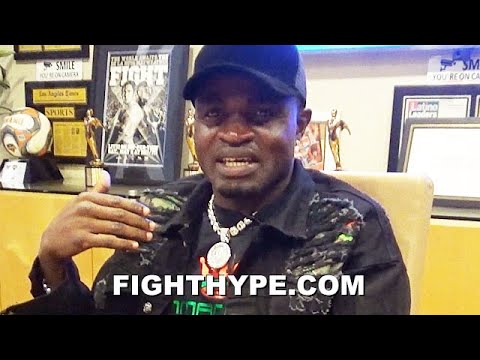