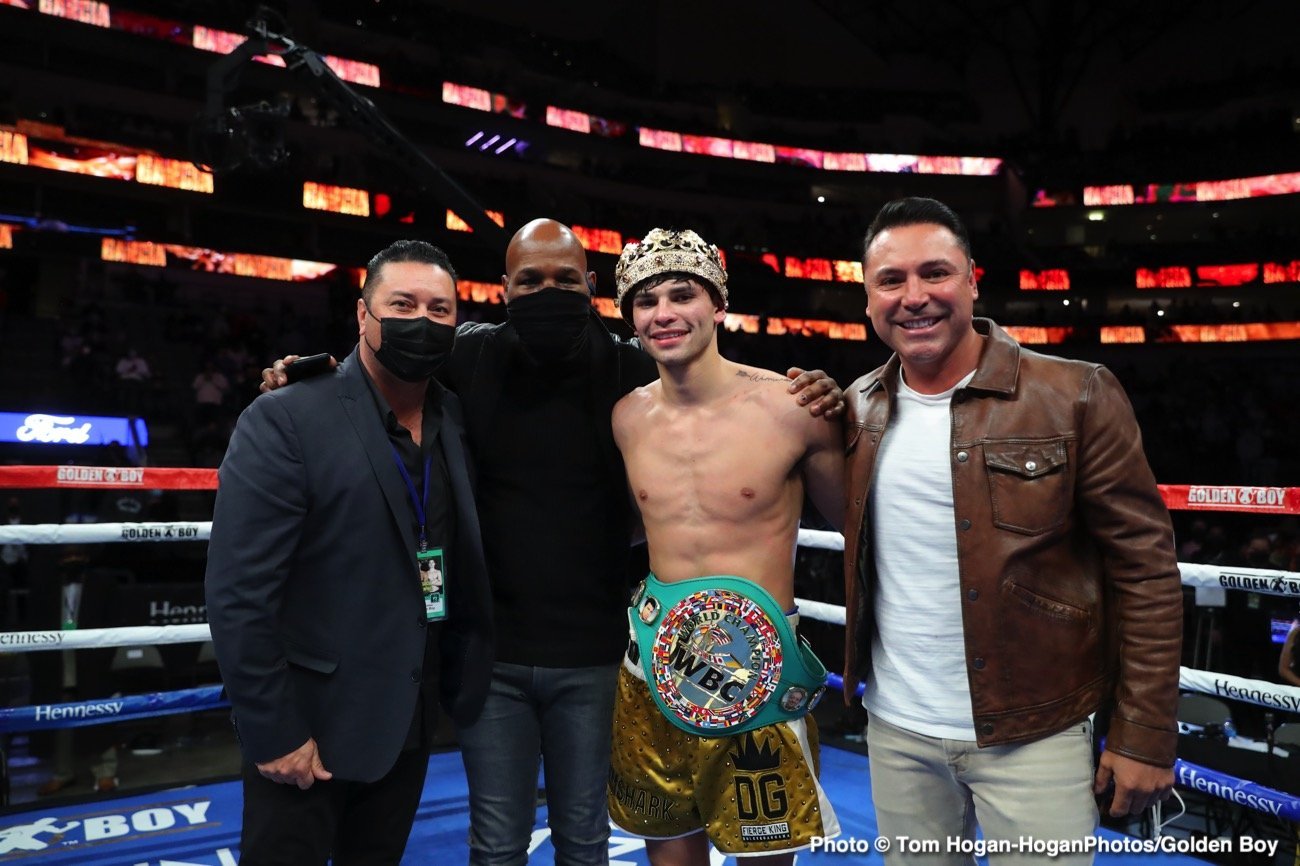 Ryan Garcia predicts a KO win over Isaac Cruz when he returns from a long layoff. This would be an excellent opportunity for Ryan to show what he can do against a tough fighter that many boxing fans had beating Gervonta ‘Tank’ Davis earlier this month on December 5th.

The former WBC interim lightweight champion ‘King Ry’ Garcia (21-0, 18 KOs) is interested in fighting ‘Pitbull’ Cruz (22-2-1, 15 KOs) after the former world title challenger said he’d be willing to fight him in his backyard.

Cruz, 23, showed a good chin in taking some big shots from Tank Davis in losing a close 12 round unanimous decision. However, Tank fought with an injured left hand from the fifth round and was forced to fight one-handed in the second half of the bout.

“He lets his hand go to the body, and I think he chipped his head. He kind of cringed, and he never let his left go after that.

“I think he was having trouble with the style [of Isaac Cruz]. I don’t think he liked it, and I think he gave him too much respect.

“I learned a lot too hearing all the things I had to hear this year with people trying to claim all this stuff about how I like to pull out of fights, and I’m an IG [Instagram] fighter.

“I kind of heard that my entire career, and I had to adjust to knowing who I am and knowing my truth. I’ve been boxing since I was seven years old. I’ve never been fearful of fighting anybody.

“I fought in the best weight class in my amateur years, and I fought every year of my life. This is the first year I didn’t fight. So for me, I didn’t take those claims seriously, and I never let it get to my head.

“I was confident in myself, and I had a great victory this year. If you think about it, it was this year,” said Ryan Garcia on his fight with Luke Campbell.

“I fought Luke Campbell, and I was explosive in the fight. I didn’t really lose any rounds besides the second round,” Ryan said about Campbell dropping him in round two. “I got right back up and knocked the guy out [in the seventh].

“I have gel in my hair because I’m going to my sister’s birth after this. See, these are the things people say that I don’t understand.

It will be an impressive statement by Ryan Garcia if he scores a knockout of Pitbull Cruz because Tank never had the tough Mexican hurt for an instant.

“People get dropped sometimes. Why is everybody tripping on it?” said Ryan Garcia on being reminded that Luke Campell knocked him down last January.

“That’s what I don’t understand. Everybody is, ‘Oh, you got dropped.’ Okay, you’re right, and so has many other fighters. Some even earlier in their careers. For example, Oscar De La Hoya.

“Are you going to get on Floyd for being dropped by Zab Judah, which he did get dropped by a check hook? Will you get on him about that? No, because he got back up and knocked him out.

“People get dropped all the time. In streetfights, they get dropped and get back up and win. If I were an IG fighter, I would have got dropped and embarrassed. This shows that I got more heart than you think.

“I didn’t hold, didn’t move, and said, ‘Okay, let’s run it,’ so that proves my point. Anybody else that says anything else is hating, that’s it. I know what I got, and I know what I can do.

“I’m not even there yet. I’ve got to keep studying, studying, and studying and keep improving every day,” said Ryan Garcia.

It’s unlikely that Ryan can even get a fight against Tank Davis at this point, given how he backed out last time when the two were supposed to fight. But it’s still possible, though, as long as Ryan makes a good showing in his comeback fight in 2022.

A decisive win over Pittbull Cruz might be all Ryan needs to land a big payday fight against Gervonta in 2022.

Of course, a fight against undisputed lightweight champion George Kambosos Jr. would also be an excellent door opener for King Ryan to earn a title shot against Tank Davis.

Kambosos (20-0, 10 KOs) included Ryan’s name among the four lightweights that he’s looking to potentially face when he makes his first defense of his titles in early 2022.