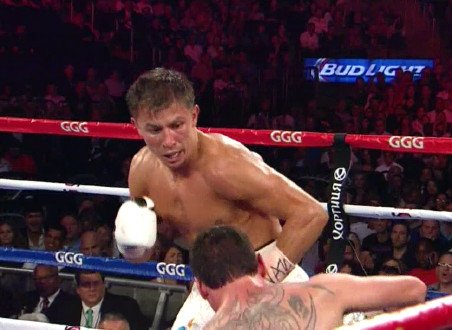 Garcia says Golovkin can be hit due to his come forward style of fighting, and that’s something that the hard hitting Rubio can take advantage of with his power.

“Fight smart, keep his eyes open, and don’t go in there afraid,” Garcia said to esnewsreporting in explaining how Rubio will beat Golovkin. “We know Triple-G. Everyone knows he’s knocked out his last 17 opponents. He’s very dangerous, but there’s a lot of things we’ve seen in his fights. He’s not a perfect fighter.”

Rubio is usually the type that comes forward looking to slug it out with his opponents. If Rubio is going to be fighting smart and careful, he may have problems winning rounds, because he doesn’t have the hand speed that Golovkin has. He’s not going to be able to out-box Golovkin. The only way Rubio wins this fight is if he knocks Golovkin out, and the best way to do that is to go after him the way that Kassim Ouma did in their fight in 2010. Golovkin won that fight, but Ouma gave Golovkin all kinds of problems.

“If it was his power with the style of Manny Pacquiao or Floyd Mayweather Jr or Mikey, those type of styles. But he comes forward, and he gets hit,” Garcia said. “Somebody that’s big, and strong and can punch also [will beat Golovkin]. We’re not going to say it’s going to be easy. We’re going to pull an upset and make a statement. It’s going to be a lot of people there that want to see the fight ‘Mexican style,’” Garcia said.

This fight card is one of the better ones this year. WBA Super World featherweight champion Nonito Donaire (33-2, 21 KOs) will be facing one of his more dangerous opponents in unbeaten Nicholas Walters (24-0, 20 KOs) in a fight that you have to see as a 50-50 affair. A younger Donaire would have to be favored, but not the 31-year-old Donaire that exists now. He’s going to have a tough time against the younger Walters, and we very well could see Donaire get knocked out for the first time in his career.

Super middleweight Edwin Rodriguez (17-0, 9 KOs) will be fighting Azea Augustama (17-1, 9 KOs) in a 10 round fight. Rodriguez hasn’t fought since last year in November when he was beaten by Andre Ward by a 12 round decision.