Unified WBC, WBA and IBF Super Welterweight World Champion Jermell Charlo and unbeaten, two-time super middleweight world champion David Benavidez, held court in the same ballroom and answered questions from media about their upcoming fights on SHOWTIME during separate media roundtables inside the Live! By Loews Hotel from Arlington, Texas. Sitting to their right was Stephen Espinoza, President, Sports and Event Programming, Showtime Networks Inc., who offered his thoughts during an intriguing and wide-ranging discussion involving two of the most talented fighters today.

“I want to knock this guy out. This is the Jermell from earlier, back when I was trying to end fights. I want to be that guy for 12 rounds now,” – Charlo

On Saturday, May 14, Charlo and WBO World Champion Brian Castaño will meet in a rematch of one of 2021’s most significant fights as they again seek to become the first ever undisputed 154-pound champion in the four-belt era live on SHOWTIME from Dignity Health Sports Park in Carson, Calif., headlining a Premier Boxing Champions event.

Tickets for the live event, which is promoted by TGB Promotions and Lions Only Promotions, are on sale now and can be purchased through AXS.com. Ennis vs. Clayton is promoted in association with D&D Boxing.

Here’s what the roundtable participants had to say on Saturday:

On not leaving the rematch in the judge’s hands:

“I want to knock this guy out. This is the Jermell from earlier, back when I was fighting four-rounders and I was trying to end those fights. I want to be that guy for 12 rounds now.”

On becoming undisputed at 154:

“This is one of the achievements a fighter can have – to fight to be undisputed, so I’m going to enjoy this moment and I’m going to have fun when I’m in there on May 14, five days before my birthday. I’m ready to win this fight impressively. I make all of my former opponent somebody – Tony Harrison, Lubin, all these fighters who fought me before. Nobody knew who Brian Castaño was before I fought him. And I hope I get the judges who really understand boxing. Everyone is used to me knocking everyone out that when I don’t knock someone out, it’s an issue. This is a skillful sport, you have to pay the bills for this.”

A different Charlo this time around:

“I’m locked in a little bit different this time. I’m more dedicated than I’ve ever been. I’m hungrier. I don’t know what’s next after this opportunity in my life and I’m glad that God gave me the opportunity to face the same guy and just put on a better performance. This is about me being the best Jermell Charlo.

“I was having back spasms (in his preparation for the last fight). I want to say that I came into this camp doing things the old school way now. At first, I was being superstar Jermell Charlo. I put that aside and now this is about me digging deeper into the Jermell Charlo that I really am and testing myself with my training and swimming, running, stuff that I went away from because of the stardom before.”

On fighting the winner of Spence-Crawford:

“I have no intention on fighting my stablemate (Spence). Terence Crawford can get that work. I don’t care about him. I don’t know him, and he doesn’t know me. We can make it happen. But when you have an emotional tie to someone, it’s like fighting my twin brother. Now like Spence said, if that money is right, and you put that brick bread out there, we’re going to get in there with anybody. We’re not going to turn down anyone, neither will Spence. But Crawford hasn’t done anything at 154. How do you want him to fight me? I’m trying to become undisputed right now. How are we talking about someone who hasn’t even fought in the division? How did he just jump from there to there? What connection does he have?”

“Once the story is written and the book is finished, everyone’s going to come back and say that Jermell Charlo did a really good job at 154. I held it down. I’m proud of what I’ve done in the division, but I have to get Castaño out of the way. I have to show all the fans why I’m the No. 1 guy that’s been the No. 1 guy for so many years. I possess a different type of strength. I have a different type of power when I punch. I’m the Hagler and Hearns put together and I have 12 rounds to do it.”

Hall of Fame bound if he beats Castaño?

“I might get an opportunity to make a move in my life like that. That’s what’s important. What’s important is leaving a legacy and I want to leave a legacy for my children and it’s not about right now. The legacy is for the future so I’m writing my book and if I don’t get the eyes and the viewers, that’s ok. I’m not begging to be the most popular boxer. I’m just doing this for my future.”

On criticism he stayed on the ropes too much in the first fight:

“In boxing sometimes, you have to fight off the ropes. Yeah, I could have done better by not being on the ropes. But I fought myself off the ropes. Who got hurt more? Who got buckled? To me, I want all the action. At the end of the day, maybe I won’t be on the ropes that much and get back into the center of the ring. He didn’t throw as many punches as he usually does against me. Why? Because he got hurt. The fight would have ended if he had thrown more punches. I’m going to smash him this time around.”

“I want to go back to something about what ‘Mell said about appreciating him while he’s here, and that really resonated with me, and I hope it resonates with you because the sport of boxing needs boxers like Jermell Charlo. Not just in the ring – being passionate and athletic, putting on a show and entertaining people. But also doing things like this, outside of the ring. People are always saying, ‘We need personalities in this sport. We need larger than life characters.’ We have one here. We have a larger-than-life person in the ring and outside of the ring and I hear people say, “He’s angry, he’s this, he’s that.’ That is passion. What you’re hearing is not anger. It’s passion and a commitment to the sport, and I think Jermell is the kind of fighter that, when he’s gone, I think there will be a greater appreciation for him, and I think we need to appreciate him when he’s here because fighters like Jermell are critical to the health of the sport. They draw people in. They impress people in the ring. They attract eyeballs outside of the ring. You guys see it.”

“David Lemieux (is) basically tailormade for my style to go in there and stop him. But it’s not going to be easy…It’s going to be a fun fight.” – Benavidez

On Saturday, May 21, Benavídez will face former world champion David Lemieux in a 12-round showdown for the vacant Interim WBC Super Middleweight Title headlining live on SHOWTIME from Gila River Arena in Glendale, Arizona in a Premier Boxing Champions event.

Tickets for the live event, which is promoted by Sampson Boxing and TGB Promotions, are on sale now and are available for purchase through Ticketmaster.com at the link HERE.

Here is what the roundtable participants had to say Saturday:

On his aggressive style:

“Every fight I go into, I either want to get a knockout or a stoppage. I think I have five straight stoppages since I came back from my suspension. That’s the plan. I want to go in there and I don’t want to leave any doubt. The stoppage is always the main thing I go for.”

“With the style that David Lemieux has, it’s basically tailormade for my style to go in there and stop him. But it’s not going to be easy. David Lemieux is really motivated too. He’s fighting for another title just like I am. He’s a big puncher. I’m going in there and I’m looking forward to it. It’s going to be a fun fight.

“As one of the best super middleweights in the world, you have to work around your opponents not trying to exchange with you. You have to learn how to deal with adversity. I don’t want to be like Edgar Berlanga who says I didn’t knock this guy out because he was running from me the whole fight. You’re going to get people that run from you the whole fight. It’s up to you to figure that out and try to knock them out.”

On moving up to light heavyweight:

“I feel like, besides Caleb Plant or Jermall Charlo, Demetrius Andrade is the only other fight that makes sense. These other fighters I want are Caleb Plant, Jermall Charlo and even Edgar Berlanga. And if not, I think it might be time to go up to 175 pounds. I’ve been trying to make all these fights happen for a long time. I feel like right now, when I win the WBC interim title, I’ll have a little bit more leverage. But if I can’t make them happen, it’s because the fighters don’t want to make the fight with me happen.

“To be honest, right now I’m kind of forgetting about a Canelo fight because he’s over there doing his thing. He’s going to fight Bivol and then Golovkin. So, I feel like I have to take this route and fight everybody over here. At the end of the day, that’s going to give me the experience I need. Canelo is where he’s at because he has experience. He’s fought a lot of great fighters, so if I go the same route and fight all these great fighters and beat them, then I’ll have enough experience to go in there and have the confidence to beat Canelo.”

“I hope Caleb Plant is serious about fighting in the second half of the year. I’m serious. We’ve let this fight marinate as long as possible. Now it’s going to be an even better position because once I get the WBC interim title against David Lemieux, there will be no excuse not to fight me. He said he wants the rematch with Canelo. Well, this is the best step to do it.”

On fighting in his home state of Arizona:

“I think fighting in Arizona again is going to be even better than last time. This time, it’s for the WBC interim title. A title fight against another great ex-champion. People out there love me. I have a lot of fans and supporters in Arizona. I’m excited. A lot of people are going to be there and I’m definitely going to put on a show.”

On a Benavidez vs. Plant matchup:

“It makes sense. I think one thing that the pandemic reminded everybody is that it can be taken away at any minute. This could all disappear. I don’t think it’s a coincidence that coming out of the pandemic, we have had no issue making tough fights. If you look at our schedule, it’s all tough fights. Nobody is getting easy fights. I do think that this has had an effect on people. These are fights that need to be made. Life is short, so let’s do it.” 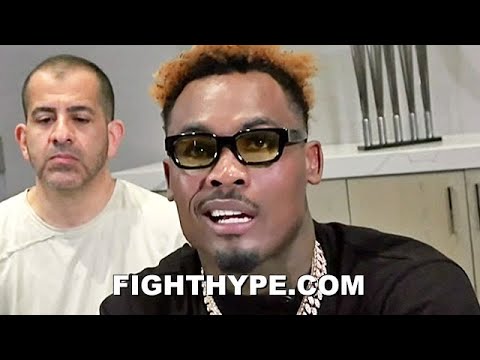