Lightweight champion Rolando ‘Rolly’Romero says Caleb ‘Sweethands’ Plant can beat Canelo Alvarez in their fight on November 6trh, but he questions whether the judges will give him the decision.

Rolly believes IBF super middleweight champion Plant (21-0, 12 KOs) can win seven rounds against Canelo and should be given a win but WON’T. Canelo (56-1-2, 38 KOs) has proven to be impossible to beat by a decision since 2014.

Canelo and Plant will be headlining on Showtime PPV at the MGM Grand Garden Arena in Las Vegas. The two fighters will be battling for the undisputed super middleweight championship.

Canelo will have his WBA, WBC & WBO belts available while Plant will be risking his IBF title. The winner will be the new four-belt undisputed champion at 168.

‘Sweethands’ Plant and Canelo will be meeting a grudge next month, and it should be exciting for fans. Canelo already drew first blood by nailing Plant with a shot during their face-off last week in their Los Angeles press conference.

After Plant called Canelo a “drug cheat,” the Mexican star got riled up and pushed him.

Plant answered back with a left hook slap to the face of Canelo, but immediately the Mexicans star tagged him with a counter right. Ths shot cut Plant under his right eye and angered the Tennessean.

“Caleb is going to come conditioned for that fight for sure. I know what [strength coach] Larry [Wade] can do,” said Rolly Romero to Fighthype.

“Caleb is a really smart fighter with a great ring IQ. I mean, to beat Canelo is very difficult, but Canelo has struggled against boxers in the past.

“He [Plant can win seven rounds, he can definitely win half the fight, but are they going to give him the fight?

“He can outbox Canelo, but are they really going to give it to him? That’s the best edge I can give Caleb as far as that goes. A rematch is going to sell a lot.

Plant can stand up  to Canelo’s body shots

“He’s white, he’s a white world champion, and they’re going to get behind that. That’s good, and it’s very marketable, and that’s what boxing has needed for a while now. So that’s the edge [for Plant].

“If it goes to a decision, I don’t think they’ll give it to Caleb; I really don’t.

“Yeah,” said Rolly when asked if Plant will be able to hold up to the body shots from Canelo. “Larry is a great strength & conditioning coach. Larry knows what the hell he’s doing. Have you ever seen Porter tired? Never,” said Romero.

“Like I said, Caleb has a very high ring IQ. 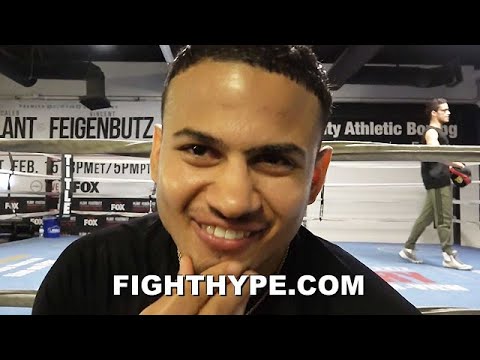