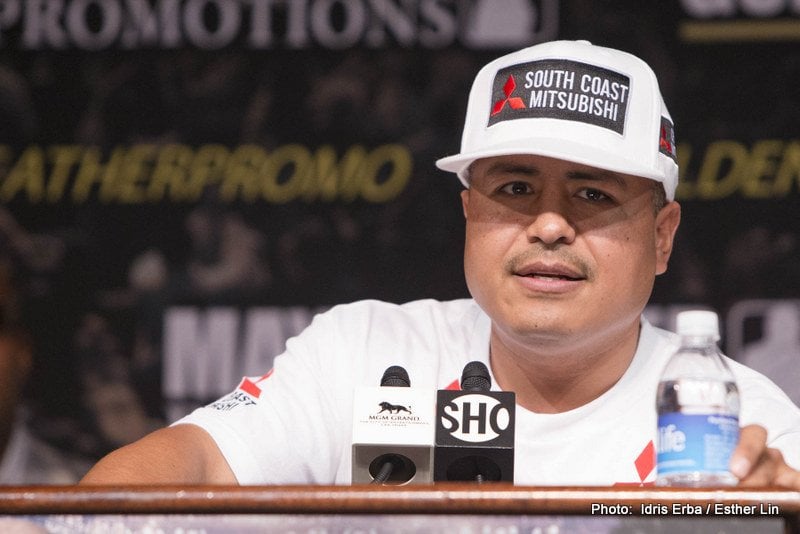 If trainer Robert Garcia is to be believed, then the proposed Kell Brook v Brandon Rios dust-up could have hit the skids already. The proposed fight for the Brit’s IBF 147 lb title is ostensibly on course for August 29th in Sheffield – and all the noises from Rios himself and both Matchroom Sport and Top Rank have been positive thus far as negotiating the fight goes.

So it’s probably a good job that Brandon’s trainer Robert Garcia isn’t in charge of making it happen, as following his disappointing trip to England 10 days ago, in which his fighter Evgeny Gradovich dropped his IBF 126 lb strap to Lee Selby , the Oxnard based trainer has spoken to fighthubtv to accuse Brook’s handlers – Eddie Hearn & Matchroom Sport – of diva-ish behavior saying that from his experience of dealing with them things weren’t positive.

Asked if he had a chance to chat with Hearn on his UK trip, Garcia said;

“Yes, yes we did and things weren’t positive. He said ‘you’re boy wants too much money’. Motherf*****, you’re bringing us to your home town, you gotta pay us! And then, another thing they said was they not gonna let us use the MX – Everlast gloves – ’cause they think they’re Mayweather! – But it, it wasn’t positive.”

Garcia, thankfully, is a very experienced man who knows the game – and having occupied the position of world championship level fighter himself, is well aware of his exactly what his own role is here and just who sorts out what in boxing.

“I’m gonna let them work it out. (Rios’ manager) Cameron Dunkin’s gonna do his best to get Brandon the best payday and one of the things is gonna be the gloves too, ’cause that’s the gloves we’ve always use.”

Sadly for Garcia, the issue is less to do with Team Brook thinking they’re the Mayweather’s and more to do with the British Board of Control, though Garcia insinuates that they (gloves) are to be banned because of Eddie Hearn. Something of a stretch and open to interpretation.

“From what Eddie (Hearn) told me last night – I had a good talk with him – he called the Commission in England (BBBoC) and I think they are gonna ban those gloves. So, I don’t think we’re gonna be able to wear them. That’s what I think.”

You can give me a shout on Twitter @Undilutedpoison