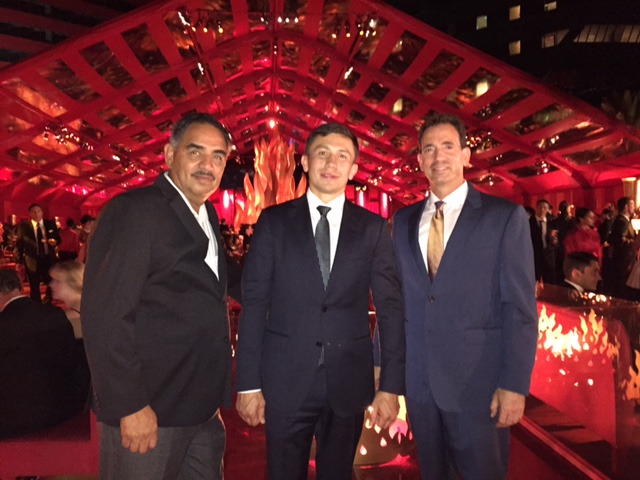 Boxing superstar GENNADY “GGG” GOLOVKIN was a huge hit Sunday night at the 2015 Emmy Awards where numerous celebrities and international stars greeted him and wished him well in his upcoming fight.

Among the well-wishers was Dave Grohl, leader of the Foo Fighters who was in attendance on behalf of their outstanding HBO Documentary Series, “Sonic Highways.”

“It was great to meet Dave in person and I look forward to seeing the Foo Fighters in one of their upcoming concerts,” said Golovkin.

Golovkin was joined on the red carpet with Hall of Fame ring announcer Michael Buffer who will be announcing his upcoming fight.

Golovkin attended the 2015 Emmy Awards with his renowned trainer Abel Sanchez and his promoter Tom Loeffler.

HBO Boxing presents “Road to Golovkin/Lemieux,” an exhilarating special examining the upcoming middleweight unification fight between title-holders Gennady Golovkin and David Lemieux. In a highly anticipated 160-pound showdown set for the big stage at Madison Square Garden in New York on Saturday, Oct. 17, Golovkin and Lemieux will finally meet in the ring. The encounter will be televised live on HBO Pay-Per-View ®.

The “Road to Golovkin/Lemieux” special will premiere Saturday, Oct. 3 at 12:15 a.m.(ET/PT) on HBO immediately following a live HBO Boxing After Dark® card from Carson, CA. It will preview the powerhouse meeting between two accomplished ring warriors who have been on a journey to confront each other in the ring. The special will provide all-new content including portraits of both fighters’ path to this significant fall showdown.

Golovkin, who has been spectacular since his U.S. debut in 2012, brings a perfect 33-0 record with 30 KOs into the confrontation. He has knocked out his last 20 opponents and become one the sport’s top attractions. Montreal’s Lemieux sports a sterling record of 34-2 with 31 KOs and possesses the style of fighting and punching power that makes this fight one of the most anticipated boxing events of the year.

The special will also be available on the HBO On Demand® service, HBO NOW, HBO GO® and at www.hbo.com/boxing as well as various other new media platforms that distribute the series.

All times are ET/PT.