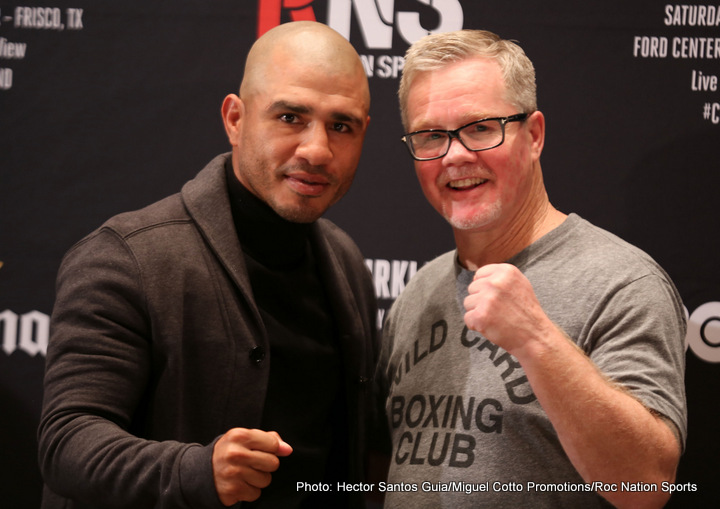 Puerto Rican legend Miguel Cotto says he “rested a lot, healed” and is now “ready to fight” against vulnerable but dangerous slugger James Kirkland on February 25, and Cotto has also vowed to retire from boxing this year. A great career will come to an end, but the Kirkland fight aside, fans are asking who Cotto will fight in his final ring appearances.

Michael Yormark, the co-promoter of Cotto-Kirkland – dubbed “The Return” and going out on HBO p-p-v for $49.95 – told the media at the final pre-fight presser how sales have “exceeded our expectations,” and that fans will get a “brawl” that will be “action packed.” This may well be the case, but Cotto is a huge favourite to win and the four-weight champion is talking about bigger fights in which to see out his Hall of Fame career.

Cotto, along with his trainer Freddie Roach, believes, still, that he deserved the decision over Canelo Alvarez in November of 2015. Cotto has made it clear he would very much like a rematch to take place before he walks away. Roach, too, likes the idea. Freddie also had something interesting to say about Cotto’s reasonably close decision loss to Floyd Mayweather from 2012.

“Obviously, I thought Miguel won his last fight. A rematch would be great there,” Roach said as quoted by RingTV.com. “Miguel always tells me if I was in his corner when he fought Mayweather, we would have won. What’s next? Who knows? But right now we have a tough guy in front of us and we’re getting ready for that fight. Miguel in just the past two days has been great. We dusted off the body bag. Body punches are hard. Yes, I peed blood last night.”

So both Cotto and his trainer feel he has plenty left at age 37. Will a rematch with Canelo take place? It seems doubtful – and fans have only one man in mind when it comes to Canelo’s next big fight: Gennady Golovkin – but you never know. As to the Mayweather fight in May of 2012 – could Roach have dragged more out of his fighter, enough to have managed a win over “Money?” This question of course has no definite answer.

Cotto will beat Kirkland, on that seemingly everyone outside of Team-Kirkland agrees (Team-Kirkland now including trainer Ann Wolfe, with whom Kirkland has wisely reunited) – but then what? Even Roach isn’t sure.