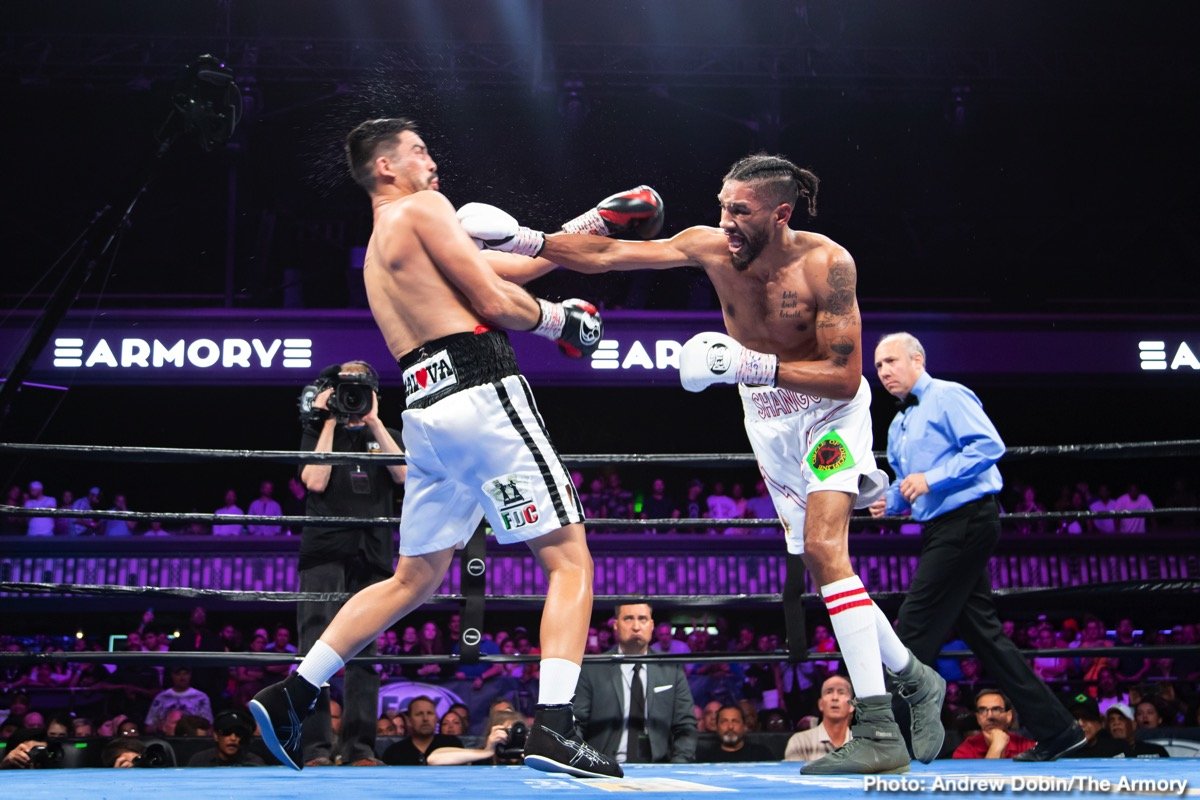 Jamal ‘Shango’ James ignited The Armory in his backyard of Minneapolis with a hard-earned victory over former titlist Antonio Demarco. With the win James moves one step closer to his dream of fighting for a world title maybe even in his hometown. Next week on the Pacquiao/Thurman FOX PPV, Sergey Lipinets and John Molina Jr. go to war and the winner will likely face James for a secondary WBA welterweight belt. Jamal James started the opening round throwing quick combos and then wisely resetting. A round later a full on brawl in close corners broke out that Demarco got the better of even as the hometown kid responded late. Splitting the early rounds in the 3rd James fought in a more measured approach leading with his jab, landing short rights up top while putting in work to the body as well.

In and out on offense by James in the 4th was enough but Demarco was able duck down and counter over the top at times. A huge right hand early by James, led to both men attacking downstairs as the pair trade punches all the way to the bell in the 5th. More inside action in the 6th, Demarco’s best punch all night was right hand to the body and short counters over James’s jab. The 7th round was one of the better two-way rounds this year. In rounds 8 and 9, James was in control pivoting nicely while scoring with solid shots. These two warriors laid it all on the line down the stretch bringing the partisan Armory to their feet. The official scorecards were 98-82 for all three judges in favor of Jamal James.

After the victory, Jamal explained, “I listen to my corner and adjusted when I had to adjust”. Adding “It was electric in here, there’s no better place to fight than The Armory in Minneapolis you can tell watching it on TV.” The official attendance for the event was 3,170.

Heavyweights Robert Helenius and Gerald Washington fought at a better-than-expected pace with Helenius narrowly nicking the first two rounds mainly landing left hooks. Washington strung two rounds together but it was Helenius using a steady jab while mixing in right hands to make it around 4-2 after 6 rounds. In the 8th Washington landed a huge right hand that crumbled Helenius to the canvas as the back of his head balanced on the lowest rope.

Also, heavyweight contender Charles Martin defeated Daniel Martz using lunging lefts hands in a very close first round. Martz closed stronger with a couple of clean lands to steal the second. In round fourth Martin landed several punches in the opening minute scoring two knockdowns which ended the action. It appears Martin is being lined up for Gerald Washington to close out the year.

In the FS1 prelims, Bryant Perrella versus Domonique Dolton had a slow start as it turned out a late land by Perrella sealed the round. Left hands by Perrella early in the second and just as Dolton answered back he seemed stunned getting caught with overhand lefts on the ropes in separate flurries. Perrella threw three upper cuts, leading to around 15-20 straight punches forcing referee Gary Miezwa to stop the fight in the third.

The first prelim bout matched rising bantamweight prospect Antonio Russell now 15-0 against Francisco Pedroza. Rounds 2 and 3 saw several exchanges with the harder shots favoring Russell mainly the hooks with both hands especially the left. Russell continued to keep an active jab for most of the bout. The fifth frame was action-packed out of the gate as they took turns attacking the body and head. The left upper cut in the pocket by Russell was very effective. All and all it was a good 10-round test for a prospect in need of rounds.

Non-Televised Bouts: 2016 Olympic qualifier Karlos Balderas Jr. cruised to a 7th round TKO moving his record to a perfect 9-0. Balderas Jr. showed good timing and was sharp with his punches as he pushed forward bringing the fight to Robert Frankel. Marcos Hernandez got an easy win over Javier Castru and the now 10-0 (8Ko’s) Brandon Glanton sporting the American trunks, won via second round stoppage after Eric Abraham’s corner threw in the towel. Unbeaten heavyweight Frank Sanchez won on a technical stoppage knocking Jason Bergman through the ropes and Minneapolis native Voshean Owens won in a good scrap.