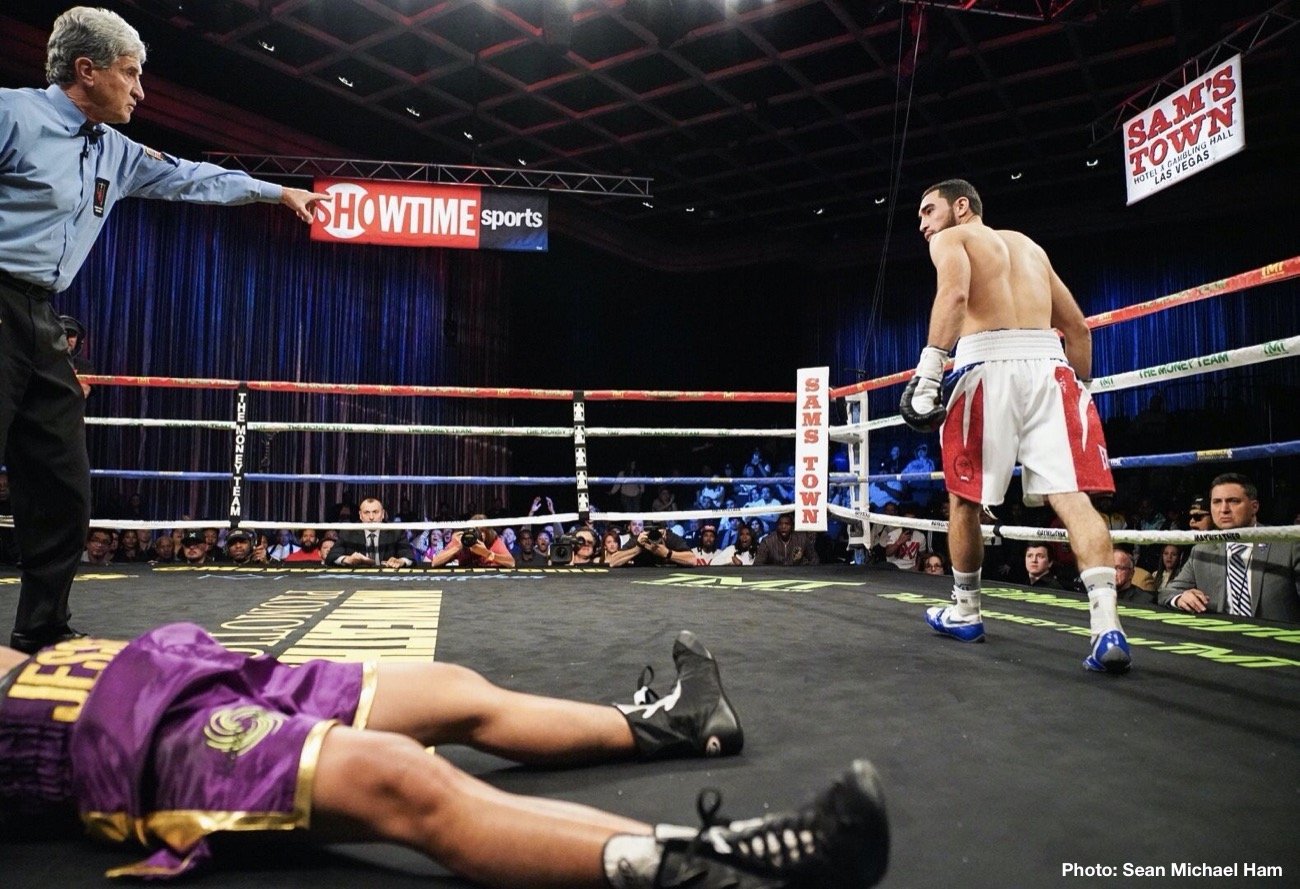 Undefeated super featherweight prospect Xavier Martinez thrilled a sold-out crowd and boxing royalty at Sam’s Town Live with one of the quickest knockouts in ShoBox: The New Generation history in the main event Friday night in Las Vegas.

It took just 21 seconds for Sacramento’s Martinez (15-0, 11 KOs) to steal the show, connecting on a solid jab with his left hand before a glancing right hand finished the job and sent Filipino Jessie Cris Rosales (22-4-1, 10 KOs) down and out in a knockout of the year candidate. Rosales’ head hit hard on the canvas and his body was left sprawled on the floor.

Martinez has now scored knockouts in seven consecutive fights, including a third-round stoppage of John Vicente Moralde in his ShoBox debut in April.

“I wanted to steal the show,” said Martinez. “[Rolando Romero] did his thing and I knew I had to capitalize on that. I did it in half the time (45 seconds). Everyone did great tonight. Hitchins and Kevin [Newman] both did their thing and I had to follow.

“I’m going to get back in the gym and continue grinding. I want to be the best. I have the best team in boxing right now. As long as they keep lining them up, I’m going to keep knocking them down.”

Hitchins, who represented his parents’ home country of Haiti in the 2016 Rio Games, used his skill, speed and defense to edge the 27-year-old Johnson. Hitchins was marginally better in every category round after round, allowing him to build small but decisive leads en route to the unanimous decision. Johnson was slightly more active (52.6 to 49.8 punches per round) but Hitchins was more accurate and the more robust body puncher. Hitchins landed on 30 percent of his power punches, while Johnson landed just 19 percent of his, and Hitchins connected on 46 body shots compared to 30 for Johnson.

“Johnson was a solid fighter,” said Hitchins. “I haven’t been in the ring since April, but I think I did great. It was the fight that I needed. I wanted the win and I got the unanimous decision. I don’t like to rate my performance without going back and re-watching the fight. I could have closed the gaps a little better. I should have capitalized on certain moments a little better.

“I’m going to run the tape back and work with my coach so we can tighten up and come out the best I can possibly be. I’m excited to see what’s next and what my team has planned for me. They’ve guided me in a great direction and I just got to do what I got to do and that’s getting these guys out one at a time until I get that title shot.”

Johnson, who performed admirably, was gracious in defeat, despite disagreeing with the judges’ scorecards.

“He had a good jab,” Johnson said. “It was easy to download him. I put the pressure on him and kept listening to my corner, and moved to the right and kept landing. He’s a tough fighter. I’ll give him that, he definitely came to fight. We both had moments throughout the fight. He did a good job of holding as the ref called, he knew how to hold when he was getting hurt. I think I was the better fighter. He never hurt me. I give him props as a fighter.

“I really want the rematch, but I doubt that will happen. I know I won. I was the better fighter at the end of the day.”

In a much-anticipated rematch between two fighters with history and bad blood, Kevin Newman II (11-1-1, 6 KOs) avenged the only loss of his career, dominating Marcos Hernandez (14-3-1, 3 KOs) with a near shutout unanimous decision. The judges scored the fight 80-72 and 79-73 twice.

Completing the full eight-round distance for the first time in his career, Newman, who is trained by former world champion Bones Adams, dominated the second half of the fight. He landed 82 total punches to 46 against in rounds five through eight and was able to establish a lethal body attack that wore down Sacramento’s Hernandez, connecting on 79 body shots compared to just 10 for Hernandez. Newman also led 152-97 in overall punches landed and 114-57 in power shots, while nearly matching Hernandez in punches thrown (399 to 435).

“The revenge felt so great,” said Las Vegas’ Newman, who dropped a unanimous decision to Hernandez on the undercard of Mayweather vs. McGregor in August 2017. “Overall, I dominated. I went to the body every chance I saw an opportunity. A lot of people have never seen me box like that so it’s great to show that side of me. I was a lot more offensive and I kept the attacks to the body.

“I’d rate my performance a B-, I think I could have been busier. I’m going to continue to developing and staying busy in the ring. I don’t think he expected me to come in like I did. We gave the fans a great performance that was TV worthy and I look forward to doing it again.”

In the telecast opener, undefeated knockout artist Rolando Romero (10-0, 9 KOs) extended his KO streak to five in a row and improved his knockout rate to 90 percent by dismantling previously once-beaten challenger Juan Carlos Cordones (14-2, 9 KOs) with a first-round knockout.

The 24-year-old Las Vegan floored Dominican Republic’s Cordones with a combination and finished the job shortly after with a flush right to the jaw. Cordones was unable to get up off the mat, and the fight was stopped just 2:14 after it started. Looking for the knockout from the opening bell, the aggressive Romero threw twice as many punches (35-17), led nine to three in overall punches landed and connected on eight of his 18 power punches.

“There’s not much to say. I promised a knockout and I saw the opportunity so I went for it,” said the exuberant Romero, who has previously stated he is the hardest puncher in the world under 147 pounds. “I made him pay for coming in overweight yesterday. Looking ahead, I just plan on dominating whoever they put in front of me.

“I’m growing as a fighter and all I want to do is continue to put on a great performance for my fans and get to that next step in my career. I want anyone whoever wants next!”

The stars of the boxing world were out in Las Vegas, as promoter and future Hall of Famer Floyd Mayweather and former and current world champions Gervonta Davis, Badou Jack, Adrien Broner, Claressa Shields, Devin Haney and Shakur Stevenson were all in attendance at Sam’s Town Live.

Davis, Jack and Chris Eubank Jr. all spoke with SHOWTIME expert analyst Steve Farhood to preview their upcoming fights on the network.

“I decided to move up in weight because I have a chance to win a world title in two different weight classes,” said Davis, who faces former unified champion Yuriorkis Gamboa for the WBA lightweight title December 28 in Atlanta. “We know Gamboa is a tough opponent and we won’t sleep on him. I wanted to share the ring with somebody great. Of course Gamboa is my toughest opponent to date. I’m going to train hard for him, he’ll train hard for me and we’ll give the fans what they want to see.

“I’m just excited to be back,” said two-division champion Jack, who will face WBA light heavyweight champion Jean Pascal in the co-featured bout on December 28. “That last loss to Marcus Browne was an accident. I’m more motivated than last time. I’m hungry to get in there and get my titles back.”

Middleweight star Chris Eubank Jr. will make his United States debut on December 7 in Brooklyn when he takes on Matt Korobov.

“This has been a long time coming,” he said. “I’m coming over here to the States to take over. This is the perfect opportunity. I’m in the prime of my life and I can’t wait to get out there and show you guys what I’m made of.”

.@ChrisEubankJr talks to #ShoBox analyst @SteveFarhood about coming to 🇺🇸 to takeover. #EubankKorobov 12.7 for the Interim WBA Middleweight Title on @showtime. pic.twitter.com/f6FQqXK7Hb

Promoter Floyd Mayweather also spoke to Farhood during the live telecast in which four of his top prospects impressed.

“When I see potential in a fighter, I want to take them to the next level,” the all-time great said. “I’m always on the lookout to find the next Floyd Mayweather. I like to give fighter pointers about the small things. Nothing comes overnight. It’s all about working hard and surrounding yourself with a positive team.”

Friday’s fights were promoted by Mayweather Promotions. The full telecast will replay on Monday, November 4 at 10 p.m. ET/PT on SHOWTIME EXTREME and will be available on SHOWTIME ANYTIME® and SHOWTIME on DEMAND®.