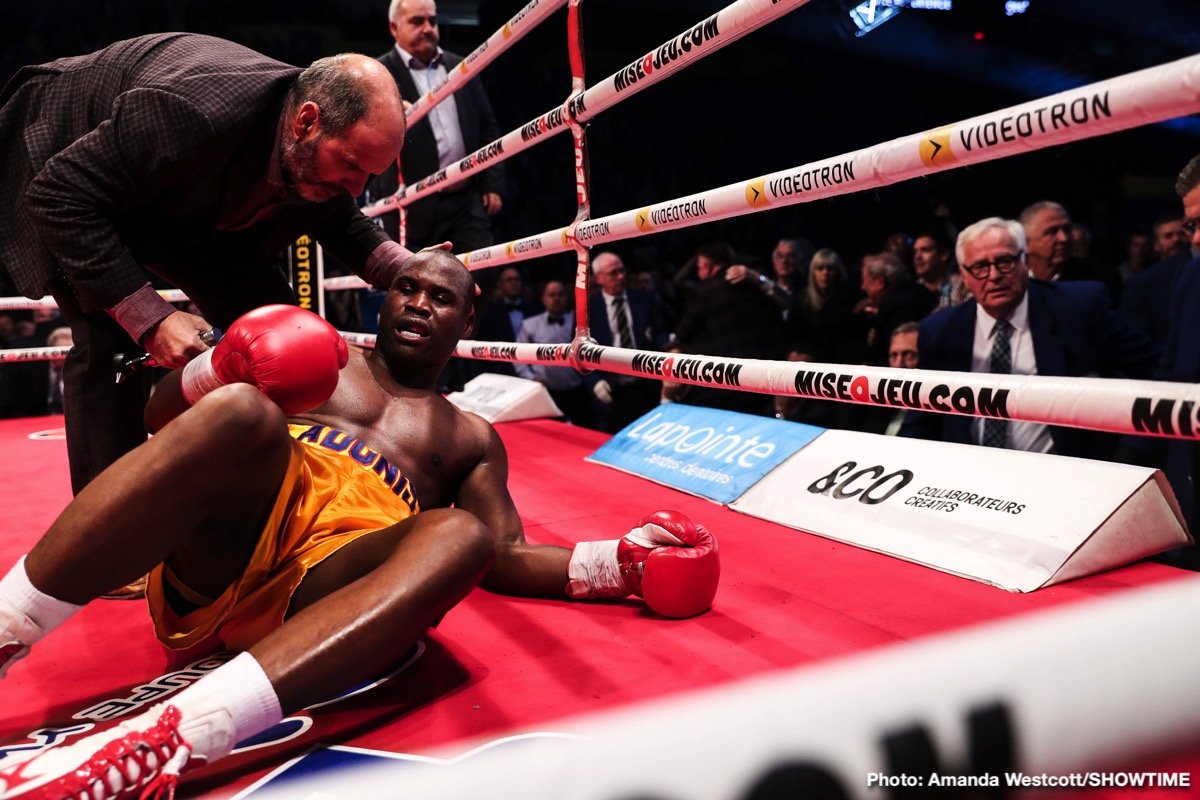 Behind on the scorecards, unbeaten Olekandr ‘The Nail’ Gvozdyk (16-0, 13 KOs) rallied to stop World Boxing Council light heavyweight champion Adonis Stevenson (29-2, 24 KOs) in the 11th round on Saturday night in front of a packed house at the Centre Videotron, Quebec City.

Despite being hurt a number of times in the fight, Gvozdyk was able to come back and stop Stevenson with a storm of shots in the 11th round. Referee Michael Griffin waived off the fight without even looking back at the fallen 41-year-old Stevenson. Initially it looked like a quick stoppage, but it turned out to be the correct move, as Stevenson wasn’t going to be able to beat the count. The official time of the stoppage was at 2:49 of round 11.

At the time the fight was halted, Stevenson was ahead on two of the judges’ scorecards by the scores 98-92, 96-94, and 95-95. Boxing 247 had Stevenson ahead 9 rounds to 1 at the time the fight was stopped in the 11th. Before the stoppage, Gvozdyk fought well enough to win the 3rd round after knocking Stevenson to the canvas with a wicked right hand that caught him flush to the face. Referee Michael Griffin waived it off calling it a slip on Stevenson’s part.

Seven rounds later, Griffin failed to score a knockdown of Gvozdyk after he was hit with a monstrous left hand from Stevenson that knocked him into the ropes. The ropes held the hurt Gvozdyk up, so it should have been a knockdown. Gvozdyk held on for the next 20 seconds to recover from the big left hand from Stevenson. Gvozdyk did a good job of coming back from the knockdown late in the round and hurting Stevenson with a five-punch combination. Those punches came at the very end of the round, and they seemed to take everything out of Stevenson. Further, Stevenson had also punched himself out going for the knockout.

It was a good effort from Gvozdyk in coming back to get the stoppage win over Stevenson. However, it wasn’t the type of performance from Gvozdyk that suggests that he would beat WBA champion Dmitry Bivol or IBF champion Artur Beterbiev. Those guys look like more solid fighters than Gvozdyk. He’s not active enough, and he gives away too many rounds for him to beat Beterbiev and Bivol. Gvozdyk couldn’t count on those guys getting tired the way the 41-year-old Stevenson did tonight. It’s going to be up to Top Rank to make a decision who they want to match Gvozdyk up against. If they choose to have him milk his title against one of their own fighters, then it wouldn’t be surprising to see him fight one of their super middleweights like Jesse Hart or Gilberto Ramirez. There are some good light heavyweights in the World Boxing Council’s top 15 like Badou Jack and Marcus Browne. Gvozdyk would need to raise his game to beat those guys. He can’t away most of the rounds hoping that he can come on late to get a stoppage like he did tonight.