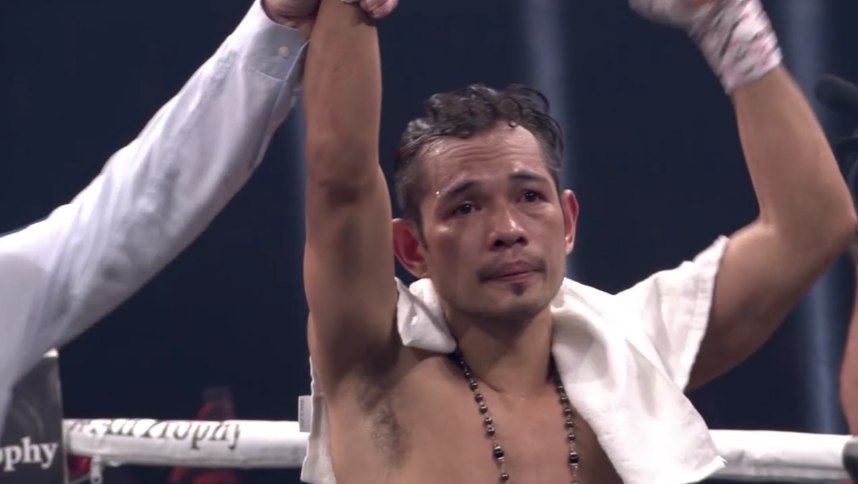 Nonito Donaire (39-5, 25 KOs) was the beneficiary of a freak back injury that WBA Super World bantamweight champion Ryan Burnett (19-1, 9 KOs) suffered in round 4, causing him to bow out of the fight at the start of the 5th round on Saturday night in the World Boxing Super Series bantamweight tournament at the SSE Hydro in Glasgow, Scotland.

Burnett dropped to his one knee after in round 4 in a delayed reaction after getting hit by a big right hand from Donaire. The shot seemed to snap Burnett’s head back, and that might have resulted in him injurying his back. Burnett clutched his back with a look of pain after he got back to his feet.

Donaire charged forward and started raining shots against Burnett, who had backed up against the ropes in a last stand. Burnett tried to fire punches back in defense, but it was no use. Donaire was raining monstrous powers shots down on him as he ducked low against the ropes. It was fortunate for Burnett that the round ended before Donaire could finish him off. Burnett wouldn’t have been able to take too much more punishment from Donaire if there was another 20 seconds left in the round.

Up until the injury, it was an exciting fight with a lot of two-way action. Donaire’s far superior punching power allowed him to take over the fight beginning in round three. Donaire started to catch Burnett with blistering shots that was taking the energy out of the Irish fighter. The injury might have been a byproduct of Donaire’s monstrous power shots that he was hitting Burnett with. Burnett was taking shots that was doing a number on him, draining him like a battery. You’ve got to give Burnett credit for taking the punches that he did absorb from Donaire, but it was obvious that the fight wasn’t going to go too much longer with the way that he was getting hit by the powerful Filipino star.

First off, I want to acknowledge and thank God and my Archangels for everything they put before me tonight. 🙏 Next I would like to send prayers of healing to Ryan Burnett and thank him for sharing the ring with me. I know he'll heal up and be back in the ring soon! pic.twitter.com/cJoOulLnVW

After the fight, Donaire expressed regret that he won the fight based on an injury to Burnett, but he felt confident that he was going to get to the Irish fighter sooner or later due to the punishment he was inflicting on him.

With the win, Donaire advances to the semifinals of the World Boxing Super Series to face WBO bantamweight champion Zolani Tete in early 2019. That should be an interesting fight, as Tete is a big puncher with talent. Tete, however, hasn’t faced anyone as talented, powerful or as experienced as Donaire. We might see Donaire get another knockout when that fight comes around.