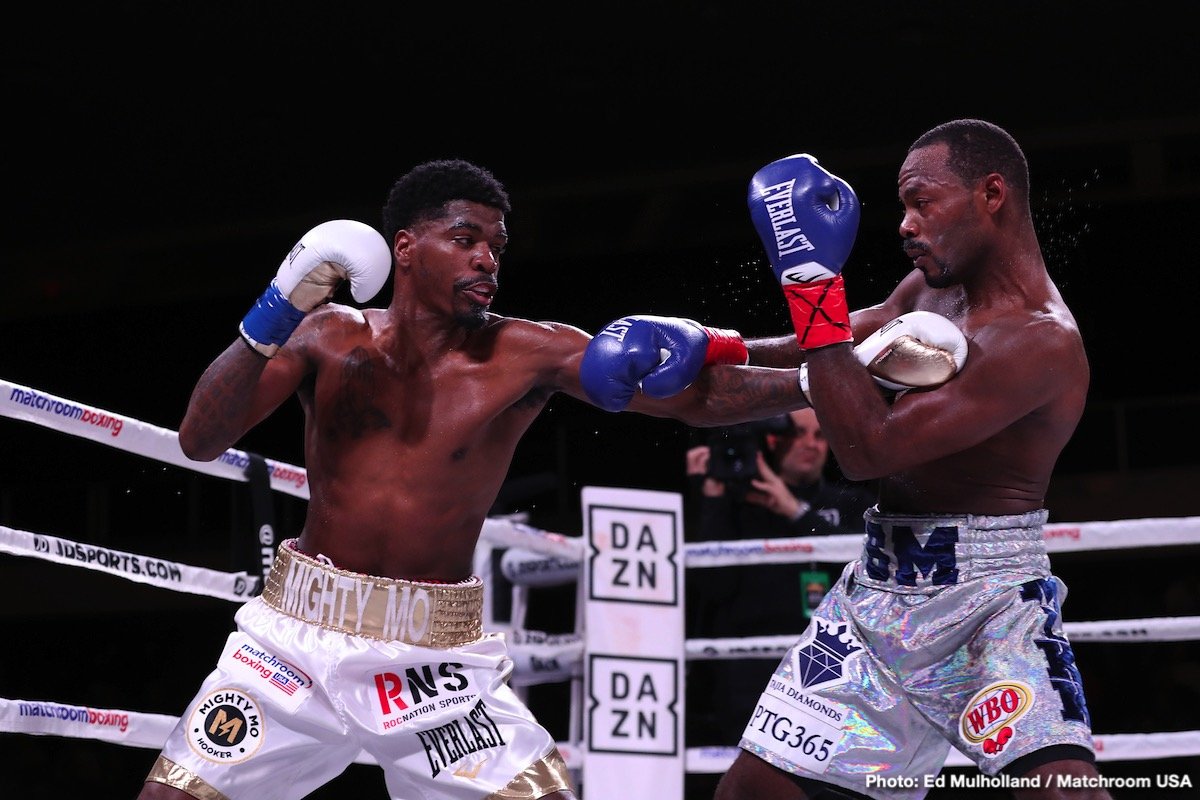 Roc Nation Sports and Matchroom USA boxer Maurice Hooker (26-0-1, 17 KO’s) successfully defended his title for the second time, dominating challenger Mikkel LesPierre (21-1, 10 KO’s) by way of unanimous decision in a primetime bout broadcast on DAZN and Sky Sports at the Turning Stone Resort & Casino in Verona, N.Y. With this being Hooker’s first fight of 2019, he has already proven he stands amongst the top contenders in the world and looks to return to his hometown of Dallas, Texas for his next big bout.

“I told everyone I was the best and I proved it again,” said Hooker. “Now I need to bring this belt back home to Dallas. I want to give my hometown a show they won’t forget and continue to shock the world with my abilities. I’m ready for the next big thing. My long-term goal is also to unify the belts, I want them all!”

Hooker’s win over LesPierre is his third consecutive bout in which he beat his opponent as a road warrior. Hooker previously defeated Alex Saucedo (28-1, 18 KO’s) in Saucedo’s hometown of Oklahoma City in November 2018. Although Saucedo did manage to knock the champion down in an early round, Hooker bounced back with a mixture of jab and hook combinations, resulting in a spectacular display and TKO in the seventh round.

Hooker’s next bout will be announced soon but he hopes this most recent win will secure a chance to dominate in his native Dallas, TX. It would mark Hooker’s first fight in Dallas since he captured the championship belt on June 9, 2018 when he defeated Terry Flanagan via split decision in the opponent’s native city of Manchester, England at the Manchester Arena.

“Everyone knows Mo struggled a bit to make his weight for this bout. His shutout performance win over LesPierre under physical adversity is just another example of the incredible fighter he is. That’s what champions do,” said Roc Nation Sports boxing promoter Dino Duva. “I’m confident he will learn from this. He has fought long and hard for the chance to bring the belt back to Dallas and we now intend to give him that fight as soon as possible.” 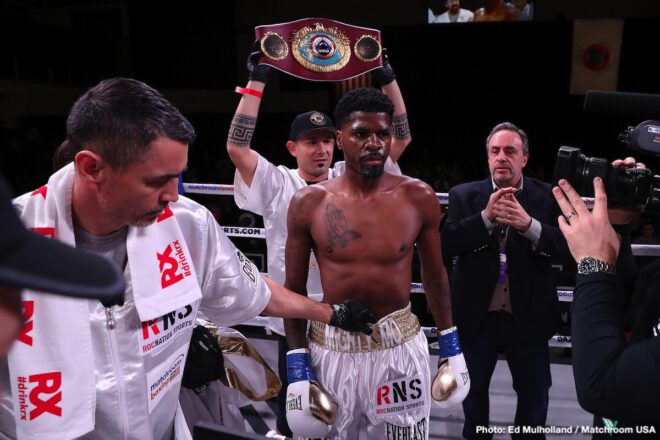 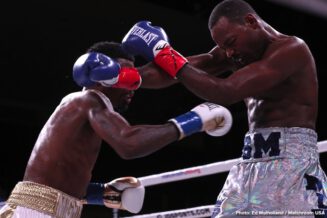 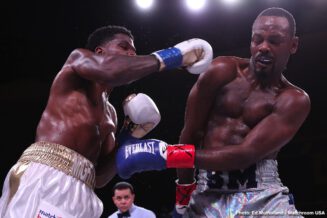 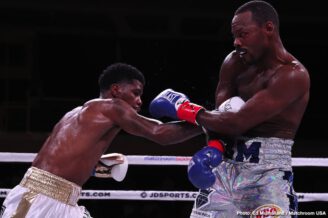 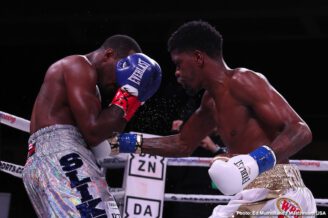 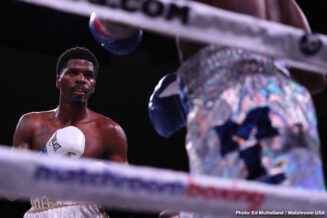 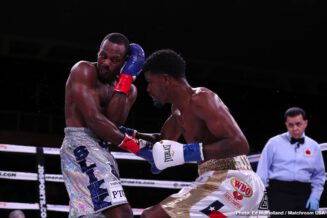 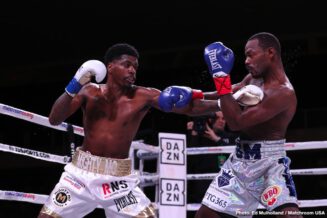 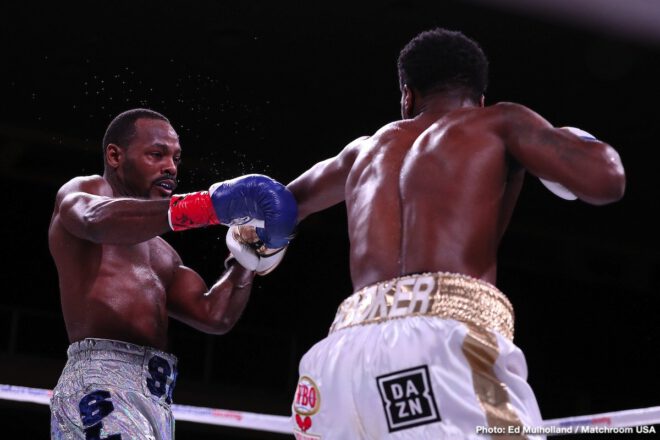 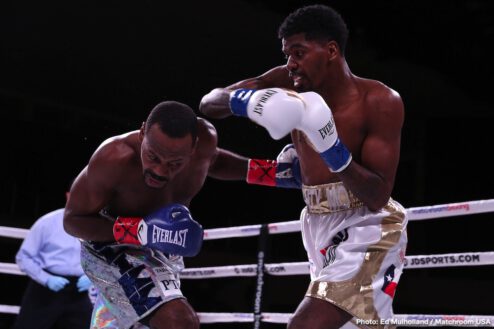 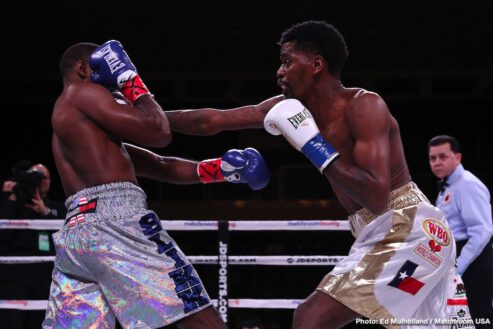 Jones, who is managed by Split-T Management. was impressive by landing quick combinations against the tough fighter from New York. In round four, Jones registered a knockdown, and came home with the victory by scores of 59-53 and 58-55 twice.

Taking on such a tough opponent who came in with a 5-1 record, and had an amateur record of 110-10, and was a three-time national champion in his home country in the Republic of Georgia, in his maiden voyage, garnered Jones a lot of respect on social media after the fight, which was streamed live on DAZN.

“I fought a good fighter who had a solid record in my 1st pro fight,” said the 18 year-old native of Toledo, Ohio. “I was very excited, and the crowd got to me which caused me to try to bang and knock him out. I just had to be reminded to keep my composure and stick to the game plan. I am looking to fight soon and want to fight great competition.

“A lot of people were questioning me when we chose Giorgi Gelashvilli as the first opponent. OJ3, himself wanted to show the world that he stood out from all the other prospects by making a statement and defeating another up and coming prospect, who was a 3-time national champion in his home country. This win makes him stand out like he did when he was among other champions in the amateur ranks,” said Jones Father/Trainer, Otha Jones Jr. “The world is going to see OJ3 is a force to be reckoned with and will no doubt be Eddie Hearn’s next star in boxing.”

“I am very proud of this young man. He looked for the toughest opponent Matchroom would give him, and he made a big statement,” Said David McWater of Split-T Management.

Unbeaten featherweight prospect José “El Chocolatito” González (12-0-2 4KOs) made a statement by defeating David Berna (17-7, 16 KOs) via dramatic knockout in the first round, in which Gonzalez dropped Berna three times en route to victory in a show-stealing performance from The Amazura Concert Hall in Queens, New York, promoted by Ronson Frank’s Uprising Promotion.

Berna has been in with world-class competition as he was stopped in two rounds by two-time Irish Olympian Michael Conlan, which is a round longer than Gonzalez took to finish his opponent. as well in his last fight fought former world title contender Christopher “Pitufo” Diaz, who also stopped Berna in one round.

For those looking at the nickname, “Chocolatito” and it might sound familiar as former pound-for-pound #1 fighter Roman “Chocolatito” Gonzalez, used the moniker. Well – that is Jose’s cousin. In fact, Jose’s father, Martin Gonzalez was the original Chocolatito, when he was boxing, and Jose Gonzalez looks to be the next great Chocolatito, something that his last performance showed.

“I fight for the pride of my family and to be a good role model to those who look up to me because I am a professional boxer. I am a 22-years-old and it is time for me to fully commit to the sport of boxing. I know that I have a long way to go, but I am here to entertain and put on a great show, I am very excited about the future. I have a lot to learn in and out of the ring, but I will stay humble and grow.” said Jose Gonzalez after the bout.

Gonzalez, who spent a week with famed coach Raul “Chino” Rivas in Cherry Hill, New Jersey, leaving behind his life in upper Manhattan for a week to change things up for this camp. Rivas took to Gonzalez as he assisted him in the corner fight night while Gonzalez’s father ran the corner fight night, which produced the amazing result of a first-round knockout.

“Being able to train beside Tevin Famer, a world champion and work with Coach Chino, who is a great coach as well as work with my father who has taught me everything I know and built the foundation to make me a world champion — it is amazing. I am adding so much to my boxing ability. I have a great team and now it is time for me to focus on becoming a world champion. I am in the perfect situation.”

For those unfamiliar with Gonzalez, he was born and raised in Harlem, New York, holding an amateur record of 34-6, winning the Junior Olympics in 2011 and the New York Golden Gloves in 2014.

“I feel I have the best team in boxing, they’re very professional and when I am more successful as a professional boxer, you will see the fanbase I have in Wall St., as well as my neighborhood I grew up in. I have a unique story, a unique team and a unique skill set, I am ready for the next fight and for fans to form an opinion on the way I fight.”