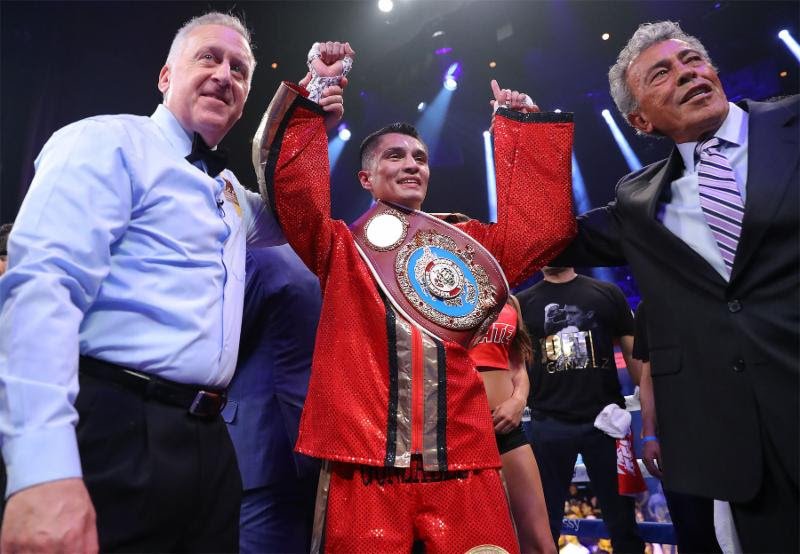 Rising featherweight contender Joet Gonzalez (20-0, 11 KOs) of Glendora, Calif. captured the vacant NABO 126-pound title via split decision victory against Rafael ‘Big Bang’ Rivera (25-2-2, 16 KOs) of Tijuana, Mexico in the 10-round main event of the July 13 edition of Golden Boy Boxing on ESPN at The Novo by Microsoft at L.A. LIVE in Los Angeles. In what was a close and competitive fight, Gonzalez won with scores of 96-94 and 97-93, while one judge had the fight 96-94 for Rivera.

“I felt like I dominated the majority of the fight, at least seven of the rounds,” said Joet Gonzalez.”This was definitely my toughest fight going all the 10 rounds. I’m satisfied with my performance, and I’m happy to have this new belt. I’ll fight anyone at 126 for a world title – that’s what I want! I feel great and it was a pretty exciting fight!”

“I felt I won the fight,” said Rafael Rivera. “He never hurt me, but this is boxing. I came from Tijuana, so I knew this would happen. This is what happens when you go into someone’s back yard. Utilizing my distance and landing counter punching were important keys in this fight. I’m happy with performance and my preparation, but like I said I feel I won this fight.”

Seniesa “Super Bad” Estrada (14-0, 4 KOs) of East Los Angeles, Calif. shined with a third-round technical knockout victory against Jhosep Vizcaino (6-7, 3 KOs) of Quito, Ecuador in the scheduled eight-round co-main event in the flyweight division. Estrada dominated Vizcaino with superior speed and skill, forcing the fight to end at :20 of the third-round.

“I had a great camp. I worked on sharpening and shortening up my punches,” said Seniesa Estrada.”As you can see, the hard work in camp paid off. I’m getting more comfortable in the ring because I’m now with a promoter. Golden Boy Promotions is keeping me busy, so I’m fighting more consistently. Having me stay busy is the most dangerous thing for my opponents.

Maricela “La Diva” Cornejo (12-2, 4 KOs) scored a third-round technical knockout victory against Samantha Pill (3-1) of Fairmont, West Virginia. Cornejo, under the tutelage of Antonio Diaz, demonstrated improved skills as she pushed forward and landed hard left and right hands before stopping Pill at :41 of the third round.

“I feel good. I’m very happy with the camp we had with my head trainer Antonio Diaz,” said Maricela Cornejo.”In this fight, I just had to adjust to her being six feet tall. Fighting Pill just showed only a little of what I’m capable of. I can’t wait to fight an even better opponent to show all of my capabilities.”

Richard “Kansas Kid” Acevedo (3-0, 3 KOs) of Garden City, Kansas scored a third-round technical knockout victory against Quantavious Green (1-3-1, 1 KO) of Shreveport, Lousina. Acevedo was too big and too strong for the shorter Green. Acevedo landed Several unanswered combinations, which forced the referee to stop the fight at :40 of the aforementioned round.

“I saw that there are things I need to work on,” said Richard Acevedo. “But I’m happy I got the rounds in. I’ll be back in the gym Monday to keep getting better and better, so I can come back and show my improvements.”

“It’s hard to stop a guy who comes to survive,” said Christian Gonzalez. “But overall I’m happy with my performance and with the new things I am learning in camp.”

Gonzalez vs. Rivera was a 10-round fight for the vacant NABO Featherweight Title presented by Golden Boy Promotions. The event is sponsored by Tecate,”THE OFFICIAL BEER OF BOXING” and Hennessy,”Never Stop, Never Settle.” The fights took place on Friday, July 13, 2018 at The Novo by Microsoft at L.A. LIVE.

Photos and videos are available to download by clicking here or copying and pasting link: http://bit.ly/GonzalezRivera into a browser. Credit must be given to Golden Boy Promotions for photos and videos used.