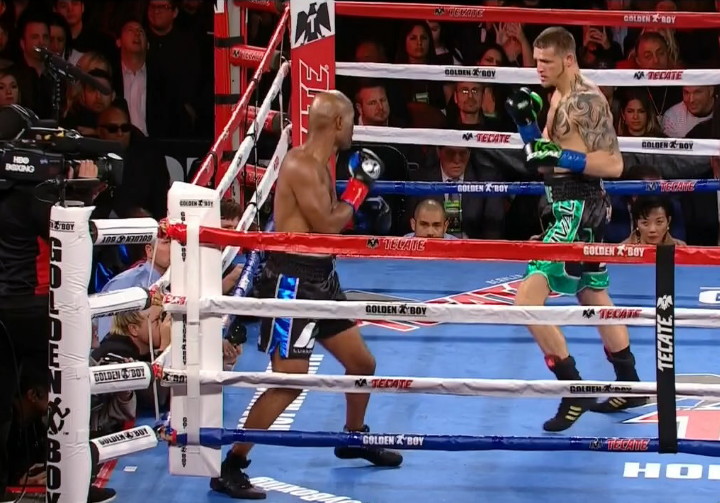 Bernard Hopkins, (55-8-2, 32 KOs) saw his career end in a less than glorious way on Saturday night in getting knocked out of the ring in the 8th round in losing a TKO to knockout artist Joe Smith Jr. (23-1, 19 Kos) on HBO Championship Boxing from the Forum in Inglewood, California.

Hopkins, 51, was doing well in the fight until the 8th round. Hopkins caught trapped against the ropes by Smith Jr. and hit with five sledgehammer head shots one after another. The final punch of the sequence, a monstrous left hook, knocked Hopkins clean out of the ring. Hopkins still had a chance to return to the ring and continue fighting, but he complained of being injured from the fall.

Hopkins said his angle was injured and tingling. He didn’t think he could put weight on it. The fight was then stopped and the 27-year-old Smith Jr. was given an 8th round technical knockout. Hopkins complained bitterly that he’d been shoved or bumped out of the ring by Smith Jr., but he replays didn’t backup what Hopkins was saying. The replay of the incident showed Smith landing nothing but head shots. Hopkins fell out of the ring after getting hit with five straight shots to the head by Smith.

Hopkins looked like he was on his way to a victory at the time of the injury. Smith was doing very little after the 2nd round other than missing shots or having them blocked by Hopkins. Smith Jr. wasn’t letting his hands go in the way that he needed to when he was standing in front of Hopkins.

It was tough for Smith to catch up to Hopkins, because he was using frequent movement the entire fight. Hopkins’ trainer John David Jackson was telling him between rounds to “keep walking around the ring like you’re doing.” Hopkins movement and his expert clinching was giving Smith fits. It had his work rate reduced to a crawl after the 2nd round. Those were the only rounds that you can argue were Smith Jr. rounds.

Hopkins took over the fight in the 3rd and was running away with it until the 8th. In hindsight, Hopkins probably shouldn’t have fought with his back against the ropes. Hopkins was a sitting duck for Smith Jr. in the 8th when he suddenly stopped moving and tried to have a last stand.

As good a boxer as Hopkins is, he looked hurt when he was knocked out of the ring after getting hit by a flurry of power shots from Smith in the 8th. There’s no shame in Hopkins getting caught. Every fighter gets hurt sooner or later if theyn stick around the game long enough. The 51-year-old Hopkins stuck around the sport long enough for him to experience his first knockout loss. If Hopkins decides to come back and fight Smith Jr. again, I suspect he’ll get knocked out again. If Hopkins comes back and fights Adonis Stevenson, Artur Beterbiev, I think he’ll get knocked out again. He’s old now, easy to hit, and no match for the big punchers.